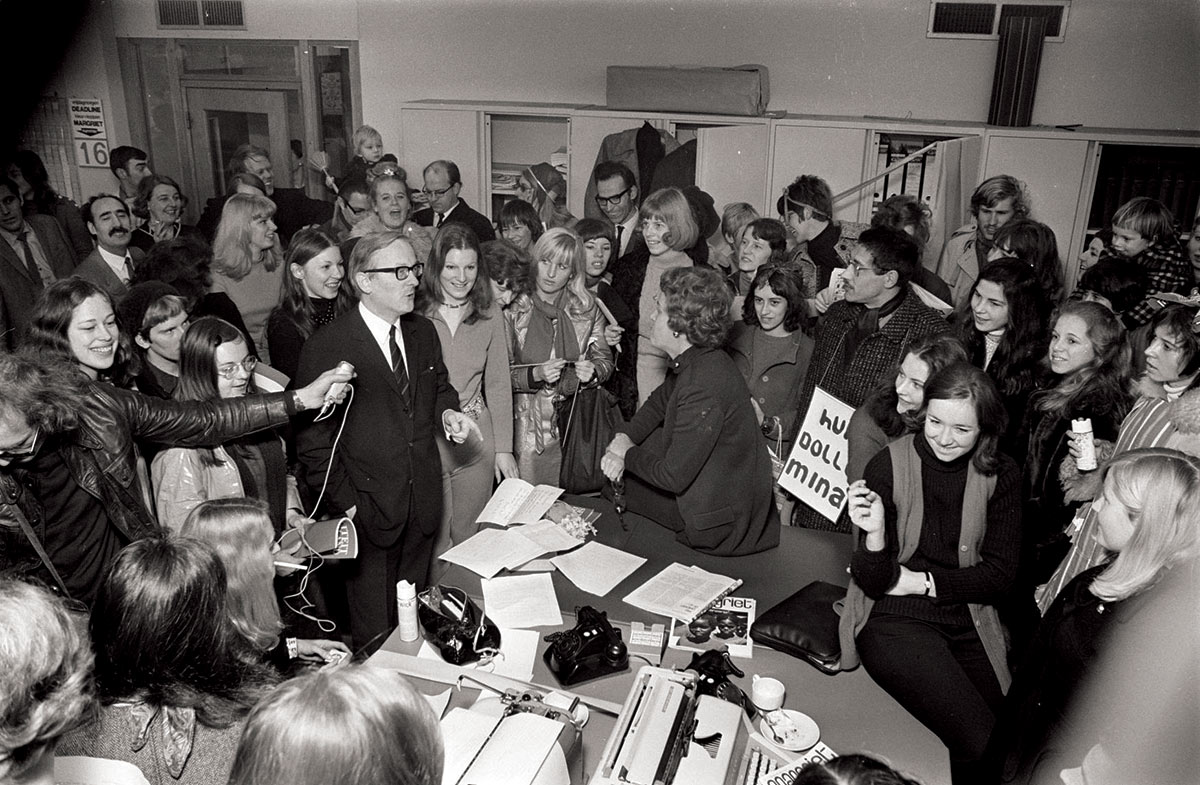 In January 1970, feminist protesters occupied the Beursplein, one of the most popular squares in Amsterdam, to criticise the deficiency of Dutch childcare services. Toddler-filled playpens were placed in front of the Amsterdam stock exchange – a notoriously male-dominated workplace – in an attempt to articulate a message in a single, striking image: that the prestige of a man’s work was in stark contrast to the austerity of a woman’s labour. These crèche-acties (day-care actions), which were repeated in different locations throughout the early 1970s, formed just a part of the repertoire of Dolle Mina (Crazy Mina), a group of second-wave feminists formed in 1969. Taking their name from the fin de siècle feminist Wilhelmina Drucker, Dolle Mina sought to publicise the gender inequality of everyday life in the Netherlands through a series of spectacular public interventions.

A little later than its emergence in the United States, second-wave feminism reached the Netherlands in 1967, with the publication of Joke Kool-Smit’s Het Onbehagen bij de Vrouw (The Discontent of Women) in the prominent Dutch literary journal De Gids (The Guide). Smit, who co-founded the feminist network Man-Vrouw-Maatschappij (Man-Woman-Society, or MVM), argued that the paid work of a married woman was devalued by Dutch society and led to a state of ‘exhaustion without reward’. MVM used peaceful and tactical lobbying as a path to positions of governmental power. But for Dolle Mina, emerging two years later, these strategies lacked the radical, performative edge that would soon gather attention across Amsterdam.

Throughout the ‘Dutch sixties’ – a period defined by social historians Kees Schuyt and Ed Taverne as ranging from 1965 to 1976 – protest groups and artists alike had used the city as a canvas for their radical ideas. Provo, the countercultural anarchists, staged a series of pranks and provocations to disseminate their ‘White Plans’ – innovative solutions for the social, ecological and familial problems of postwar Dutch society – while the conceptual artist Robert Jasper Grootveld hosted weekly ‘happenings’ to protest against the tobacco industry. Alongside these, artists such as Wim T. Schippers, Bas Jan Ader and Stanley Brouwn had employed playful public and urban intervention in a method that the art historian Janna Schoenberger neatly labels ‘Ludic Conceptualism’.

For Dolle Mina, the engagement and indelibility that came with this kind of public spectacle provided the most effective means to diffuse their message across the widest possible landscape. In April 1970, in Amsterdam’s Dam Square, Dolle Mina installed a towering papier-mâché penis with a sign that read ‘damestoilet’ (ladies’ room). The structure served as a women’s powder room – to address the shortage of public women’s toilets in Amsterdam – and was designed to mimic the voyeuristic rendering of women into neon signage for bars. This ‘penis-actie’ (penis action), in which they also distributed free condoms and pasted images of nude men over those of nude women, served not only as an alternative to the male-dominated public space in 1970s’ Netherlands, but also as a parody of its male-oriented visual culture.

While inspired by Amsterdam, Dolle Mina’s actions were not limited to the city’s confines. Protesting against the state’s anti-abortion laws – a product of the 1911 ‘Morality Acts’ established under the leadership of the Protestant Christian Anti-Revolutionary Party – Dolle Mina gatecrashed a gynaecology conference in Utrecht, the religious capital of the Netherlands. Pulling their shirts up under their breasts, demonstrators revealed a chorus of handwritten declarations that read: ‘Bass in eigen Buik’ (Boss of my own Belly). Trading the prosaic placard for the surface of their own skin, Dolle Mina had combined the performances of the conceptual artist with the directness of the protester.

Aside from the interactive dissemination of ideas through public performance, Dolle Mina were also keen to engage with the Netherlands’ traditional media platforms. Earlier in the year, armed with dusters and mops, Dolle Mina had stormed the editorial offices of Margriet, a women’s weekly magazine. Frustrated by the publication’s focus on domestic responsibilities, activists wiped sponges across the windows and chanted ‘cleaning, cleaning’ as they went. According to Saskia Poldervaart, who took part in Dolle Mina’s occupation that day, activists even carried stencils condemning Margriet’s intoxication of ‘the Dutch housewife proletariat’. Although perhaps an unfair indictment of Joop Swart’s editorship in the latter half of the 1960s, Dolle Mina’s invasion of the offices of Margriet – which had a peak circulation of around 800,000 subscribers in the mid-1960s – was a clear sign of Dolle Mina’s understanding of the importance and reach of the media. Their small group was expanding into a national movement.

Having started in 1969 as a tight-knit collection of around 19 socialists, women and men, by the end of 1970, Dolle Mina counted a network of almost 5,000 activists across the Netherlands. This network was made possible by the growth of television in the 1960s and 1970s. On Saturday 24 January 1970, journalists from the current affairs programme Brandpunt (‘Focal Point’), followed Dolle Mina around Amsterdam, where they had organised a series of ‘actions’ in preparation. Broadcast that evening, an estimated four million viewers – by 1966, three quarters of Dutch households owned a television – watched Dolle Mina catcalling and harassing men in a gesture that attempted to subvert the widespread objectification of women on Amsterdam’s streets. This action, the nafluit-actie, gained particular notoriety in the media, with the New York Times running an article the following May with the headline ‘Dutch Women’s Lib: Whistling at Men’.

In the years that followed, the provocative nature of Dolle Mina’s protests, and the frequency with which they were performed, began to slow. After only a handful of demonstrations in 1971, from 1972 onwards their programme was almost entirely limited to more conventional means: the establishment of working groups, a publishing foundation and the proposal of their ‘Werkende Wijvenplan’ (Working Bitches’ Plan). Yet, like the parallel protagonists of the Dutch sixties, Provo, Dolle Mina’s ‘ludic’ actions, and their proliferation in the media, left an enduring impression on the cultural imagination of Dutch youth.

Alex J. Todd is a lecturer in visual culture at the University of Portsmouth.