Power to the People

What’s the point of petitions? 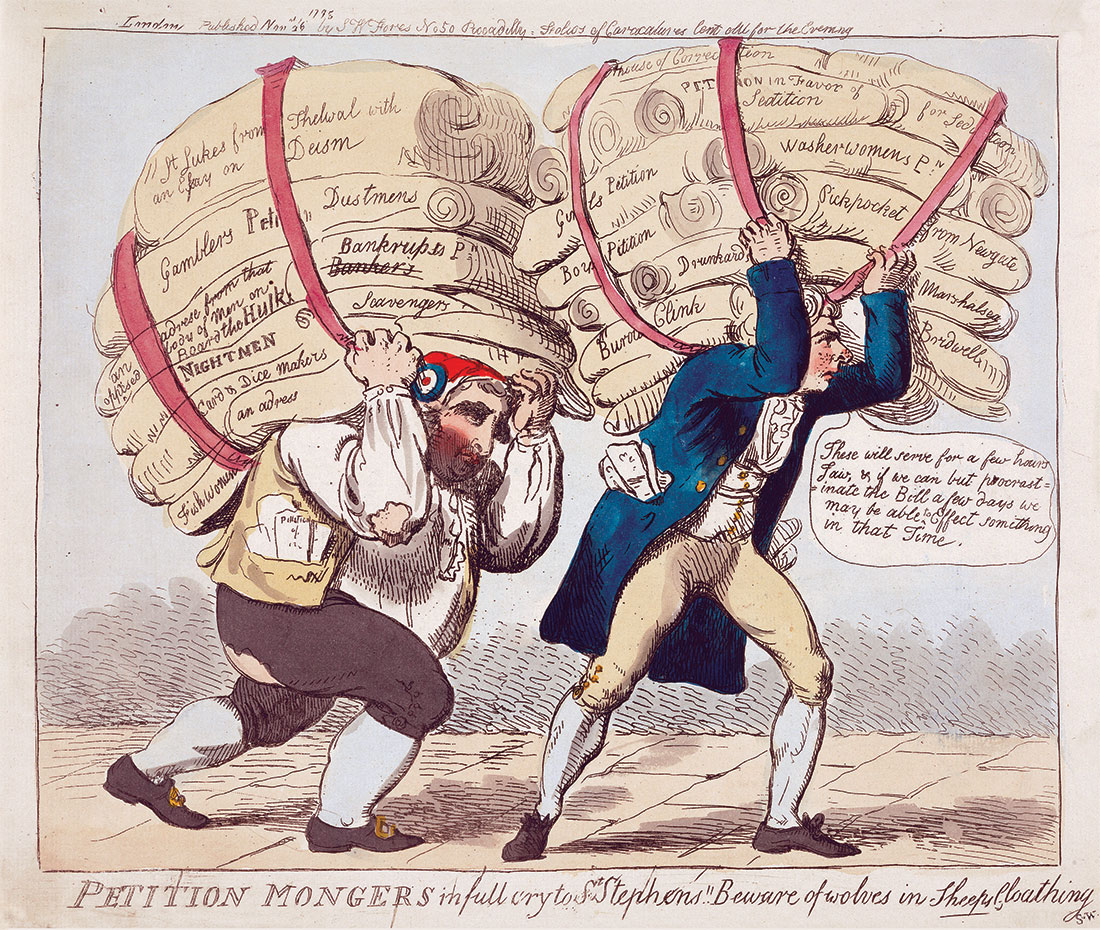 In March 2019, a petition calling for Article 50 to be revoked, thus cancelling Brexit, garnered six million signatures. This exceeds by a million what was probably the largest previous petition in British history presented to Parliament – in favour of an increase in old-age pensions in July 1939 – and by a million and a half the 4.5 million who signed in support of ambulance workers in 1989, then in dispute with the government over a pay settlement. The petition to revoke Article 50 exceeds the proportion of the electorate signing in 1989: nearly 13 per cent of the electorate has subscribed to date, compared with 10.4 per cent in 1989. But it has not yet reached the mobilisation seen in 1939, when 16 per cent of the electorate backed a pension increase.

Before universal suffrage, earlier petitions represented proportionally larger numbers of the population: the 1842 Chartist petition gathered the signatures of a third of the adult population (3.3 million) and the abolitionists cited 390,000 supporting signatures in their campaign of 1792 (around eight per cent of those aged over 14). Less well known is that around a tenth of Welsh adult males signed a successful 18,000-strong petition in 1689 to abolish the ‘arbitrary’ court of the Council of the Marches, in a period with a far less developed news culture and transport system.

The size of such petitions, and their ability to set political agendas, is why historically, as now, extensive popular involvement produced allegations that signatures were fake or gathered under false pretences. John Oldmixon, one critic of petitions during the reign of Queen Anne, questioned the credibility and knowledge of petitioning Cornish tin miners. In one pamphlet he wrote that they ‘were not their own masters; they had words put into their mouths, and pens into their hands. [In] living altogether underground, they could not tell what was doing above’.

In response to such criticisms, early modern petitioners sought to demonstrate their credentials as independent and expert voices. In contrast to modern practice, where only names and addresses of subscribers are taken, earlier petitioners would cite their occupations or social status and even sometimes state their financial worth or the amount of goods they produced in an attempt to demonstrate their good sense and industrious character. Petitioners frequently asked Parliament not to consider their numerical strength, but their importance to society. In one case, petitioning inhabitants from Edinburgh argued that they represented ‘more property in the town, than the whole … council put together’, suggesting MPs should favour their petition over that of the local magistracy.

Whether a petition succeeds, and what the interpretation placed on the geography and number of subscribers will be, is ultimately a matter for politicians and the public. But there are significant reasons to gather a petition other than seeking a change in policy. Petitions often create important political legacies, if organisers build on the political momentum that such campaigns produce.

In the centuries before universal suffrage, petitioning was an indispensable tool to represent public opinion and highlight issues of complaint to Parliament.

First, petitions provided MPs and peers with a sense of where public opinion lay. During the 18th century, the Whig oligarchy reduced the frequency of general elections from every three years to every seven. The passage of the Septennial Act in 1715 meant that the relatively large electorate of the time – around a fifth of adult males – was asked to adjudicate far less frequently than had been the norm since the disruption of the Exclusion Crisis of 1679 and the Revolution of 1689.

This electorate turned to petitioning as an alternative tool of representation. Just as the Cavalier Parliament, first elected in 1661 but still sitting in 1679, drew public criticism that it no longer ‘represent[ed] the true present state of England’ and instead a different people, ‘many of them dead’ or whose ‘opinions might have changed’, the same unrepresentative claims were levelled against many 18th-century parliaments. Critics of lengthy parliaments argued that such governments had to understand the ‘fresh sense of the nation’. This would mean that decisions of government would have a greater weight and become easier to implement.

Rather than this being a century dominated by the aristocracy and oligarchy, more than 12,000 collective petitions were presented to Westminster from 1688 to 1788. Some of these were part of hugely successful campaigns – the 212 presented by silk and woollen workers in 1719, for example, caused an act to be passed two years later that banned the import of competing Indian calicoes.

Second, these petitions engaged with people in ways different from the vote and helped to delay electoral reform until the 1832 Reform Acts. In a ‘safe’ or uncontested seat, there were few possibilities to engage with MPs. But petitioning created political engagement in areas where it was otherwise weak: the county of Devon went to the polls only twice from 1690 to 1800, but sent in nearly 750 petitions in the same period. Petitions also brought in new publics otherwise excluded from political life: 10 per cent of the Welsh adults who signed the petition of 1689 made only marks, suggesting that they were illiterate, while 10 or 20 per cent who signed some petitions on poor relief and cloth in the 1690s were female, excluded from voting but not petitioning.

Third, and perhaps most important, was that petitioning created a sense that public opinion mattered. Even if they did not achieve their intended aim, petitioners forced parliamentarians to respond to their arguments. To reject or to overlook these petitions would, as 18th-century peers put it, ‘deprive the legislature of proper lights, which they might otherwise [have] received’. As the author of the 1734 pamphlet, The right of British subjects to petition, put it: ‘Without knowledge of the particulars, [an MP] may with all his brightness invent very good things for utopia, but not for Britain.’ In the age before opinion polls, government statistics and universal suffrage exercised in frequently held elections, petitioning was the only means by which parliamentarians could begin to understand what the nation thought and what steps were necessary to generate consent.

Philip Loft is a British Academy Postdoctoral Fellow at the University of Cambridge, researching the history of early modern British petitioning.