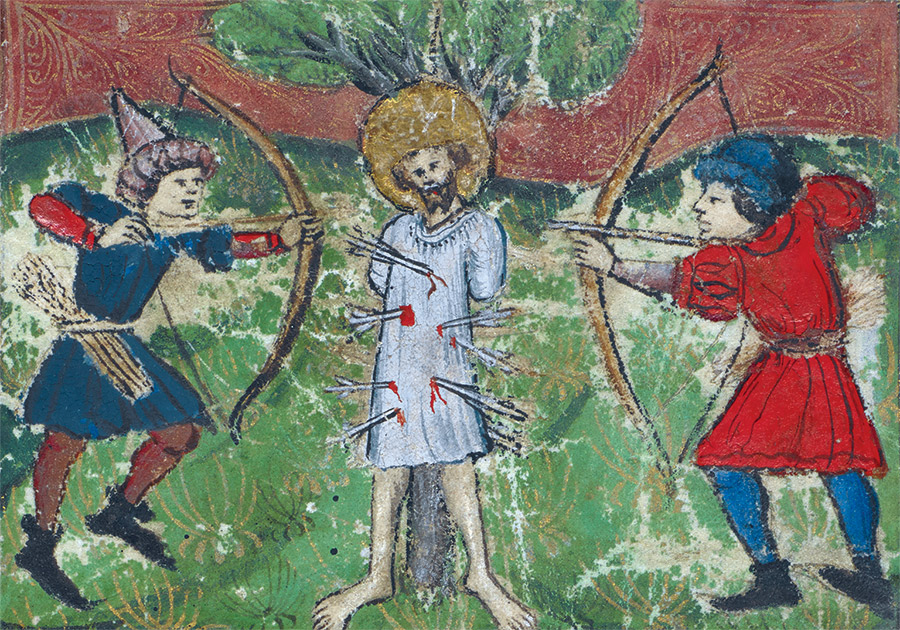 A Viking army invaded the Anglo-Saxon kingdom of East Anglia in 869 and killed its king, Edmund. The murdered monarch would be venerated as one of the great saints of medieval England, but his cult began in Danish East Anglia and was promoted by the people who killed him.

The development of Edmund’s cult in the Danish kingdom of East Anglia (which existed between 869 and 917) undermines the stereotype of Edmund as a symbol of Anglo-Saxon resistance to Viking invaders. The enthusiasm with which the Vikings embraced the figure of Edmund suggests that his commemoration became a way of forging a common Anglo-Danish identity for the people of eastern England – an identity that would become increasingly important as Danish kings dominated England in the 11th century.

The invasion of the Viking ‘Great Army’ in 865 is one of the watersheds of early medieval English history and archaeology, because (in eastern England, at least) it marks a hiatus in the development of Christianity. According to the dominant account, the invading Vikings destroyed churches and monasteries before defeating Edmund in battle. Tied to a tree and shot full of arrows, Edmund was then beheaded when he refused to rule as a Viking underking. The invasion seems to have wiped out organised religion in eastern England for nearly a century, until Archbishop Dunstan, with the support of King Edgar the Peaceable, began refounding the great monasteries of the East Midlands and East Anglia. The archaeological evidence from early East Anglian monastic sites seems to support this theory of interruption, but the development of Edmund’s cult took place at precisely the time when organised Christianity in the region was at its lowest ebb.

Historians have sometimes portrayed Edmund as a less successful version of Alfred the Great: an English king who tried and failed to withstand the Vikings. Yet, in death, he somehow became a symbol of English resistance to Viking domination. If this were true, however, we should expect far more evidence of interest in Edmund from the ninth-century kingdom of Wessex, which led the fight against the Vikings. But there is scant evidence for such attention, beyond brief notices of Edmund’s death in West Saxon sources. Instead, the evidence for the early development of a martyr-cult around Edmund comes from Viking-dominated East Anglia.

In around 890, just 20 years after Edmund’s death, moneyers working for East Anglia’s Viking kings began producing replicas of pennies minted in Edmund’s own reign, bearing the legend ‘O Saint Edmund the King!’. These ‘St Edmund memorial pennies’ were minted in large quantities and circulated as far north as York. Writing in around 985, Edmund’s earliest biographer, Abbo of Fleury, described a small wooden chapel built over the site of Edmund’s martyrdom in a forest called Hæglisdun shortly after the saint’s death. So popular was the chapel that, a few years later, Edmund’s body was exhumed and taken to the nearby town of Beodricesworth (now Bury St Edmunds). Historians hitherto assumed that these events could not have taken place before 917, when the Danish kingdom of East Anglia capitulated to Edward the Elder – simply because Edmund was an ‘English’ saint, whose devotees were oppressed Anglo-Saxons. The appearance of the word sancte (‘saint’) on the memorial coinage, however, tells us that Edmund was already venerated as a saint by 890 and, according to Abbo, it was at the moment of his translation (removal from a grave to a shrine) that Edmund was pronounced a saint. It is therefore just as likely that Edmund’s body was translated to Beodericsworth in the 890s.

In 2014 a metal detectorist made a discovery in a field in the Suffolk village of Drinkstone: a tiny and immensely rare ninth-century ‘æstel’ (a golden handle for a pointer used to read books). The find strongly suggested the proximity of a pre-Viking monastic site, but there is none in the vicinity. The æstel was found, however, in an area identified as a possible site for Hæglisdun wood. Clearly, no definite link can be drawn between the æstel and Edmund’s early cult, but the æstel looks tantalisingly like the sort of object that might have been used at Edmund’s woodland chapel. Edmund’s early cult offers a glimpse of an unorganised ‘folk Christianity’ that survived the Viking destruction of the 860s.

The widespread veneration of Edmund in medieval Scandinavia provides further indirect evidence for his importance to the Danes in England. One 12th-century Icelandic chronicler dated the entire history of his nation from the death of Edmund. Icelanders wanted to trace their ancestry to Ragnar Lothbrok, whose son, Ivarr the Boneless, killed Edmund. In so doing, Ivarr created a martyr and therefore, although a pagan, Ivarr added the lustre of Edmund’s memory to the house of Ragnar. Furthermore, a later Danish king of England, Cnut, consciously associated himself with Edmund, installing Benedictine monks at Bury St Edmunds and founding a new shrine church in 1032.

In the Middle Ages Edmund was often considered the quintessentially English saint. Yet there is more evidence for his popularity among Scandinavians than for his alleged status as a symbol of English resistance. Edmund was a focus of unity for ninth-century Anglo-Saxons and Danes, just as he would become for 11th-century English and the Normans. Edmund did not represent unadulterated ‘Englishness’; rather, he was the symbol of a composite Anglo-Danish identity in eastern England and his remarkable cult laid the foundations for the ethnically complex national identity that is characteristic of England to this day.

Francis Young is the author of Edmund: In Search of England’s Lost King (I.B. Tauris, 2018).