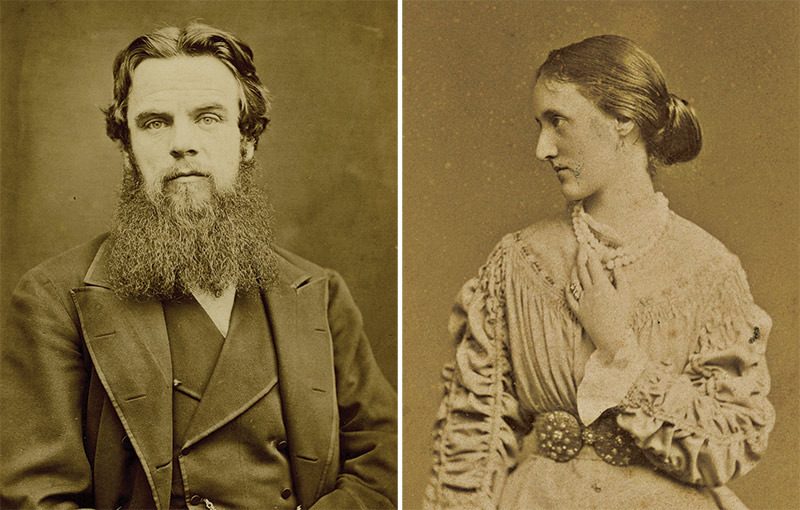 In October 1875, the Pre-Raphaelite painter William Holman Hunt asked the popular novelist Mrs Craik to chaperone his fiancée, Edith Waugh, to Switzerland for their impending nuptials. The groom was 48, the bride 27, both were upstanding citizens; why would they need to flee to the Continent to be married? The answer was that Hunt had been married to Edith’s sister, Fanny, who had died almost ten years earlier.

The proposed marriage was illegal in England under the Marriage Act of 1835, which had the support of the established Anglican church. It prohibited a widower from marrying his wife’s sister on the grounds of a passage in Leviticus, which suggested that such a relationship was incestuous (the same biblical extract Henry VIII had used to cast doubt on his marriage to Catherine of Aragon). If husband and wife were made one flesh upon marriage, then sleeping with your sister-in-law was incestuous, or so the reasoning went. The statute did not annul previous marriages: simply, a type of marriage that was legal in 1834 became illegal in 1835 and was to remain so throughout Victoria’s reign.

The law came up for repeal in Parliament in 1856, 1858, 1859, 1870 and 1871 and a decades-long controversy was fuelled by endless pamphlets and speeches. Matthew Arnold found marriage to one’s deceased wife’s sister repugnant. In Culture and Anarchy (1869) he wrote that the man who sought to ignore the law sacrificed ‘for the satisfaction of his ordinary self, his spiritual and intellectual life and liberty’. In the US, however, the eminent lawyer Joseph Story claimed that these unions between in-laws were ‘the very best sort of marriages’ and that nothing was more common in America. On the whole, public opinion supported these marriages, which were legal in the US, in Europe and even accepted by non-Anglicans in England.

Those who fought for repeal pointed out that it was natural that a woman might help her sister’s widower bring up any children and that marriage was likely to ensue from such arrangements. In fact, marriage would make the fact of a young woman living with a widower more respectable, while an aunt was likely to be an ideal, loving stepmother. The law, reformers argued, was most harmful to the poor, as a working-class widower who could not afford a servant was likely to have his sister-in-law help with the children. Unlike the Hunts, working-class couples could not afford to go to the Continent to marry, but could, and did, go to London or a parish where their story was unknown and perjure themselves in order to be wed.

Mrs Craik was a particularly good candidate to chaperone a young woman to such a controversial marriage. Not only did she have a spotless reputation herself as the author of novels suitable for the whole family to read (such as John Halifax, Gentleman in 1856), but she had also written a didactic novel, Hannah (1871), about the bill four years earlier, the last time it had come up in Parliament. Craik was attuned to the political urgency of her subject and hoped her novel would make help sway popular opinion. She pleaded with her publisher, Hurst and Blackett, to publish the novel by May to catch the session in Parliament. She thought the reformers had a chance: ‘I was told last night by the solicitor to the Society for promoting the bill that they mean this session to make a great struggle – as Gladstone, Bright the Archbishop – & Bishop Temple – are all on their side.’ The statute was not repealed, but Craik’s novel was well received by the public.

The Hunts were not alone in their wish to marry. A survey of 1847, which did not include London, found more than 1,100 cases of such marriages. Some legal experts estimated that there must be 13 times as many marriages as this survey suggested and that 40,000 children resulting from such marriages could be deemed illegitimate by law.

Like many men who sought to marry their deceased wife’s sister, Hunt was not in the throes of youthful passion, but a 48-year-old widower with a young son. Hunt and Edith’s older sister, Fanny, had been married for just a week short of a year when she died of miliary fever following childbirth on 20 December 1866. The pair had been en route to the East; she died in Florence, far away from family and friends. Hunt was heartbroken and plunged himself into work. Seven years later he became engaged to her younger sister Edith.

The situation had been years in the making when Hunt wrote to Mrs Craik begging her assistance in this delicate matter. The engagement had at first been a secret, Hunt explained, because of all the trouble the pair experienced ‘from the prejudices of people who are pleased to confound morals and fashion’. He hoped that Mrs Craik would be sympathetic, having ‘full confidence’ in her ‘kind feeling’. Hunt wrote to her not only as an author but as a friend; the pair had first met when her brother Tom had studied with Hunt at the Royal Academy.

The marriage was by all accounts a success, as Craik had foreseen when she watched the couple interact with her young daughter, Dorothy, on the passage overseas: ‘He is so gentle – wonderful – wonderful – and good. She admirably practical and kind. & loves him so. They’ll do.’ Such a marriage seemed proof of the injustice of the prohibition against marrying your deceased wife’s sister. The statute was repealed in 1907, at which point the Hunts had been married for more than 30 years. Previous bills had passed the Commons but failed in the Lords. The scholar Margaret Rose Gullette suggests that, during Victoria’s reign, there were simply too many bishops in the House of Lords who stood to lose face if they backed down from their interpretation of Leviticus. By 1907, it seems, the public was ready to have the legality of marriage determined by Parliament rather than the Anglican Church.

Karen Bourrier is assistant professor of English at the University of Calgary.