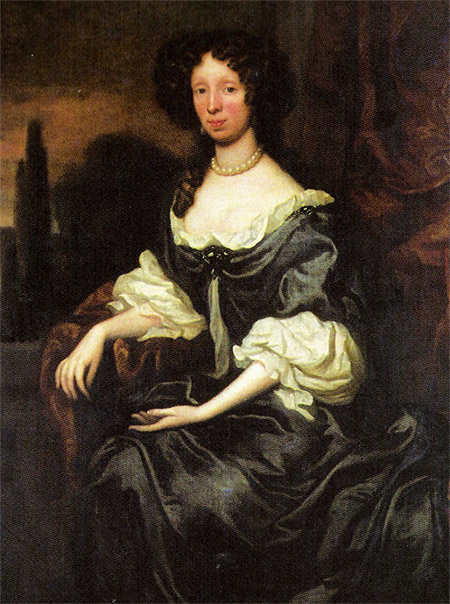 In 1921 the demolition began of the largest non-royal residence in Europe. Hamilton Palace in South Lanarkshire, built for the powerful Hamilton family in 1591, had been sold after mining subsidence was discovered. It took over a decade to demolish and only the family’s mausoleum remains. In July 1923 newspapers reported that, under a pillar along the palace’s south front, two flat stones had been unearthed. One bore the inscription ‘Funded by Anna Duches May Anno Dom 1696’.

Anne, 3rd Duchess of Hamilton, who died on October 17th, 1716, would surely have been pleased that this record of her work had been found, if saddened by the circumstances. It was an example of her record keeping and preservation, which today provides valuable information about life in a noble household.

Known locally as ‘Good Duchess Anne’ for her charitable work, she unexpectedly became head of a family whose dukes are Scotland’s most senior aristocrats. Anne was a rare example of a woman created duchess in her own right, which was not envisaged at her birth in 1632. Anne’s father, James, was 3rd Marquis of Hamilton, the title created for an ancestor’s services to Mary, Queen of Scots. Anne’s mother died when she was six and the death of several children left James with only Anne and her younger sister, Susanna.

Anne was James’ heir but it was a tricky time politically. He was chief adviser in Scottish matters to Charles I. Raised as a Presbyterian, he had some sympathy with the Scottish Covenanters and tried to act as a mediator between them and the king, but staunch Royalists became suspicious and made James’ position difficult. Feeling it imperative that the family’s interests be represented by a man, he instead appointed his brother William, Earl of Lanark as heir, knowing he would look after Anne and Susanna and ensure they married well.

When the Civil War began in 1642, James sent Anne to stay with his widowed mother at Hamilton Palace. The formidable Dowager Marchioness had efficiently managed the family’s extensive estates after her husband moved to London as Lord Steward of the Royal Household. As well as receiving academic tuition, Anne learnt estate management, including dealing with tenants, keeping accounts and supervising the chamberlains.

Charles I created a dukedom for James in 1643, making him 1st Duke of Hamilton. Defeated at Preston leading an army for the king, James was executed in 1649, shortly after Charles. His heir William became duke and made Anne his heir above his own daughters. When William was fatally wounded fighting for Charles II in 1651, Anne became Duchess of Hamilton, aged 19.

Although in theory Scotland’s greatest heiress, she was almost ruined. James and William had incurred huge debts as a result of the wars and Scotland was now part of the Commonwealth, which frequently punished supporters of the Stuarts. The Hamilton lands were forfeited and fines payable.

Anne was also responsible for Susanna and their cousins, their grandmother having died in 1647. Living in a barn near Hamilton Palace, she refused to be defeated. Her marriage in 1656 to William Douglas, Earl of Selkirk, was a successful partnership: they raised money for the fines, selling Hamilton possessions, until they could reclaim the palace; and Charles II granted Anne’s request to make William 3rd Duke of Hamilton. Looking to the future as head of the family, she ensured their descendants would take the title from her. When the king repaid Anne monies his father had owed hers, they could make the awkwardly designed, cramped palace into a home and a fine house for future generations.

Anne put her grandmother’s lessons into practice, making or preserving records of every aspect of the palace’s life and, in so doing, producing a remarkable legacy of the work involved in running such a home.

They employed between 30 and 50 servants, mostly men, arranged hierarchically, with a secretary and a lawyer at the top. The few female staff included Anne’s ladies and nursery staff for their 13 children. The accounts show the couple’s desire to be modern, buying silver candlesticks ‘of the new fashion’ and the latest style of drinking glasses. Furniture came from London, Scotland and sometimes Holland. Artwork was recorded and room inventories made. By 1681 the drawing room included ‘3 pictures, a fir table with a red damask cover, a dozen of cane chairs’, while Susanna’s room included ‘4 pieces of arras hangings’ and ‘a single Scots blanket and a single English one’. Anne liked new inventions and the notable purchase of an early mangle is recorded in 1691.

Improvements started with William’s extension of the gardens. In 1684 they began a major scheme of work called their ‘Great Design’. Retaining the palace’s north front, they demolished three other sides and built two new wings, so it now faced south towards Edinburgh. Records were kept of workmen and costs; although they used experts, the couple studied architecture and played a leading part in the planning.

After the deaths of both William and Susanna in 1694, Anne continued the work on the interior. Particularly magnificent was the oak panelling in the drawing room, transformed by master carver William Morgan into elaborate works of art. The new palace was finished around 1701. Daniel Defoe was so impressed by it that five years later he wrote: ‘The front is very magnificent indeed ... the apartments are very noble ... every thing is exquisitely fine.’ Anne continued landscaping the palace’s grounds until her death, aged 84, having outlived seven of her children.

A leading opponent of a union with England, on the basis that it would not resolve Scotland’s economic problems, Anne combined her work in developing local industry with overseeing other Hamilton properties.

Her drawing room can be enjoyed today. After being sold to the American press tycoon William Randolph Hearst before the demolition, it has returned to Scotland, where part of it is now on display in the National Museum in Edinburgh. It is a fitting tribute to Anne, 300 years after her death.