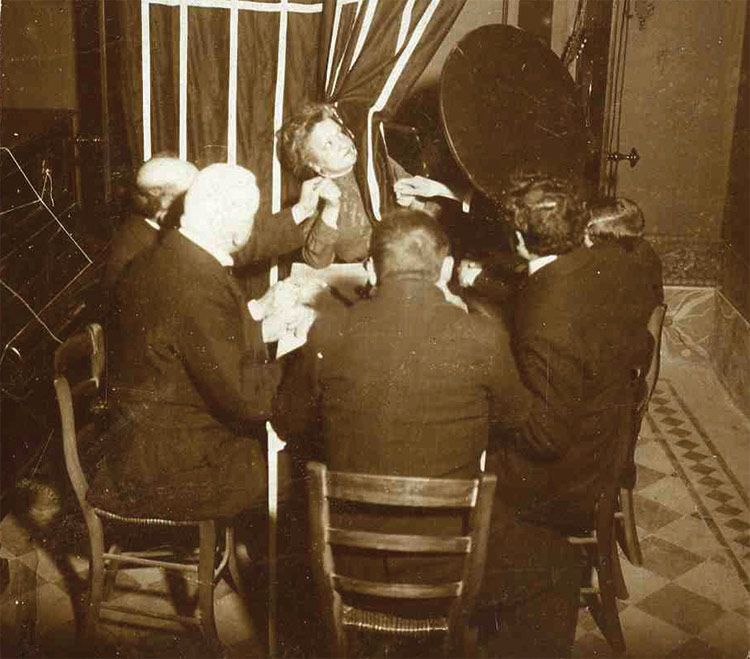 On November 14th, 1909, journalists of several New York papers, including the New York Times, gathered at the Lincoln Square Theater to attend a rather unusual press conference for the arrival of the Italian spiritualist medium Eusapia Palladino on American soil. Before an audience of newspapermen and theatrical impresarios, the medium gave a demonstration of her seance phenomena on the stage. Local celebrities added to the sensational event: the Broadway actress Grace George and her husband, William A. Brady, also a theatre actor, sat around the seance table together with Palladino, her manager and three journalists.

While it might seem puzzling that such prominence was given to a medium, Palladino was at the time an international celebrity. Like a theatrical star, she had toured numerous countries, performing seances in Italy, France, England, Poland, Russia and Germany. She had gained the attention of eminent personalities – including the world-famous Italian psychiatrist Cesare Lombroso and the Nobel Prize laureates Marie and Pierre Curie – and was a constant source of interest for the popular press.

In the months following her demonstration with the press, Eusapia Palladino gave seances in different cities along the Eastern coast. Influential scientists participated in heated debates about her alleged powers, and the press competed to report stories of her successes and accusations of trickery. William James, considered the founder of American psychology and one of the leading thinkers of his time, agreed to publish a cautious endorsement in the Cosmopolitan, where he stated that her phenomena ‘probably are genuine’, and that, if proven true, they may ‘break the bounds which science has hitherto set to nature’s forces’.

More sceptical was James’ former protégé, German-born psychologist Hugo Münsterberg, the director of the psychological laboratory at Harvard University. At a seance conducted by Palladino in Boston in January 1910, Münsterberg brought with him a collaborator, whose relationship with him was concealed. During the sitting, while Münsterberg distracted the medium, his accomplice succeeded in catching Palladino’s foot in his hands as she was trying, with a contortionist move, to lift the seance table. Palladino reacted with a scream as, at last, her glory was shattered. As Münsterberg wrote in his report of the events published in the Metropolitan Magazine, ‘her greatest wonders are absolutely nothing but fraud and humbug; this is no longer a theory but a proven fact’.

The scene repeated almost verbatim a few months later, as Dickinson Miller, a professor of philosophy at Columbia University, convinced Palladino to conduct a series of seances in his New York apartment. The invitation was, in reality, nothing but a trap. Miller set up an investigation committee that included several professors and lecturers of Columbia, as well as three stage magicians, James L. Kellogg, John W. Sargent and Joseph F. Rinn, who had specialised in exposés of spiritualist mediums. At the beginning of the seance, Miller asked to test Palladino’s powers through an electroscope, a device with which she was already familiar. However, this was only a diversion to distract Palladino while Joseph Rinn and an accomplice hid themselves under the seance table. During the séance, the sitters made efforts to appear friendly and sympathetic toward the medium in the hope that she would feel more comfortable and less vigilant. When the table started to move, Rinn and Pyne could observe how she was using her feet to produce the alleged ‘spirit phenomena’. As she realised she was being framed, the medium reportedly lost control and ‘in very rapid Italian, yelled so loud that the noise was heard in the street’.

Reports of the exposures appeared in the main newspapers and magazines, dealing a terminal blow to Palladino’s reputation in the United States. In a public letter, her manager Hereward Carrington confessed that she had cheated, only to claim that this did not prove anything, as ‘Eusapia herself says that she will cheat if allowed to, and begs her sitters to prevent her from cheating.’ Carrington’s demand for a new series of tests, however, went unheard and the medium quietly returned to Europe.

At the end of Palladino’s stay, the psychologist James H. Hyslop published a perceptive article in the Journal of the American Society for Psychical Research, where he reflected on the dynamics of the tour. He observed that its scientific significance was jeopardised by the ‘vaudeville methods’ that Palladino and her manager had adopted from the very beginning. The medium had never really entered the scientific laboratory; she had instead appealed to the judgment of the public and the popular press. What was interesting, Hyslop noted, was that the men of science had followed Palladino through this path. In testing her seance phenomena, Münsterberg and the other scientists adopted the same behaviour of which they accused Palladino, wriggling under the table like ordinary cheaters. They participated in the controversy by writing and giving interviews in the same papers that Carrington and Palladino published their claims. They were apparently oblivious of the fact that ‘the publisher’s interest is in selling his goods’, rather than ascertaining the truth. Ultimately, the scientists had joined the medium in appealing to the verdict of the public rather than to the authority of science. In this sense, Palladino’s tour was an occasion for the booming American society to challenge and redefine the borders and the mutual relations between scientific authority and the public sphere.

Simone Natale is the author of Supernatural Entertainments: Victorian Spiritualism and the Rise of Modern Media Culture (Penn State, 2016).