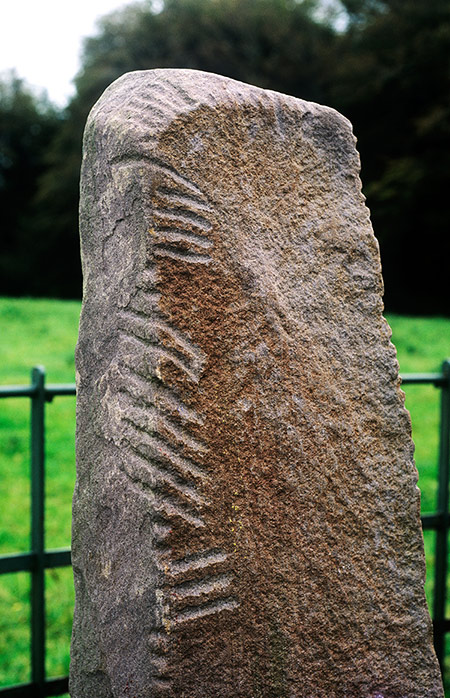 On a hill above Ballycrovane harbour stands a tall, thin pinnacle of stone, standing over four metres high and clearly visible from the bay, as one sails from the open Atlantic into the safe haven located close to the Cork and Kerry border. Carved up the left-hand side is a dedication to an Irishman: MAQQI DECCEDDAS AVI TURANIAS, ‘belonging to Mac Deichet Uí Thorna’. The final two words identify this man as a descendant of Torna, which is possibly a reference to a long-gone local dynasty; the name is also found on four other stones in Kerry and Kildare and appears in later Irish genealogies. Early Irish law indicates that stones like this could be called upon to underpin a legal claim to land, while saga writers tell of long-dead heroes who, having fallen in battle, were buried beneath stones bearing their name. The archaeologist R.A.S. Macalister argued that this stone was originally erected as a prehistoric standing stone and that the inscription was added later – probably in the fifth century – after the invention of a form of writing known as ogham, created specifically to represent the Gaelic language.

Dating ogham is difficult and often problematic: although the alphabet itself was created rather earlier, the evidence suggests that the surviving inscriptions of ogham in Ireland belong predominantly to the fifth and sixth centuries. The original form of ogham represented approximately 80 sounds from Gaelic, with 20 symbols arranged in four groups of five. Each group, or aicme, was made up of single strokes, easily carved in wood or stone, with each letter represented by one, two, three, four or five strokes and grouped in sequences of one to five located to the left, right, diagonally across or in the middle of a central stem-line (one stroke to the right is a ‘b’, two strokes is ‘l’, three strokes ‘v/f’, and so on).

Ogham was developed during the Roman Empire and demonstrates the spread of its influence far beyond the imperial frontiers; the fact that ogham has five vowel symbols (although Gaelic has ten such sounds) is one of the reasons scholars believe that the Latin alphabet, which also uses five vowels, was an influence on the invention of the system. Ogham was not a single, fixed system and the surviving stones show modifications, as new symbols were invented and older ones were lost. A few stones also show Christian influence, bearing carved crosses and the Primitive Irish word KOI, which is thought to be a translation of the Christian Latin burial formula hic iacit or ‘here lies’.

Ogham inscriptions are also found in Britain, largely in areas of post-Roman Irish colonisation in Wales, Cornwall, the Isle of Man and Scotland, but archaeologists have excavated examples from Roman Silchester and Orkney. Where the alphabet is used to write non-Gaelic languages, new symbols were invented, old ones were adapted or particular symbols were doubled in order to represent different sounds. In Shetland, ogham has been found representing Norse words such as dattur (daughter) and krosk (cross) and, in Killaloe, Co. Clare, a particularly fascinating stone has a commemoration from c.1100 dedicated to a Scandinavian settler, Torgrim, which is written in Norse runes and then replicated in ogham.

The longevity and creativity of the ogham alphabet in our surviving inscriptions is matched by its role in Gaelic language education. As with runes, each ogham symbol has a name: the letter ‘b’ is called beithe, ‘birch’ and the letter ‘c’ is coll, ‘hazel’. Bardic students learnt these basic names and used the ogham aicme sequences to create lists for memorisation. For example, the first aicme reads ‘b, l, v/f, s, n’, so a list for Énogam (bird ogham) reads: besan (pheasant), lachu (duck), faelinn (gull), seg (hawk) and naescu (snipe). Geographical and cultural facts were grouped similarly, so, for example, Linnogam (Pool ogham) lists the major inland harbours Berba (Barrow), Luimnech (Limerick), and Febal (Foyle); and Ceallogam, the church ogham, lists churches: Beanchar (Bangor), Liath, Ferna and so forth.

Other bards were influenced by Norse and Anglo-Saxon interest in cryptic runes and monastic delight in codes and ciphers. This led them to create adaptations of the ogham system designed specifically to bamboozle the reader. Nathair im ceann (snake around the head), for example, is written as a palindrome, in which the first letter of a word is placed in the centre of a sequence and the rest runs out in either direction from that central point. Ogham is also combined with sign language: adaptations of Cistercian sign language are found in Cossogam (Foot-ogham) or Sronogam (Nose-ogham), which spell out individual letters using one to five fingers arranged around the shin or on either side of the nose (one finger on the right of the nose represents ‘b’ and two represents ‘l’, while a finger laid on the nose is an ‘a’ and two fingers an ‘o’). There are even writing systems known as gall-ogam (foreign ogam) and ogam lochlannach (Norse ogam), in which runic symbols are incorporated with ogham to form new, hybrid alphabets.

These medieval experiments are discussed in Auraceipt na n-Éices, a seventh-century collection of grammarian lore known in English as the Scholar’s Primer. Many of these alphabets are also found written and drawn in the Lebor Oghaim, the Book of Oghams, in the late 14th- or early 15th-century Book of Ballymote, which is available to view on the website Irish Script on Screen, run by the Dublin Institute for Advanced Studies. The Institute is also running a project, Ogam in 3D, under Dr Nora White, which is currently spearheading international collaboration on this fascinating aspect of the history of European writing and early language analysis.

Although short-lived, ogham shows the versatility and inventiveness of its creators and reflects the variety of cultures coexisting in Britain at that time.