The medieval scriptorium was not necessarily the ordered hive of activity we have come to imagine. 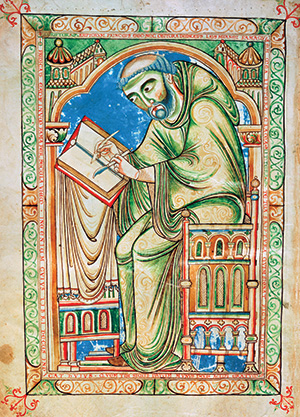 The commonly accepted idea of a medieval scriptorium is of a low dark room dedicated to the purpose of producing manuscripts, with rows of highly trained scribes hunched over desks in alcoves working in serious silence. But the reality is that, while that set-up might be true of later medieval Britain, there is little evidence to support such a picture in the Anglo-Saxon or early post-Conquest period.

Instead the term ‘scriptorium’ encompassed a variety of situations, of which no two are the same. An early medieval scriptorium could be anything from a room or building in which scribes worked, a collection of scribes with a co-ordinated, organised structure or, more loosely, a general location where manuscripts were produced. At its most basic it might amount to two scribes working together on more than one manuscript. Very often this is the most we can confidently show to have existed at any so-called scriptorium.

The closest physical evidence of a specially dedicated place in which scribes worked in this period is found in 11th-century St Albans. Here, it is recorded, Abbot Paul of Caen (1077-93) gave money for a single-room scriptorium to be built outside the monastery, above the chapter house, in which professional scribes could work without disturbing the monks and where they could earn money enough to feed them.

Close examination of the manuscripts produced in scriptoria can tell us much about the places in which they were made, as well as those who made them. Worcester Priory had a long tradition of manuscript production. The consistency, quality and quantity of manuscripts made there indicate an established training centre with a regular turnover of scribes.

The earliest cartulary (a manuscript containing land charters and documents) to survive in England, known as the Liber Wigorniensis, was produced in Worcester in the early 11th century. By compiling these documents in one manuscript the priory could ensure the organisation and preservation of its assets. The land charters contained in it are arranged in geographic sections by county, within which they move around the area in a clockwise direction. Liber Wigorniensis was written by five scribes, who worked simultaneously on a section each, working on long stretches and all following the same system of ordering.

Around 50 years later a second cartulary was produced, which was copied onto pages of Worcester’s Bible. Unusually, documentary evidence survives describing the circumstances in which this happened. In a text called Enucleatio libelli, the monk Hemming describes Bishop Wulfstan’s (1062-95) desire to preserve those of Worcester’s documents that were ‘in danger of rotting away’ and how he had ordered them to be copied to save them from ‘oblivion’. Only fragments of this cartulary remain, but in them can be seen the work of one scribe, who set the layout and wrote the red titles of each text, and two scribes who wrote the main body of the texts. Then, at some point after both the titles and the main text were written, another scribe made minor edits to the titles.

These two manuscripts point to the existence of an efficient scriptorium at Worcester, with dedicated scribes fulfilling distinct roles in co-operation with each other. Their ability to produce long sections of work suggests that they were not required to balance their scribal work with other duties.

A different kind of scriptorium emerges from studying a group of manuscripts from 12th-century Malmesbury, produced by up to 54 different scribes, including the historian and chronicler William of Malmesbury (1115-c.1140). These manuscripts were made as part of a drive by Malmesbury’s abbot, Godfrey of Jumièges (1090-1105), to produce a complete library containing all the most important texts the abbey should own. While William himself started many of the books and evidently co-ordinated their production, the bulk of the work was by an array of different scribes. The ability of these men varies. William had three assistants who stand out as being well-trained, but most of them had limited skills and were probably not dedicated scribes. They worked in short stints, sometimes writing a few pages, sometimes only a few lines, occasionally coming back later to do more. It seems likely that William called on whichever monks he could find who were capable of copying a section of text and willing to do so in between carrying out other duties, but few stuck at it for long.

The manuscripts at Salisbury present a similar picture, which has been explored by Teresa Webber from Cambridge. Following the Conquest, as part of the restructuring of the English Church, Bishop Hereman of Sherborne and Ramsbury moved his see to Old Sarum, north of the current Salisbury Cathedral. While the cathedral was still under construction, his successor Osmund (1078-99) began a drive to create a library. This resulted in the production of around 50 manuscripts within the relatively short time span of around 50 years.

As at Malmesbury, a number of scribes worked together in short time spans. In one manuscript the hands of eight different scribes can be seen working together, sometimes taking over from each other mid-sentence. These scribes were more highly trained than those at Malmesbury and seem to have been brought in from a variety of different centres to staff the new cathedral, bringing with them well developed and varying styles. This resulted in a library that is not at all uniform. One scribe has been identified as a director, whose hand can be detected starting off pages to demonstrate how they should be done and correcting the work of others, crossing out words and writing corrections between the lines. Some manuscripts also show that a monk might start to copy a manuscript but be unable to complete it, perhaps due to other duties (or possibly due to boredom), leaving the work to be completed by others.

The manuscripts show that no two scriptoria of medieval England are alike. They were formed to suit the requirements of each centre and adapted as needs changed. Scribes were used from whatever pool was most suitable to meet the demands of the community. While we know little of the physical form and location of early scriptoria, we can start to glimpse the daily life of the scribes by close study of the works they produced.

Kate Wiles researches Anglo-Saxon scribes and their writing practices. Her PhD was on the cartulary scribes of Worcester in the 11th century.