The Pope’s resignation shows that the papacy is actually in a stronger position than it has been at any other point in its history, argues Alexander Lee. 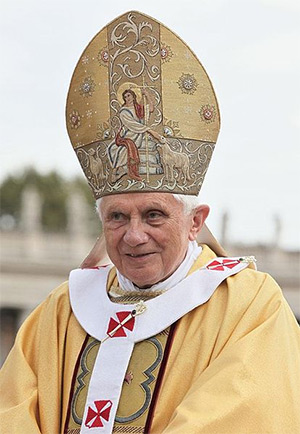 As Richard Nixon found to his cost, the manner in which any leader leaves office is always a good guide to how they themselves will be remembered by posterity. In this respect, popes are usually at an advantage. Death is, after all, the only exit that ensures that everyone will be on your side. But by resigning, Pope Benedict XVI appears to have forsaken the praise heaped upon deceased pontiffs, and to have laid his papacy bare to the harsh judgement of history.

He certainly has reason to be worried. His pontificate has been marred by allegations of sexual abuse, while his efforts at ecumenical dialogue have been undermined by bitter squabbles with other faiths. There is a very real danger that Benedict will live out his days surrounded by a hail of criticism.

But whatever the personal risks of resignation, it can also be a vital barometer of the health of the office which is being sacrificed. The manner in which power is relinquished can reveal hidden weaknesses, or expose unexpected institutional strengths. Despite Nixon’s sins, for example, the smooth hand-over of power showed that the presidency was still in good shape. And despite the criticisms that have been heaped upon him, Pope Benedict XVI’s resignation shows that the papacy is actually in a stronger position than it has been at any other point in its history.

There has certainly been no shortage of papal resignations in the past, and in every case, they have revealed not only profound inadequacies in the character of individual pontiffs, but also deep flaws in the nature of papal authority within the Church.

Historically, popes have resigned for one of two reasons. The first – which encapsulates the fatal weakness of the papacy prior to the twelfth century – is external pressure. Without any clear boundary to separate it from the secular world, and lacking any formal means of electing pontiffs, popes were totally subservient to temporal authorities, and their merits were judged not on their piety, but on their political nous. The earliest resignations showed that Roman Emperors could kick the Church around as they pleased. Pontian (r. 230-35) was forced to resign after being condemned to forced labour in the Sardinian mines, while Marcellinus (r. 296-308) appears to have been terrified into renouncing his position and his faith as a result of the Emperor Diocletian’s persecutions.

By the Middle Ages, resignations showed that the papacy – usually held by totally unsuitably lay aristocrats – had become the plaything of the Roman nobility and the Holy Roman Emperors anxious to take control of the Church’s landed power for their own ends. In 1009, for example, John XVIII is held to have resigned after having been intimidated and bullied by the Crescentii, a family of Roman aristocrats. So too, Benedict IX (who is unique in having been the only person to occupy the papacy on three separate occasions) was compelled to resign in 1045 by a terrifying alliance between Emperor Henry II and the Roman nobility.

By the mid-twelfth century, everything had changed. In 1059, Nicholas II had decreed that the cardinals alone could choose a pope, and the Investiture Contest had established the papacy as the supreme source of spiritual authority within the Church. But the second reason for papal resignations – which encapsulates the weaknesses of the period thereafter – shows that the papacy was still crippled by problems of power.

Initially, popes were ecclesiastical kings, unsupported by formal organs of government. But despite being the holiest man to occupy the papal throne since St. Peter, Celestine V (resigned 1294) revealed that this made the smooth running of papal government excessively dependent on a single, strong man. Lacking the natural authority to govern an expanding and unwieldy Church, Celestine was buffeted on all sides by forces he could not control and had no option but to resign, prompting a torrent of chaos under his excessively overbearing successor.

In an effort to resolve this problem, the College of Cardinals was given a more prominent role, and they became a sort of Church ‘cabinet’. But this only swung the pendulum the other way. Now seeing themselves as the arbiters of God’s will, the cardinals’ desperate attempts to unseat the paranoid and mentally unstable Urban VI (r. 1378-89) not only tore the Church apart, but also resulted in a bitter struggle over where supreme ecclesiastical authority actually lay. None of the Church Councils that were convened in the following years could solve the matter. That Gregory XII (r. 1406-15) – who reigned alongside two anti-popes – was forced to resign in 1415 in a last-ditch effort to sort things out only illustrates the cataclysmic instability of the institution of the papacy.

Although both Pius VII (r. 1800-23) and Pius XII (r. 1939-58) both drafted conditional resignations in the event of their being taken prisoner, Benedict XVI’s departure is the first of its kind since 1415. But the fact that the Church will proceed smoothly to elect a new pontiff during the Lenten period illustrates that the papacy is, for the first time in its history, well-supported by a smoothly-functioning Curia, and grounded in a sense of electoral authority that has finally overcome the instabilities of the past. In his characteristically humble and self-effacing manner, he has shown that the institution of the papacy is alive and kicking, and ready to face the challenges of the twenty-first century with confidence.

Alexander Lee is a Research Fellow at the universities of Luxembourg and Warwick.