The History of Council Housing

From the practical idealism of early municipal reformers to the tragedy of Grenfell Tower. 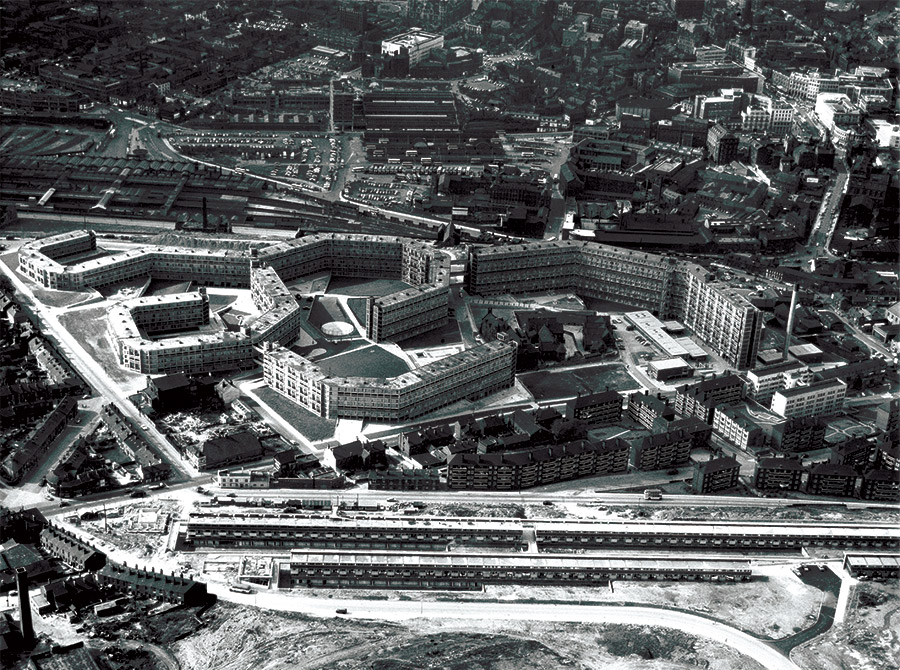 In the 1950s, the nation gathered beside the wireless to enjoy Take It From Here, the BBC Home Service comedy about Ron Glum and his fiancée Eth, suffering an interminable engagement because they were unable to find a home of their own.

In Municipal Dreams, John Boughton, who has blogged about the history of councils for years, provides an overview of the beginnings and the development of local government housing. After setting out the background, he moves briskly through a chronology of council estates. Examples include the Latchmere Estate in Battersea (opened in 1903), which was built by direct labour, with the council employing craftsmen and labourers rather than dealing with a building contractor. The Old Oak Estate in East Acton (started 1911), by contrast, used an Arts and Crafts style combined with informal planning.

Boughton confronts the twin forces of politics and money: ‘Labour retained its belief that council housing should serve general needs. For Conservatives, council housing was for those who could aspire to no better.’ An almost mythological element within the municipal dream of mass housing provision was saving money: Leeds Council adopted innovations at the massive Quarry Hill estate, ‘but the cost savings envisaged … never materialised’. Park Hill in Sheffield attempted to replicate existing social structures when moving residents out of the slums. With a resident estate sociologist, it was initially successful, but the collapse of Sheffield’s economy due to the loss of steel-making jobs in the 1980s heralded hard times.

Of the many surveys, investigations and recommendations for public housing, one that stands out is the Parker Morris Report, Homes for Today and Tomorrow (1961). The report’s generous standards were made compulsory for new towns in 1967 and universally in 1969. Against this sunlit optimism, Boughton does not neglect the corruption in the postwar decades, exemplified by the sordid tale of the Newcastle politician T. Dan Smith and architect John Poulson.

Boughton gets into his stride in the chapter called ‘Rolling back the frontiers of the state’. He reminds us that there was a cross-party consensus to sell council housing, but with the intention of reinvesting profits to build more houses. When the Thatcher government took power, it swept away these benign aims, using the money to pay down government debt. With the advent of Thatcherism came the book by Professor Alice Coleman, Utopia on Trial (1985), in which she advanced criteria to determine what made a ‘poor’ council estate.

There follows a blizzard of statistics, with examples from Carlisle to Peckham illustrating remedial government action: ‘This is where the attack on local authority housing has got us. At worst we see a crude commercialisation of public services and an assault on the ethos that sustained them. At best the current hybrid has replaced a model which could be monolithic and inefficient with something genuinely more responsive.’

Boughton focuses on a rentier class profiting from public money, pointing out that the government pay more than £9 billion in housing benefit to private landlords. Ignoring an array of socio-economic factors, politicians decided that large postwar estates were themselves the chief cause of unrest. Broughton explores the disasters wrought in Salford and Hackney by PFI contracts and makes a circumspect exploration of the Grenfell Tower tragedy and the role of the local council’s Tenant Management Organisation.

Council schemes to ease the shortage would be funny were they not pitiful: Gloucestershire estimate that rather than the 2,000 new homes per year required, they can build just 20. Southwark were hoodwinked by wily Lend Lease lawyers: hundreds of council homes were demolished for a tiny payment, with the developers providing just 74 social housing homes among 2,500 new units. Broughton’s last chapter covers the revolt against councils; sick of being decanted from their homes to make way for gentrification, tenants are fighting back. But homeless Ron Glum and long-suffering Eth are still with us.

David Brady is a freelance lecturer and writer on visual culture.