Cicero and the Power of Rhetoric

Catherine Steel traces the incredible longevity of Cicero’s great corpus of works, the study of which has helped to illuminate the intellectual and social culture of the late Roman Republic. 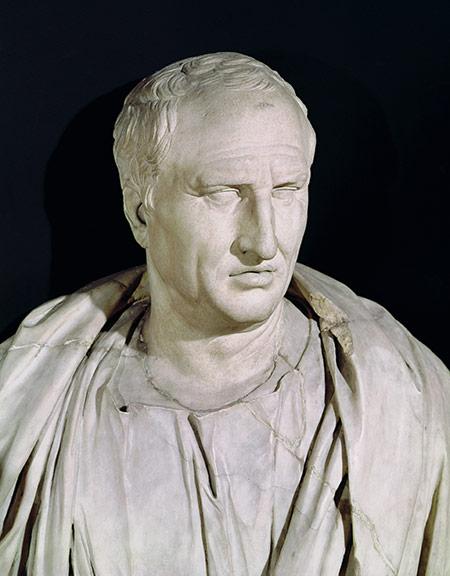 Cicero’s reputation was not high early in the 20th century, but things have changed substantially in recent years. This development has been driven less by biographical approaches than by a range of new approaches to the corpus of his writings, which have revealed their seriousness and originality and, by so doing, illuminated the intellectual and social culture of the late Roman Republic more broadly.

Cicero’s speeches kept their place on university curricula more robustly than his other writings and it is perhaps unsurprising that work on the speeches led the charge in Cicero’s re-evaluation. Ann Vasaly’s Representations: Images of the World in Ciceronian Oratory (1992) was a milestone in reading Cicero’s speeches in their social and physical contexts. Anthony Corbeill’s Controlling Laughter: Political Humour in the Late Roman Republic (1996) and Cynthia Damon’s The Mask of the Parasite: a Pathology of Roman Patronage (1997) engage extensively with Cicero’s speeches in their exploration of Roman social practices. Brian Krostenko’s Cicero, Catullus and the Language of Social Performance (2001) and Sarah Stroup’s Catullus, Cicero and a Society of Patrons: the Generation of the Text (2010) place Cicero within the intellectual context of the late Republic, with its combination of patronage, reciprocity and competition, and Jon Hall’s Cicero’s Use of Judicial Theatre (2014) explores performative aspects of his rhetoric.

Cicero’s role in creating his own biographical tradition has been a particular focus, notably in John Dugan’s Making a New Man: Ciceronian Self-fashioning in the Rhetorical Works (2005), while Ingo Gildenhard’s Creative Eloquence: the Construction of Reality in Cicero’s Speeches (2010) attempts to extract recurrent sociological and theological constructions underpinning the oratorical corpus. This work stands alongside studies focused wholly on rhetoric. Wilfried Stroh’s influential Taxis und Taktik: die advokatische Dispositionskunst in Ciceros Gerichtsreden (1975) was followed by James May’s Trials of Character: the Eloquence of Ciceronian Ethos (1988) and Christopher Craig’s analysis of Ciceronian techniques of argument in Form as Argument in Cicero’s Speeches: a Study of Dilemma (1993). Bruce Frier’s The Rise of the Roman Jurists: Studies in Cicero’s Pro Caecina (1985) examined the relationship between Cicero’s oratory and Roman legal practice. Andrew Riggsby’s Crime and Community in Ciceronian Rome (1999) extended the inquiry to criminal law, as well as reviewing the role of political factionalism in determining jury verdicts. He concluded that Roman jurors were influenced primarily by intricate questions of law. Underpinning this has been a renewed interest in the traditional commentary format, with more philologically focussed editions, such as Dominic Berry’s on Pro Sulla (1996), Andrew Dyck’s on Pro Caelio (2013) and Luca Grillo’s on De Prouinciis Consularibus (2015), now supplemented by historically driven editions (particularly in Oxford University Press’ Clarendon Ancient History series), including Robert Kaster’s Pro Sestio (2006) and by Lynn Fotheringham’s exploration of Ciceronian syntax in her edition of Pro Milone (2013).

A further impetus to the study of Cicero’s speeches has been increased interest in oratory as part of Roman political life. Fergus Millar’s The Crowd in Rome in the Late Republic (1998) argued for the importance of the Roman people in political decision-making and highlighted the role of public meetings and the speeches given there. Millar’s work has been the object of intense discussion, to which Karl-Joachim Hölkeskamp’s Reconstructing the Roman Republic (2010) is an invaluable guide; Cicero’s speeches, as the only surviving examples of political oratory from the Roman Republic, are important pieces of evidence for this debate, particularly in Robert Morstein-Marx’s Mass Oratory and Political Power in the Late Roman Republic (2004). As yet there has not been any major reassessment of Cicero’s importance as a political figure.

Cicero’s treatises have emerged decisively from a long period in which they were largely viewed as sources for lost Hellenistic philosophy. The essays by Beard and by Schofield in the 1986 edition of the Journal of Roman Studies, on De Diuinatione, and Jonathan Powell’s 1988 commentary on De Senectute were important moments in shifting perceptions in anglophone scholarship. Cicero’s originality as a philosopher has been a recurrent topic: important contributions include Matthew Fox’s Cicero’s Philosophy of History (2007).  For the links between Cicero’s treatises and his intellectual activity, there is Yelena Baraz’ A Written Republic: Cicero’s Philosophical Politics (2012). This has many points of contact with recent work on the speeches and, in general, the generic boundaries between different parts of the Ciceronian corpus are being crossed increasingly in the belief that it operates in many respects as a single entity. Cicero’s political philosophy and, in particular, his analysis of the Roman res publica at a time of crisis has been the object of particular attention. Cicero’s works play a prominent part in Dean Hammer’s Roman Political Thought: From Cicero to Augustine (2014). Jed Atkins’ Cicero on Politics and the Limits of Reason (2013) offers a sustained re-reading of Cicero’s De Re Publica and De Legibus. Joy Connolly, in The State of Speech: Rhetoric and Political Thought in Ancient Rome (2007) and The Life of Roman Republicanism (2015), puts forward a sustained argument for the relevance of Cicero’s model of debate in contemporary democracies.

Finally, Cicero’s letters, whose text was placed on a secure foundation in the editions of Shackleton Bailey from the 1960s onwards, have been explored as texts as conscious of their persuasive and autobiographical potential as any of Cicero’s other writings. Jon Hall demonstrated how they function as means of communication within the elite in Politeness and Politics in Cicero’s Letters (2009) and Sean Connell’s Philosophical Life in Cicero’s Letters (2014) draws on the upsurge of interest in Cicero’s philosophical writing to show how philosophy is embedded in his correspondence. Peter White’s Cicero in Letters: Epistolary Relations in the Late Republic (2010) is a major overview of the entire corpus, with insights into the extent to which it is the product of editorial intervention by the (post-Ciceronian) creator(s) of the different collections of letters.