The history of the Bayreuth Festival, the annual celebration of the music of Richard Wagner, is mired in controversy and scandal, as Mark Ronan reports. 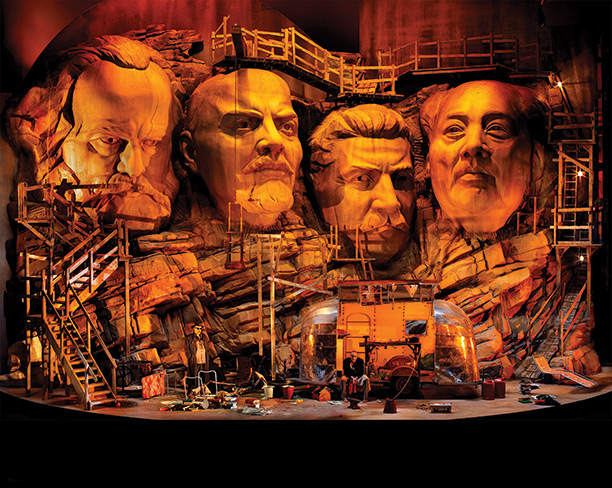 Richard Wagner's bicentenary in 2013 inspired several of the world’s major opera houses to create new productions of Der Ring des Nibelungen. Most tackle this four-part music drama, lasting in excess of 14 hours, over a period of several years, but there is one exception. Wagner’s own Festspielhaus at Bayreuth in northern Bavaria, opened in 1876 for the first ever performance of The Ring, always creates its new productions ab initio. The general consensus, this time around, was that it was a horror.

The Bayreuth Festspielhaus is a remarkable theatre, ideally suited to Wagner’s musical dramas (or Gesamtkunstwerk, meaning ‘total work of art’). He was the man who put the lights out in opera houses around the world, but in Bayreuth he went further. The orchestra pit is covered and invisible to the audience, so the absence of light allows magical things to happen on stage, and with orchestral sound bouncing off the sets and backdrop to emerge from behind the singers, the theatre’s extraordinary acoustics can give a musical experience unachievable elsewhere. Everything is all set for a director to work miracles, but before explaining why the audience met the curtain call for each opera of the 2013 production with such intense booing, let us look at the history of the Bayreuth Festival.

In 1882 Wagner’s final opera, Parsifal, was premiered there; staged performances of this Bühnenweihfestspiel (‘sacred festival drama’) were not permitted elsewhere until the rights lapsed in 1913, 30 years after the composer's death. The Metropolitan Opera in New York defied the legal niceties in 1903, but some singers who performed on that occasion were banned from ever appearing at the Festspielhaus again.

Banning singers and other musicians from Bayreuth was not unusual. After Wagner died in 1883, his widow, Cosima, daughter of Franz Liszt, ran the festival. Her strong opinions excluded certain people, including many Jews. This antisemitism stemmed from Wagner himself, though oddly enough he had chosen Hermann Levi, the son of a rabbi, to conduct the premiere of Parsifal, and Cosima went on to employ Levi as Bayreuth’s music director for almost two decades.

Wagner’s often virulent antisemitism has been the subject of endless debate. Two people who married into the Wagner family were vociferous antisemites. One was an Englishwoman, Winifred Williams, who married Wagner's bisexual son Siegfried in 1915, when she was 18 and he was 46. The other was an Englishman, Houston Stewart Chamberlain, who in 1908 married Eva, one of Cosima's daughters by her first marriage. Both moved to Germany as young adults and espoused ideas of racial supremacy. Chamberlain’s widely read books and articles, especially The Foundations of the Nineteenth Century (1899), helped to encourage the atmosphere of völkisch antisemitism that enabled the rise of Hitler, and Winifred Wagner was a member of the Nazi party from its earliest days.

Siegfried took over the running of the Bayreuth festival after his mother retired in 1907 and made a stand against racism. He declared that creed and genealogy were irrelevant and from 1925 there was a marked increase in the hiring of Jewish singers and musicians. Unfortunately Siegfried died in 1930, just a few months after his mother, and Winifred took over. During the Second World War the Festspielhaus played regular host to the Nazi elite, which assembled for performances of Hitler’s favourite composer. In a display of contrition, an array of plaques near the Festspielhaus memorialises the Jewish singers and musicians who performed there before the Second World War.

After the war Winifred was banned from Bayreuth and from 1951 her sons, Wieland and Wolfgang, revived the festival on a completely new basis.

The brothers were determined to bring new life to performances of Wagner’s operas and Wieland’s productions were brilliantly imaginative and highly acclaimed. Unfortunately he died in 1966 and Wolfgang carried on alone. Both had taken turns producing The Ring but for the centenary production in 1976 Wolfgang called in the French producer and film director Patrice Chéreau (who died in October 2013). Now considered one of the great Ring productions, it set the cycle at the time of the Industrial Revolution and saw the feud between the gods and humanity as one of class struggle. It ran for five years before being followed by new productions of varying quality.

For the 2006 production Lars von Trier pulled out and for 2013 Wim Wenders did the same. Frank Castorf stepped in but had so little time to prepare this year’s production that his huge sets, one of which, in homage to Chéreau, featured a Mount Rushmore-style structure bearing the faces of Communist dictators, could no longer be built on-site.

The sets were magnificent but Castorf’s production lacked any coherence between the four operas. His ‘big idea’ was supposed to be the transposition of Chereau’s Industrial Revolution setting to our own age of oil and the greed it inspires, though in the end the theme only became apparent intermittently. Wagner set his drama in an imaginary world of gods, heroes, and mendacious gnomes, but it is quintessentially human in its concerns with power, love and the deathless determination to create a world of impossible justice and perfection. There can be many representations of this abstraction, but presenting it on stage requires a coherent dramaturgy, entirely absent in 2013.

Despite all the controversy, the running of the Bayreuth festival, one of Germany’s great cultural events, remains a family affair, with Katarina Wagner and Eva Wagner-Pasquier, daughters of Wolfgang, contracted as festival directors until 2015. After that, who knows? The title of The Ring's final opera, Götterdämmerung, means ‘Twilight of the Gods’, and after 140 years of administration by Wagner's descendants, another twilight may be on the way.

Mark Ronan is Honorary Professor of Mathematics at UCL, and Emeritus Professor at the University of Illinois.