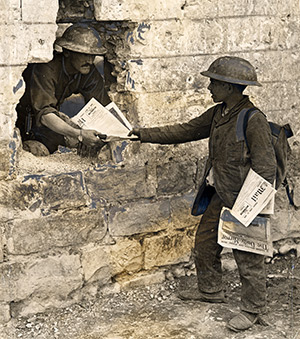 When Britain declared war on Germany in August 1914 the widespread feelings of fear, uncertainty and patriotic determination were matched at the offices of the Daily Mail by a sense of vindication. The newspaper had been warning about the German threat for years, perhaps most notoriously when it serialised in 1909 a series of inflammatory articles by the journalist Robert Blatchford, which, when reprinted as a penny pamphlet, sold some 1.6 million copies. The Mail had, moreover, consistently demanded that the Royal Navy be reinforced. It was soon styling itself ‘the paper that foretold the war’. For its critics, the Mail’s irresponsible stoking of anti-German sentiment, driven above all by the paper’s owner, Lord Northcliffe, actually helped to create the conditions that enabled conflict to break out.