Victoria Gardner looks back at earlier attitudes to Britain’s press freedom and how the withdrawal of the Licensing Act of 1662 spawned a nation of news addicts. 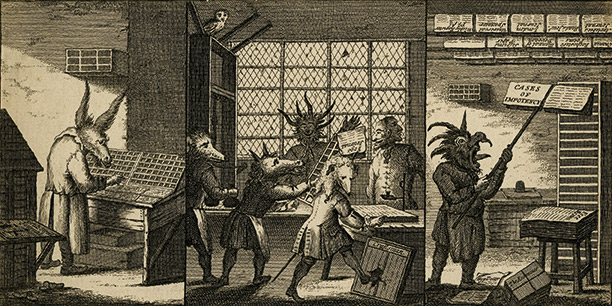 When he praised what he called the withdrawal of the Licensing Act in 1695, Thomas Babington Macaulay was somewhat mystified to discover that this momentous event that had ‘done more for civilisation than the Great Charter or Bill of Rights’ passed contemporaries by almost unnoticed. Most curious for Macaulay was that diarists including John Evelyn and Narcissus Luttrell had not marked the appearance of newspapers in their diaries. In the wake of the Leveson inquiry and criticisms of press intrusion into the lives of celebrities and others, journalists have reminded us of the significance of 1695 – the last time Britain had statutory regulation of the press. But what was the Licensing Act? Why was it removed? And how did the earliest media celebrities deal with the press?

The Licensing Act, or the ‘Act for Preventing the frequent Abuses in Printing Seditious, Treasonable and Unlicensed Books and Pamphlets; and for the Regulating of Printing and Printing Presses’ was introduced in 1662. It was not the first of its kind; since the Tudor period monarchs and parliaments had sought to contain the use of print as a dangerous vehicle for sedition. Nor was the act aimed deliberately at controlling printed news, but instead regulated the licensing, trading and production of print, which was policed by the Stationers’ Company.

The act had been designed originally as a temporary measure while a better act for controlling the press was developed. When it failed to appear, the Licensing Act was renewed in 1663 and again in 1665. In 1679, distracted by the chaos of the Popish Plot, Parliament overlooked renewal of the act and an explosion of news print ensued. Just six years later the act was reinstated and newspapers ceased, with one further renewal in 1693, but by now there were serious doubts about the Stationers’ Company’s control of the press and objections to its monopoly over lucrative areas of print. The Lords agreed to the Commons’ removal of the act on the condition of a new and improved one, but that bill failed to get through the Commons in 1697. Thereafter, press licensing was dropped. Importantly though, the government had satisfied itself that there were more effective means of controlling print. In 1693 the Jacobite printer William Anderton was tried and executed for treason, thus removing Anderton and advertising to other printers that they should print with care.

Unfortunately for Macaulay and other Whig historians, who viewed 1695 as a decisive victory for press freedom, Evelyn and Luttrell’s indifference reflected contemporaries’ wider lack of interest in the event. Printed news was nothing new, having flourished during unregulated periods throughout the 17th century and the Licensing Act had lapsed on numerous occasions before. Nevertheless, it was to transform Britain into a nation of news lovers.

In 1695 three London titles were immediately established, followed by the first provincial newspaper, either in Bristol or Norwich, by 1701. By 1712 there were about 20 papers in London and a further 15 in major provincial towns. As one paper pronounced in 1719 ‘city, town and country, are over-flowed every day with an inundation of newspapers’. By 1760 there were at least 11 London titles and 35 provincial ones and by 1800 these had doubled again. Just as the Act of Union bound the nation politically in 1707, newspapers offered readers across Britain new proximity to the capital and access to the nation at large.

The idea of the ‘liberty of the press’ had emerged by the 1740s, after which time newspapers were increasingly promoted as a public watchdog. Even so, the press has never been entirely free from statutory restraint. In 1712 the Stamp Act placed duty on newspapers and advertisements that increased five times before its reduction to 1d. in 1836. Later campaigns named this a ‘tax on knowledge’ (because the cover-price limited access to the middling sort and above), but in the 18th century it was a means of raising revenues in an age of almost continuous warfare. It also ensured that the British press was precociously commercial, dependent upon advertising rather than readership for profit.

There were other ways to control the press too, as the case of William Anderton had shown. Prosecutions could be brought successfully for treason, seditious libel and blasphemy. Prosecutions for libel had always been scattershot, but the threat of prison was enough to quieten all but the hardiest of radicals when only the fact of a libel and criminal intent had to be established. It was not until 1843 that the Libel Act was finally altered to incorporate the modern-day defence of publishing in the public interest.

The commercial basis and daily production of newspapers created an expectation for continuous news. Politics was the central feature of newspapers and from 1771 they could insert reports from Parliament, bringing about a new transparency in MPs’ activities. Interest also developed in the private lives of the ‘celebrated’, whether nobility, musicians, criminals or courtesans. As early as 1728 one writer was complaining that hacks would ‘scrape Acquaintance with the Footmen and other Servants … to learn … the Motions and Designs of their Lords and Masters … Family-Secrets are often betrayed, and matters sacred to Privacy … [are] made the Talk of the World’.

By the later 18th century press coverage was sought by celebrities. ‘Fighting’ George Fitzgerald, duellist and man of fashion, issued his own pamphlets to ensure that newspapers reported on his affairs. The famous castrato Giusto Fernando Tenducci used advertisements as an early form of press release to defend his reputation. As Helen Berry has shown, when 15-year-old Dorothea Maunsell’s father let it be known that Tenducci had kidnapped his daughter in 1766, the singer resorted to the newspapers to clear his name. Celebrities realised that they could use the press, just as it used them.

With a precarious and public profession, actresses were both targeted by and courted the press. The romance between Mary ‘Perdita’ Robinson and the Prince Regent was reported extensively during 1780. When the prince lost interest within a year, every aspect of the breakup and Mrs Robinson’s subsequent love life was eagerly followed. She described how:

The daily prints … indulged the malice of my enemies by the most scandalous paragraphs … it was now too late to stop the hourly augmenting torrent of abuse that was poured upon me… Whenever I appeared in public, I was overwhelmed by the gazing of the multitude. I was frequently obliged to quit Ranelagh, owing to the crowd which staring curiosity had assembled round my box; and, even in the streets of the metropolis I scarcely ventured to enter a shop … Many hours have I waited till the crowd dispersed which surrounded my carriage.

Despite this Perdita acknowledged that there were benefits to the intrusion: ‘I cannot suppress a smile … that, during nearly three seasons, I was almost every night upon the stage, and that I had then been near five years with Mr Robinson at every fashionable place of entertainment.’ Press attention had ensured that Perdita enjoyed the perks of a fashionable life.

In 1695 press freedom came about not with a fanfare but with a degree of indifference and the threat of other controls. The liberty of the press rapidly became a cornerstone of British democracy. That liberty has since been moulded by a range of legal mechanisms by which injured parties can seek recourse, while 21st-century editors have a historic responsibility to ensure that journalists’ actions do not place the institution in jeopardy. Those who court the press and use it for their own ends, however, have always done so at their peril. As Mrs Robinson and her contemporaries understood, fame and its trappings come at a cost.

Victoria Gardner is Lecturer in Modern British History at the University of Manchester.