As the Eurozone countries wrestle with the fate of the single currency, Mark Ronan discovers parallels in Wagner’s Ring cycle. 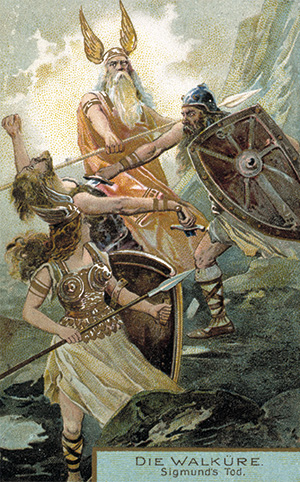 Wagner’s epic music-drama, which he began in the revolutionary year of 1848, starts with the Niebelung Alberich forging a ring of power from gold he stole from the Rhinemaidens. In the meantime the gods construct their palace of Valhalla. They don’t have the money to pay for it, so they trick Alberich out of his treasure in order to pay giants to build it. The giants demand the ring in payment: one kills the other, turns into a dragon and guards his treasure.

All might be well. The gods got something for nothing, but Wotan, their king, having paid off his debt, wants to return the ring to the Rhinemaidens. His plan is a deep one. He fathers two children, Siegmund and Sieglinde, and forges a sword that can kill the dragon. The children grow up together but are later split apart ( like West and East Germany) and Sieglinde is forcibly married to a man who doesn’t love her (like East Germany’s forced marriage to the Soviet Union). Siegmund and Sieglinde reunite, become lovers and Siegmund acquires the sword that Wotan created. Wotan’s wife, Fricka, objects, while her husband, realising Siegmund is not the free hero he thought he’d created, changes his mind. With his spear, the instrument on which all treaties are engraved, Wotan breaks the sword.

Siegmund is killed, but Brünnhilde, daughter of Wotan and the Earth goddess Erda, rescues Sieglinde who gives birth to Siegmund’s son, Siegfried. He becomes the free hero his father was supposed to be, re-forges the sword, kills the dragon and takes the ring. He then breaks Wotan’s spear, with all its treaties, and wins Brünnhilde as his wife.

Angela Merkel, Germany’s chancellor, knows the story well. A Wagner aficionado, she not only attends the opening of the annual Bayreuth Festival in her official capacity, but visits of her own accord and can surely see Wotan’s spear as a metaphor for the treaties that established the Euro. It has already cast down the sword of democracy wielded by George Papandreou of Greece. But what if someone mightier wields the sword? Merkel, as a good European, is aware of the problem and has her solution: strengthen the spear, strengthen the treaties.

This might work; then again it might not. Look at the Ring. Like modern Germany, the hero Siegfried is the son of a brother and sister and, if the Germans themselves raise the sword of democracy against the Euro treaties, what then?

After Siegfried has killed the dragon, taken the ring and broken the spear, Wotan resigns himself to the idea that his days are over and that his grandson Siegfried will inherit the earth. But it doesn’t turn out that way.

As we move into the fourth and last opera in the cycle, Götterdämmerung, the Norns, daughters of Erda, spin the rope of fate. From the past they can read the future, but other forces are at work, and the rope tightens, then breaks.

Alberich, creator of the ring, has a son Hagen intent on reclaiming it. Hagen schemes against Siegfried, and Brünnhilde, who reveals how he can kill Siegfried. The deed is done, the body with the ring is carried home on a mighty funeral procession and Brünnhilde finally realises the awful truth. She immolates herself on Siegfried’s funeral pyre and, in the resulting conflagration, not even Hagen can secure the ring. The Rhine overflows its banks and the Rhinemaidens sweep forth to take it back to its original home.

This is the end of Wagner’s Ring, but the composer offers opportunities on the way for avoiding such a dramatic meltdown. After Siegfried has given the ring to Brünnhilde as a wedding gift, one of her sisters comes begging her to return it to the Rhine, but she refuses. Pity, because one of the lessons of the Ring is: if you refuse to give it up it will be taken from you and you will die, then or later. In the first opera, Das Rheingold, one of the giants suffered this fate, in the third opera, Siegfried, it was the dragon, and in the final opera it happens to Brünnhilde. Hagen deceives Siegfried, who acquires the ring yet again, but before Hagen kills him the Rhinemaidens appear and ask for it back. He refuses. The only person who ever gave up the ring voluntarily was Wotan himself.

Can anyone give up the Euro? Does anyone have a plan to return it from whence it came without Europe falling into semi-destruction? Wotan had a plan, but changed his mind­ and his uncertainty compounded the problem.

It may seem fanciful to compare the Euro with the Ring, but great dramas hold our imaginations because they appeal to unconscious feelings and knowledge. The Euro was created from a sense of idealism, to increase the unity and prosperity of Europe. But like the ring it holds its owners in thrall and its destructive aspects could yet lead to conflagration.

Exactly how is not known, but in creating his Ring cycle, Wagner went through several different endings in the final immolation scene with Brünnhilde. The Feuerbach ending, the Schopenhauer ending … Where are the philosophers when we need them? The best laid plans, of Niebelungs and gods, can go awry, and if the rope breaks? Far better to return the Euro to its Urheimat voluntarily. Pity there’s no one who can do it.