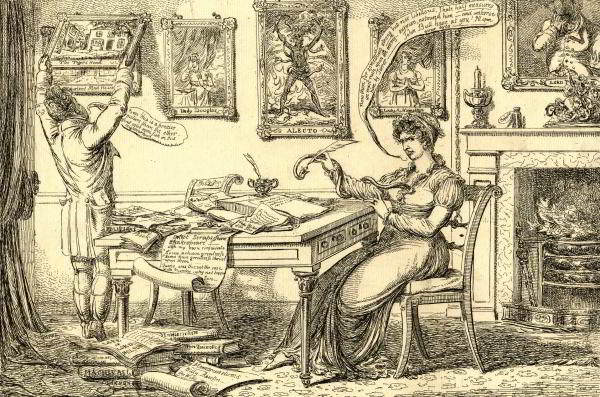 Almost two centuries ago, on the southern side of the Thames at Blackheath, the worlds of press, politics and court were drawn together by the pen of Bridget, Viscountess Perceval. She counted herself a friend of the troubled Princess Caroline, who had separated from the Prince Regent and had been installed in a rented house near Blackheath, distraught at being separated from her daughter, the Princess Charlotte. While Caroline had powerful Opposition friends, such as Lord Brougham, to make her case in Parliament, Lady Perceval sought to use the power of what was termed the ‘public mind’: appealing to the growing power and popularity of the newspaper press, resorting to methods which may bring to mind some of those deployed in modern-day Wapping.

Although elite patronage and manipulation of the press was not new, such involvement demanded contact with a shady underworld of hacks, blackmailers and other scribblers. In Lady Perceval’s case, it also brought the genteel, and feminine, world of the drawing room into contact with a male arena.

According to Lady Anne Hamilton, the viscountess had taken an interest in the same school to which the editor of the Pilot sent his two girls and recommended a cure when they caught whooping cough, ‘winning the Pilot’s heart’. In 1812 the paper offered her ‘steady and warmest support in the laudable and natural struggle which engages the Princess of Wales.’ Lady Perceval was soon placing letters in the paper on, she believed, Caroline’s behalf. The publication of the ‘Regent’s Valentine’, a spurned appeal to the prince by Caroline asking for ‘the society of my child’, on February 10th, 1813 was the explosive opening barrage in the press war between the prince and his Tory supporters and the princess and the Whig opposition. A flurry of leaked or forged letters ensued, including the news that the prince was planning a second ‘Delicate Investigation’ into the princess’s marital fidelity.

The placing of the letters in the press required the services of intermediaries, including ‘Captain’ Thomas Ashe, the author of the somewhat fraudulent Travels in America, and John Mitford, a distant cousin of Lady Perceval. Tempted by the offer of a civil service job, Mitford delivered a series of notes to newspaper editors, putting forward the princess’s case. The viscountess had procured a medical certificate, releasing him from naval service and placed him in a Hoxton asylum, in order, Mitford recalled, to ‘remove suspicion from the parties at Blackheath, where they were watched’. He was not detained, but could visit editors and also hire ‘vagabonds to hoot the Regent whenever he appeared in any place of public amusements’ and ‘thereby convince him that the people were decidedly against his conduct’.

The campaign quickly unravelled. The prince’s party threatened the viscountess’s middlemen. One note read: ‘We can do you a great deal of good and a great deal of harm’. Crucially, they succeeded in turning the editor of the News, who revealed Lady Perceval’s role. She and her husband sued for libel, believing that Mitford could not be called as a witness from the asylum. Nonetheless the judge summoned him, Perceval lost the case and was pilloried in the press as ‘Lady P Aragraph’. Caroline dropped her and left for the Continent.

As the historian Hannah Barker notes, the view that the Georgian and Regency press was ‘rendered impotent by political corruption and manipulation’ is in need of substantial revision, since growing circulation and revenues gave papers greater editorial independence. The Blackheath Affair shows both sides of this equation. Ashe (who sold his memoirs after attempting to blackmail Lady Perceval) and Mitford continued to make money from the contacts and information they had gathered, while the circulation of the papers, such as the News, rose by as much as a third. Scandal sells.

Matthew Shaw is a curator at the British Library.