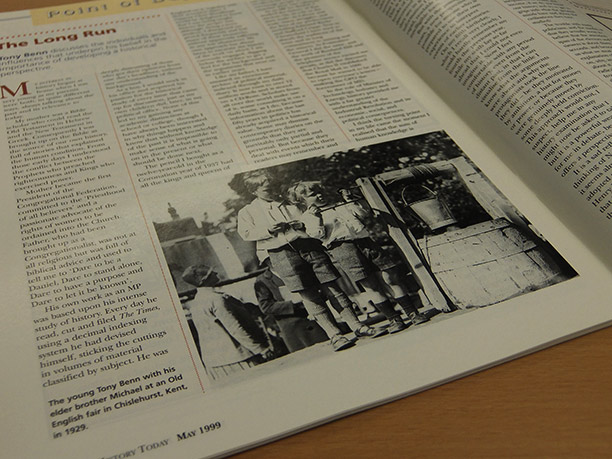 Tony Benn’s death at the age of 88 was announced this morning. Others can pay tribute or cast doubt on the achievements of a long and contentious political career. I want to consider his place in England’s radical tradition and his understanding of it. Benn engaged deeply with the past – he contributed to History Today and was a fixture of the commemorations held since 1975 at the Cotswold town of Burford, the site of Cromwell’s ruthless assault on the Leveller movement, which sought universal male suffrage, executing ringleaders Cornet Thompson, Corporal Perkins and Private Church on May 17th, 1649.

The Levellers are almost uniformly described as radicals, but theirs is radicalism of a peculiarly English kind, in that it is also conservative and nostalgic. Most of the world’s radical or revolutionary movements take their cue from the post 1789 world and the attempt to create a world anew, a year zero. The English radical tradition born of the Civil Wars does not. It appeals to the ‘Ancient Constitution’, ‘time out of mind’, the Common Law, precedent, Parliament, the individual. All of the innovations of the 1630s are those of Charles I and his circle, who wished to create a polity modelled on the new fangled absolute monarchies of the Continent, of France and Spain in particular. The Levellers, by contrast, as well as the more moderate parliamentarians, sought to preserve, to conserve the rights of ‘free born Englishmen’, harking back to a mythology rooted in a pre-Conquest idyll, before the imposition of the ’Norman Yoke'. It was the reason why Cromwell, ultimately, was offered the Crown. The ancient constitution set out the parameters with which to control a king; there were no such controls on a Lord Protector, a title and position, fatally, without precedent.

This elision between right and left, conservative and radical, Tory and Whig, is peculiarly English. Benn, as well as his near contemporary and fellow Labour MP Michael Foot, would invoke the Levellers and the Civil Wars – Foot’s father Isaac founded the Cromwell Association, while Benn’s family shared roots in the Liberal radical tradition – yet Foot also embraced the radical Toryism of Jonathan Swift and Benn found a parliamentary ally in Enoch Powell; all three shared a profound mistrust of the European Union.

New Labour rarely invokes the past – indeed Tony Blair, in the most fatuous of all his utterings, denied it, declaring Britain a ‘young country’ – and, with a few exceptions, such as John Cruddas and Frank Field, it is a party abandoned to managerialism and materialism. Indeed, though the modern Conservative party is similarly stricken with amnesia, some of its more radical figures, such as Douglas Carswell and the MEP Daniel Hannan are more likely to call on the Leveller tradition than are most Labour or Liberal MPs, though whether the Levellers would really consider themselves ‘libertarians’, as Hannan claims, is a moot point.

Ultimately, what both sides have been committed to is parliamentary democracy and Tony Benn, despite some of the dubious company he sometimes kept, was a parliamentarian to his boots. At a time when Parliament and politicians are held in contempt, it is time for both left and right to rediscover and engage with their past and bring Parliament to the fore again. Only then will politicians of all sides reconnect with a disaffected public and bring new vigour, born of the old, to public debate.

Philip Baker considers the lasting impact of the Levellers’ famous efforts to reform the English state in the aftermath of the Civil Wars.