9/11 is remembered as one of the most devastating terrorist attacks of all time. But terrorism has a long history and its meaning today is quite different from the original eighteenth-century definition. 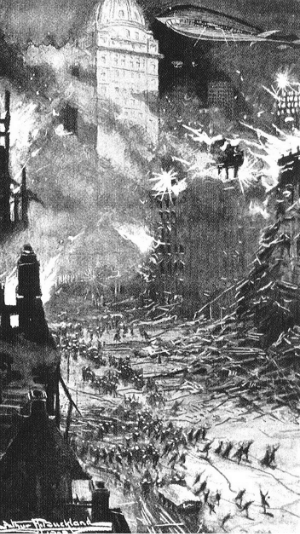 9/11 remains a date which lives in infamy. The elapsing of 10 years this weekend has done nothing to diminish the event’s notoriety in the eyes of the world, nor its ramifications for American foreign policy. And yet, whilst in many peoples’ minds 9/11 encapsulates the very definition of terror, history has taught us that the phenomenon of terrorism has undertaken many guises since its inception.

The word ‘terrorism’ first emerged at the end of the eighteenth century in post-revolutionary France when it was used by the Dictionnaire de l’Académie française to describe ‘a regime of terror’. Ironically given its usage today, the term originally referred to a legitimate system of government which used terror to assert itself. Its inspiration was the fearsome la Terreur which devoured revolutionary France under Robespierre’s doomed command between 1793 and 1794. A century later, Paris became the scene of a further development in the history of terrorism: hostage taking. In the spring of 1871 during the brief reign of the Paris Commune, the concept of hostage taking, now a commonplace attribute of current day terrorism, was born.

Somewhere along the line, however, the concept of terrorism experienced an overhaul in its definition. Nowadays it is commonly perceived as an act of aggression committed by a non-state group for the purpose of undermining a national government, with the intention of igniting terror amongst the people.

Events of the past undertook a new meaning in the light of this new definition, and England’s notorious Catholic conspirators of the Gunpowder Plot, for example, began to be viewed as some of the nation’s earliest terrorists. Religious conviction has a habit of inspiring terrorist activity. Today terrorism has repeatedly manifested itself in the form of Islamic fundamentalism; however this association is by no means recent. Islam’s first terrorists can be traced back to AD 600.

Of course, violent acts targeting a nation’s government at the expense of civilian victims have a long history, which provides some interesting parallels. For example, the 2005 London Underground bombings have their precedent in the bombings of the underground train lines in the capital by Irish-American Republicans in the early 1880s. Response to that very modern day threat, al-Qaeda, widespread public fear and governmental anti-terrorist crackdowns, also echo the world’s reaction a century ago to the 'anarchist terror' which struck both sides of the Atlantic.

The great discontinuity lies in the extent of damage the terrorist can cause today in comparison to his historical counterpart; technological developments have unwittingly but certainly expanded a terrorist’s potential. Another break with the past lies in contemporary Britain’s tough line against terrorism, in stark contrast to the lax attitude of the Victorian era, which saw the country sheltering foreign terrorists in accordance with its liberal political tradition.

Given its nature as an indefensible and unjustifiable act, terrorism’s past unsurprisingly offers little in the way of lessons for the present day. Its past is messy and the concept ultimately indefinable, a problem that stems from the subjectivity with which people perceive acts of terrorism. Today’s Jihadist is a holy man in some eyes and a murderer in others. But in all its forms, terrorism’s disregard for the sanctity of individual human life condemns it as one of mankind’s most abhorrent phenomena.

In Robespierre and the Terror Marisa Linton chronicles the life and agenda of the original ‘terrorist’.

The Paris Commune, 1871, provided the backdrop to one of the first examples of hostage taking as a weapon of terror.

Simon Adams explains in The Gunpowder Plot: Terror and Toleration how Catholic conviction in Stewart England led to one of Britain’s earliest terrorist acts.

The 2005 London Underground bombings were preceded by another terrorist attack on London’s transportation a century prior.

Matt Carr argues in Cloaks, Daggers and Dynamite that the worldwide public fear that has followed 9/11 is a repetition of the world’s response to the terrorism of anarchists a century earlier.

In Terrorism and Victorians Bernard Porter examines how Britain’s anti-terrorist policies have developed since the Victorian era.