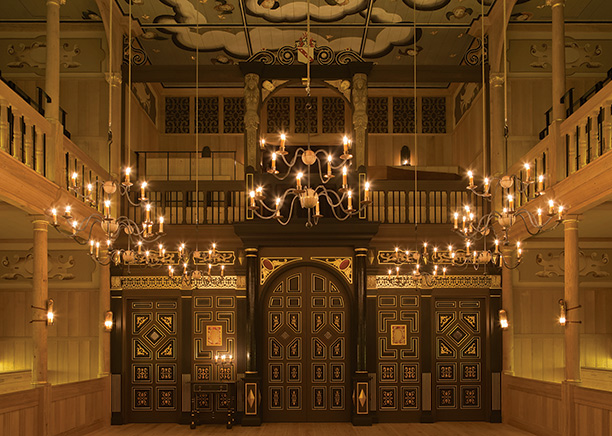 This year marks an intriguing step forward in the revival of baroque opera, which has gathered pace over the past half-century with the use of original instruments played in the style of the time. This further step is not the revival of the castrati — those castrated males whose voices carried huge power at a high vocal register — but the creation of a realistic performance space, lit entirely by candles.

Seventeenth century pieces were not performed in the vast auditoriums we have today, and putting on an opera from the Jacobean era in a modern opera house inevitably compromises the result. Over five years ago the Royal Opera at Covent Garden put on Cavalli's La Calisto, a highly colourful romp about sexual desires among gods and humans, but this year for his L'Ormindo, a sexual intrigue about two young men in love with the same queen, they have moved to a new venue specially catering to Jacobean theatre.

This is the recently opened Sam Wanamaker Theatre located within the Globe Theatre complex on London's South Bank. Wanamaker himself was instrumental in recreating the Globe, and his plans always included an indoor playhouse, now named in his honour. The original Globe was built in 1599 for Shakespeare's company, using timbers from an earlier dismembered theatre in Shoreditch, and then rebuilt in 1614 after a blaze caused by the misfiring of a stage cannon. But sadly the Puritans closed it down in 1642 and it was demolished a couple of years later. Fast forward two hundred and fifty years, and Sam Wanamaker's unstinting efforts to build a new Globe, modelled on the original and located not far from it, eventually succeeded and the new theatre opened in 1997. This Globe takes over 1500 people, including 700 in the pit round the stage, which is open to the weather. The new Sam Wanamaker Theatre by contrast is entirely enclosed and accommodates 340, seated intimately close to one another.

In the early seventeenth century operas were a private affair, often put on by courts, but in 1637 the Tron family in Venice opened the Teatro San Cassiano — where L'Ormindo had its premiere — to the opera paying public, a mere forty years after the earliest operas by Florentine composers Jacopo Peri and Giulio Caccini. Their ideas were later broadened by Claudio Monteverdi (1567–1643), whose earliest opera Orfeo, written in 1607 during his employment by the Duke of Mantua, shaped each act into a musical unit and matched dramatic climaxes with musical ones. Monteverdi's aim was to express human emotions in music, and although his use of intense and sustained dissonances inspired attacks by musical theorists, it also made him a figurehead of the avant-garde movement. In 1613, he moved to take up the directorship of music at St. Mark's in Venice, the city that later became the centre for opera in Europe, and in 1642 at the age of 75 he produced what is often thought his greatest work The Coronation of Poppea.

One of Monteverdi's pupils in Venice, Pier Francesco Caletti-Bruni (1602–76), later known as Francesco Cavalli, became the most popular opera composer in the quarter century after Monteverdi's death, with some 40 operas written between 1639 and 1669. The name Cavalli he took from his patron Federico Cavalli, Venetian governor of his home-town Crema. This gentleman persuaded the boy's father to send him to Venice, and he entered the capella of St. Mark's as a soprano in 1616. There he met Monteverdi, before leaving four years later to take up a position as a church organist, but returning later to assume the post of second organist at St. Mark's. There he produced his first opera at the Teatro San Cassiano, less than two years after it opened to paying audiences.

Appropriate then that Cavalli's work was chosen for the first opera production at the Sam Wanamaker Theatre, performed by candlelight rather than electricity, or indeed the gas lighting of the nineteenth century. With candlelight, half an opera director's box of tricks is rendered useless, which is no bad thing, but other options, such as gods appearing from above through the beautifully ornate ceiling are no problem, and even the lighting can be dimmed and raised! How so? The new theatre is equipped with six large candelabra, each with a dozen candles made of beeswax rather than the usual mix of wax and tallow, and a pulley system operated from backstage. This facilitates the appearance of gods from above, as well as the raising and lowering of candelabra, which affects the amount of light on stage. Yet one can go further with lighting, and towards the end when the lovers Ormindo and Erisbe, wife of old king Ariadenus, lie down to die after ingesting poison, performers go round extinguishing most of the candles except for two candelabra high up by the ceiling.

When all turns out well — Ariadenus discovers that Ormindo is really his own son, and the poison turns out to be merely a sleeping draught — the relighting of the candles gives a marvellous solemnity to the occasion, and the intimacy of the house helps gives us the feeling that we are almost a part of this theatrical tragi-comedy. And apart from the intimate lighting, the terrific acoustic allows the singers voices to be heard with such wonderful clarity that the absence of surtitles is a bonus.

Above the stage in true seventeenth century style, Christian Curnyn directed five string players from the orchestra of the Early Opera Company, all in costume. Excellent designs and costumes for the players by Anja Vang Kragh, and this production by Kasper Holten of the Royal Opera House, with ROH young artists playing the main roles, was a joy. The seating capacity is roughly that of the ROH Linbury Studio, but the acoustic is incomparably better. In the seventeenth century they got some things right that we fail on today, and for baroque opera this new venue is perfect.