The Real Wives of Jamestown

Those English women who travelled to the new colony of Jamestown in search of marriage and a new life were neither groomed nor coerced. The same cannot be said of their African counterparts. 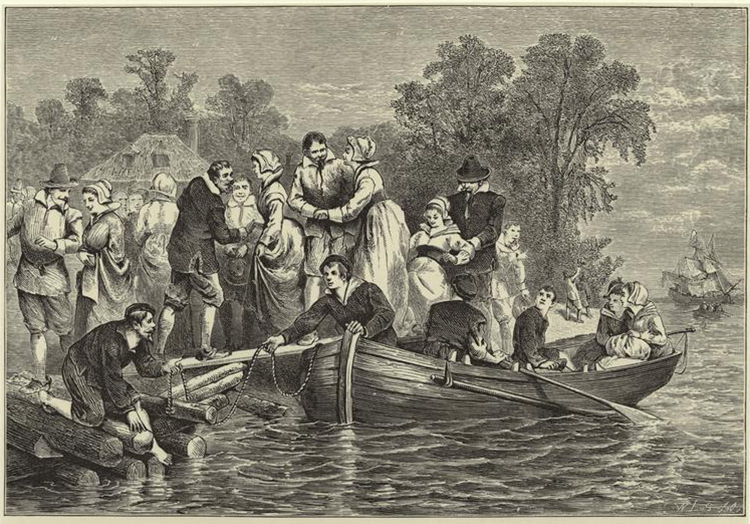 By December 1620, Anne Rickard was tired of her life in the London parish of St James Clerkenwell. For unsaid reasons, she decided to do something about it and ‘entreated and required’ her churchwardens to write a testimonial stating her good character. In this written document, they attested that she was a woman of ‘honest sort … honest life and conversation’, both ‘esteemed and reputed’ by her community. Despite her local standing, Anne, a widow, was ‘minded and purposed to dwell elsewhere’. She wanted a fresh start in Jamestown and before she voyaged Anne presented her recommendation to the Virginia Company. It was her means to the New World and a new life.

A recent article in The Guardian by Mark Lawson likened Anne Rickard and other English women to ‘forced brides’, a provocative comparison that could not be further from the truth. The real ‘Jamestown brides’ were not groomed or coerced, and, if they refused to marry, violence was not an actual and terrifying threat. Instead, their testimony shows that they were willing to voyage to the colony and took measures to ensure that they could do so. It is difficult to get at why exactly these women chose to throw in their chances with the colony but, reading between the lines, it seems that they were excited by the prospect of an adventure and were ready to start out on their own in a place that promised new opportunities, just like the men who had gone before them. Lawson’s comments are another example of women’s autonomy and agency being written out of history, but the voices of the brides who landed at Jamestown are not difficult to find.

What possessed them to uproot and plant themselves in a new country? Binding themselves through matrimony to tobacco planters in the Virginia colony was mutually beneficial. There was an economic downturn in England at the time, meaning that a lot of young men could not afford to start a family and had to put off marriage. In the colony, though, land and prosperity was apparently boundless. There, English women were guaranteed the chance to ‘settle down’ and, with the help of a servant, run their own households. At this time, young women already left their homes and families in search of new opportunities ‘abroad’: Jamestown was just that bit further. Men in the colony believed that women would make their lives more comfortable, too, by performing what they deemed to be essential female roles, as carers and housewives. Their personal contentment and desire for women’s company was also a consideration: it was said that the men at Jamestown had hearts that were ‘enflamed … through the wants of the comforts of marriage’.

Intimacy aside, women were sent to resolve serious concerns about the security and permanence of the colony. If the English were to maintain a foothold in North America, the colony desperately needed more people to replenish those who had died through disease, hunger and violence. As mothers and wives, women were seen as having an essential part to play in ‘settling’ the status of the colony. Writing in 1621, the Virginia Company announced that only women would serve to ‘tie and root the planters minds to Virginia by the bonds of wives and children’. Before the arrival of the brides, there had been very few English women in the colony, leaving nearly all of the young, male colonists unmarried and available. There may have been brides before, who were written out of history though. Archaeologists at the Jamestown site have found plenty of material evidence to suggest that Native American women took up residence in the fort; perhaps as domestic helpmeets or sexual partners (although this was never documented in English records). But Native American women were not, in the eyes of contemporaries, fitting partners. English women were needed if an English – Christian – society was to be kept intact.

All of the women who ventured to the Jamestown colony in the years 1619-1621 to become brides to colonists had to prove that, like Anne Rickard, they were suitable. Previous arrivals had included Bridewell inmates, women who were guilty of vagrancy and petty crimes like ‘night-walking’. This time the Virginia Company announced that it required only ‘young, handsome, and honestly educated maids’ and, beginning in the summer of 1619 through to spring 1620, 90 women set sail to the colony, followed soon afterwards by 49 women in the summer of 1621.

The first task that women had was to secure their passage, by requesting testimonials and recommendations from people who were willing to accompany them, in person, to the Virginia Company. They activated the networks of associates, friends and kin that they had in London and elsewhere, asking them to support their claims. Mary Ghibbs, 20, who was born in Cambridge, asked her uncle Lott Peere (who she lived with) and his associate Gabriel Barbour to recommend her; both who were deeply involved in the affairs of the Virginia Company. Ann Jackson, also 20, whose father William, a gardener, lived in Westminster, requested his help and the Virginia Company recorded that with his ‘consent she comes’. Richard Hoare and Joan Child, the brother and sister of Audrey Hoare, 19, an apprentice to a fustian maker, accompanied her to the Virginia Company’s office. Having family and friends present in London was a kind of security—the company could be sure that these were not desperate young women who were running from a scandal.

It is clear from the statements they made to the Virginia Company that they came from a range of social backgrounds: daughters of gardeners and shoemakers, as well as the kinswomen of gentlemen, such as Margaret Bourdman, 20, the niece of Sir John Gypson, who received ‘good testimony’ from her employers and neighbours. The skills that they claimed to possess reflected this variety of experience and status: while Ann Tanner, 27, the daughter of a husband-man in Chelmsford, knew how to spin, sew, brew, bake, make cheese and butter – general ‘huswifery’ [sic]. Ann Harmer, 21, the daughter of a gentleman, stated that she knew how to ‘do all manner of works gold and silk’. Ghibbs noted that she was skilled in making bone lace, an assertion, it seems, that was meant to bolster her gentle status, femininity and moral upstanding. No doubt some attributes would be more practical than others on arrival at Jamestown.

The women also showed their willingness to go, perhaps even hinting at their suitability for the tough environment of Jamestown. Abigail Downing, who voyaged to the colony a little later in 1623, paid the cost of her own passage so that she would be ‘free to dispose of her self when she commeth to Virginia’, in order to find and marry an ‘honest man’. She also promised that she would ‘take pains and … do all service that is fit’ in order to ‘earn her diet’. We do not know Abigail’s background or age, but she was already widowed and was said to be from a family of ‘honest people’ and ‘good fashion’ (meaning their behaviour or demeanour). Whatever accomplishments she had, whether in ‘huswifery’ or the finer art of lace-making, she could apply her skills to running her own household or commerce in Jamestown. Her oath would have been comforting news to the jaded colonist Thomas Nicholls, who complained the same year that ‘women do … nothing’, except ‘devour the food of the land without doing any days deed’.

Although many of the women travelled alone, as Abigail Downing did, some were accompanied by relatives, or planned to meet family in the colony. Ann Jackson from Salisbury set off on this adventure together with her brother John; and Ursula Clawson’s kinsman, Richard Pace, accompanied her alongside his wife back to Virginia, where he had already settled. Jamestown was often the final destination in journeys they had made across England, from Cheshire, Yorkshire, Buckinghamshire, Berkshire, Cambridgeshire, Essex, Herefordshire and Wiltshire – even Denbigh in Wales – before setting sail from the Isle of Wight. Many had left home already to take up employment in London and family separation, especially at the point when you people went into service and afterwards married, was expected. London may have seemed as foreign to Margaret Bourdman from Bilton, Yorkshire, as Jamestown did.

On their voyages to Virginia, the same care that was shown towards ascertaining the upstanding character of the women was also taken towards their welfare aboard ships. Various bills recorded by the Virginia Company show that they provided essential items for the voyage, such as clothing, including white lambskin gloves, beds and bedding. For passengers with a sweet tooth, prunes were purchased. These items, such as the coifs that were bought, allow us to glimpse into the lived experiences of women on arrival, too. Coifs were white caps that only wives were permitted to wear on their heads, as a sign of modesty and the elevated social status of married women. Before leaving England, most had been unmarried women in service. Now they would enjoy greater social standing.

When they arrived in Jamestown, the women met their prospective husbands and, by the Christmas of 1621, all were married. It has been suggested that they were ‘sold’ to the highest bidders for 150lb. of tobacco, but this is not true. The tobacco, which was worth approximately £18 when sold in England, was to cover the cost (£12) of transporting each woman to Virginia, with £6 profit for the Virginia Company’s pocket. However, as the original estimated cost to outfit each woman stood at £8 (money that was invested by shareholders), the Virginia Company was mostly recuperating its losses. Let us not assume either that what ensued was literally some sort of cattle market. These were women of ‘better sort’, who were unlikely to have been left unaccompanied, and any proposals that they received would probably have taken place behind closed doors and not out in the open.

I would argue, too, that requiring the tobacco planters to pay for a wife was a way to ensure that the women – from good, ‘honest’ families – would only be matched with suitable men. As in England, this was a means to test the economic and social worth of their prospective husbands: were they the ‘most honest and industrious’ planters, like they had been promised, and could they afford the costs associated with setting up their own households, to support a family? What may seem like a cold transaction today, was a kind of security for the women, who were cut off from the support networks they left behind in England.

The Virginia Company prescribed that no woman was to be pressured; instead she would have her choice of husband, whichever man she ‘fondly bestow[ed] her self’. The company plainly stated, ‘the liberty of marriage we dare not infringe’. If the liberty of English women was not violated, it is worth remembering that this was not the case for all women who arrived at Jamestown in 1619. Angelo, a Christian woman who originated from Angola, was sold to Captain William Pierce. She was among 17 African women who arrived in the colony in 1619, along with 15 enslaved African men, the first in English America. We know very little about their lives, but these are the real women who faced violence and were forced onto ships before disembarking at Jamestown. Their fates were tied up with those of the English women who married tobacco planters, who would reap the rewards of their unfree labour.

Misha Ewen is a Research Fellow at the Huntington Library in California.