For as long as dogs have been valued as companions, they have been a target for thieves. Their theft and ransom became a lucrative practice in the 18th century, with high-profile victims. 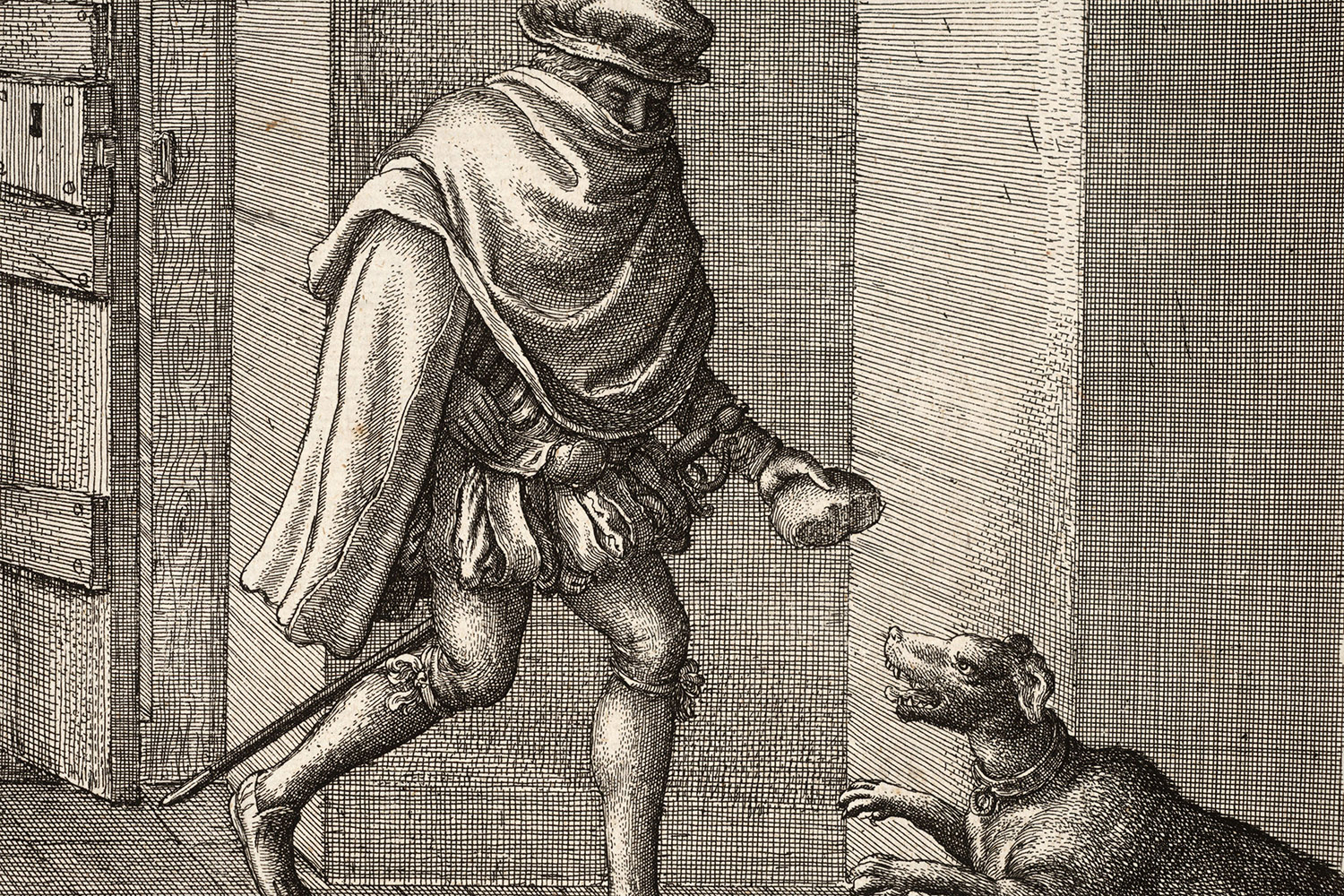 The Dog and the Thief, by Wenceslas Hollar, 17th century.

In June 1660, just one month after his Restoration, Charles II’s black spaniel-greyhound cross disappeared. After the offer of a reward provoked no response, the incensed monarch published an advert in the Mercurius Publicus appealing for the dog’s return, claiming the animal:

doubtless was stoln, for the Dog was not born nor bred in England, and would never forsake His Master. Whosoever findes him may acquaint any at Whitehal, for the Dog was better known at Court, than those who stole him. Will they never leave robbing His Majesty? must He not keep a Dog?

In the 18th century, adverts for lost dogs became a mainstay of newspapers across the country. These notices typically offered a reward (the going rate was half a guinea) and listed the type, size, colour and identifying marks of the missing animal. They reveal the scale and diversity of Britain’s dog population, which was fortunate enough to have owners with both the inclination and spare cash to attempt to recover their animals. Missing canines featured in lost dog adverts ranged from William Hogarth’s pug, Pugg, to Viscount Hatton’s greyhound-lurcher cross, the unfortunately named Slutt.

However, not all adverts included the names of the missing dogs or the identities and addresses of their owners, most likely because these animals were not necessarily runaways. Kate Smith at the University of Birmingham has studied lost property adverts in 18th-century newspapers and suggests many were placed by fences from the criminal underworld to enable owners to identify their stolen dogs and to arrange for payment of a ransom for their safe return, while allowing the thieves to avoid prosecution.

Dog theft could be a lucrative practice in the 18th century. Dogs were not always offered back to owners for a ransom, but were sometimes sold on, especially if they were valuable sporting animals. The 1745 sensationalised criminal biography of Bampfylde Moore Carew, self-proclaimed ‘King of Beggars’, boasted that he had ‘successfully followed the Trade of Dog-stealing’ in ‘making bold’ with gentlemen’s spaniels, pointers and hounds (his marks apparently included the Bishop of Salisbury’s setter). These dogs were ‘sold again to other Gentleman at a Distance therefrom; whereby he got abundance of Money, commonly selling a single Dog for several Guineas’. The biography claims that Carew had a gift – he could ‘seduce’ any dog away from their home whatever the nature of their temperament. In a portrait of Carew painted by Richard Phelps in 1750 he is accompanied by a pug, a high-status, fashionable lady’s lapdog, as a testament to his skills during his dog-stealing years.

Even if stolen dogs went unclaimed or unsold, their thieves still stood to profit. A dog’s body had an appreciable value dead as much as it did alive. There was a thriving market for dog-skin leather gloves, which were a must-have luxury item and reputed to moisturise the hands. Even the philosopher Jeremy Bentham, who argued against causing unnecessary suffering to animals, owned a pair.

Dog theft exposed both the dog’s often considerable sentimental value to its family and its financial worth in the eyes of society. Occasionally the dispossessed dog owners of 18th-century London tried to take advantage of the disparity between the two, as in the advert placed in the Morning Chronicle of 11 July 1780 appealing for the return of Bravo, a ‘remarkably large and fat dog’ which emphasised that as the dog was ‘old, and not broke, he can be of no use but to the owner’. However, thieves knew that strong attachments to individual dogs (regardless of their usefulness) left owners vulnerable to demands for the ransom of their companions.

Although theft had long been a risk for dog owners, 19th-century cities provided particularly fertile ground for thieves. Loving relationships between pet dogs and people were an increasingly accepted feature of middle-class domestic life and few would risk the thieves’ habit of mailing an unclaimed dog’s appendages – or, worse, its head – for the sake of a ransom payment. Such was the case for the poet Elizabeth Barrett (later Barrett Browning), who had to pay off the ‘organised dog-banditti’ of Victorian London’s slums for the safe return of her spaniel, Flush, on three separate occasions. When the dog was stolen to order in 1843 she told her former tutor that ‘money was the least thing to think of in such a case; I would have given a thousand pounds if I had had them in my hand’.

Worryingly for Barrett, the dog thieves claimed to have been casing Flush for two years and threatened to keep their attentions on the dog. In light of this warning, it was unsurprising that Flush was stolen again on 2 September 1846. It is this event (now the most famous dognapping of the 19th century), documented in her correspondence with her soon-to-be husband, the poet Robert Browning, which provides the dramatic climax to Flush, Virginia Woolf’s 1933 fictionalised biography of the dog. Both Barrett’s father and Browning disapproved of paying the thieves ransom money and her brother hampered negotiations when he tried to haggle the cost down. Barrett, however, was resolute. ‘I cannot endure to run cruel hazards about my poor Flush for the sake of a few guineas, or even for the sake of abstract principles of justice’, she wrote to Browning. She made the trip to Whitechapel herself to entreat with the gang leader of the ‘Fancy’ (the name was a dark joke on the gang’s part, as this was the collective term for the dog-showing world). Six guineas and five days later, Flush was reunited with his mistress.

Barrett’s correspondence highlights that the theft of a dog inflicts a double trauma on the dispossessed owner, whether in the 19th century or the 21st: they endure the loss of a companion, as well as the worry that the dog may be suffering in its new surroundings. Today’s booming pandemic puppy market has generated fresh demand for stolen dogs. The law – which regards companion dogs as inanimate objects – still does not recognise the importance of pets to their human families.

For as long as people have valued individual dogs for their companionship, skills or attributes – and others have been willing to pay a substantial price for this themselves – dogs have attracted the attention of thieves. Elizabeth Barrett’s experience with Flush demonstrates that loving owners place a high price on canine companionship, and are determined to be reunited with their beloved dogs, whatever the cost.

Stephanie Howard-Smith is a historian of human-dog relations in the 18th century and research administrator for the AHRC-funded Pet Histories and Wellbeing Project.