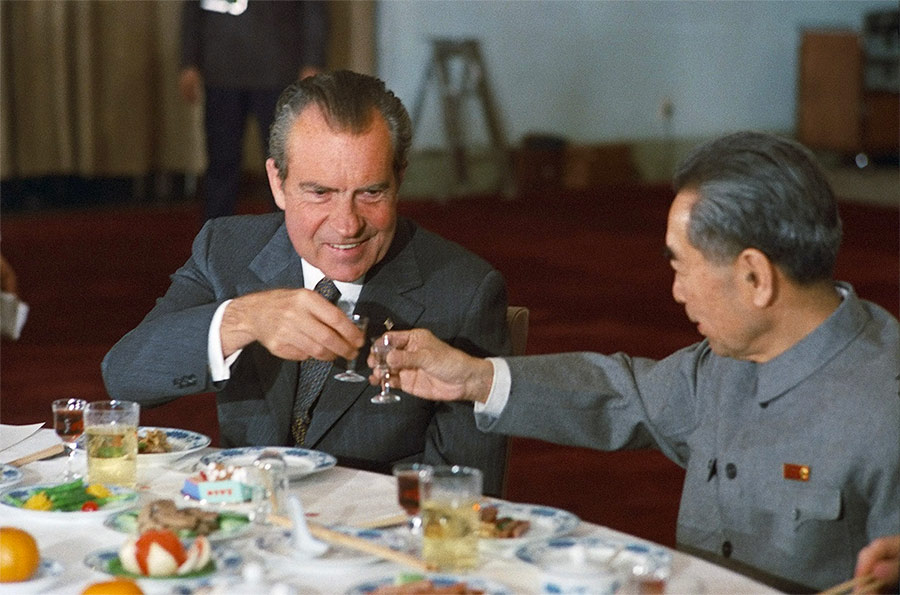 In June 2018, Donald Trump torpedoed the G7 Quebec summit meeting at risk of provoking a trade war over import tariffs with the United States’ allies and, just days later, cosied up to North Korean leader Kim Jong-un, hitherto America’s bitter enemy, in their Singapore summit. Astonishing as these developments seem, they are nowhere near in scale to the surprises sprung by another US president nearly half a century ago. On 15 July 1971, onetime arch-Cold Warrior Richard Nixon went on television to make the stunning announcement that he would visit the People’s Republic of China, at the time the United States’ bitterest enemy, in early 1972. One month later, on 15 August 1971, Nixon was back on television to announce a bombshell decision to unilaterally close the gold window, the linchpin of the postwar international monetary system established at the Bretton Woods conference in 1944.

Like Trump, Nixon had a penchant for dramatic initiatives in the international arena. In Trump’s case, his constant disruption of established patterns is intended to make himself the one who must be satisfied or the deal is dead. The more sophisticated Nixon used unpredictability, secrecy and risk-raking as instruments of global leadership to keep enemies guessing about his intentions and get allies to toe the line. ‘The more you risk if you lose’, he once remarked, ‘the more you stand to gain if you win. Nothing great can be accomplished without taking risks.’

Nixon announced his opening to China just as the Soviet Union was holding out over a new détente. He told aides: ‘We’re using the China thaw to get the Russians shook.’ The potential Sino-American rapprochement was a threatening development for the Soviets and a blow to their self-esteem because Nixon clearly intended visiting Beijing before Moscow. According to one Russian diplomat, the Foreign Minister Andrei Gromyko ‘went about for weeks [afterwards] with a black expression’.

The communist regime that came to power in Beijing in 1949 had engaged in military conflict with the US through its intervention in the Korean War of 1950-53. Accordingly, successive US administrations had worked to keep ‘Red China’ isolated from the non-communist world for the following 20 years. In 1967, however, Nixon penned an article for Foreign Affairs, the in-house journal of the foreign-policy establishment, in which he declared: ‘We simply cannot afford to leave China forever outside the family of nations, there to nurture its fantasies, cherish its hates and threaten its neighbours …The world cannot be safe until China changes. Thus, our aim should be to induce change.’ The intensification of the Sino-Soviet split, which saw the two communist powers engage in border fighting in 1969, provided the opportunity.

Gambling that the Chinese were more fearful of the Soviets than of the US, Nixon toned down his government’s conventional anti-Beijing rhetoric, reduced the US military presence in the Taiwan straits and made confidential overtures through third parties, such as President Yahia Khan of Pakistan. When the Chinese signalled a willingness to receive a senior envoy to discuss improving relations, National Security Adviser Henry Kissinger went to Beijing in conditions of extreme secrecy under the code-name ‘Polo’ on 9 July 1971. While there, he set up the Nixon visit that became the greatest coup of his presidency.

As well as reaping a huge PR success, Nixon established a good working relationship with Premier Zhou Enlai, the principal Chinese negotiator, during his week-long sojourn from 21 to 28 February 1972. He was also gratified to have a long private meeting with the ailing Mao Zedong. The two sides agreed the Shanghai Communique, a much more significant outcome than the vaguely worded Trump-Kim Singapore statement. It established a Sino-American entente against Soviet ambitions in the Pacific-Asia region. It also defused tensions over Taiwan through US recognition that the island was part of China and that it was committed to withdraw military forces stationed there once the Communist and Nationalist Chinese had settled their differences peacefully, an ambiguous construct that kept both sides guessing about US intentions.

Nixon did not, however, get what he most wanted from the Chinese in the short-term: a promise to stop sending military supplies to North Vietnam and to pressure Hanoi into negotiating a peace settlement for the Vietnam War on terms acceptable to the US. In the longer-term, however, the United States benefitted from the lasting détente between the two countries that Nixon initiated. When Cold War tensions between the US and the Soviet Union were renewed in the 1980s, Ronald Reagan’s administration did not have to face a two-pronged communist axis.

Nixon’s other great surprise of 1971 did not turn out as well as his Chinese initiative. By now the America’s long postwar boom, which had engendered broad-based prosperity, was petering out in the face of rising unemployment, accelerating inflation and greater trade competition from Western Europe and Japan. Treasury Secretary John Connally, a brash Texan, persuaded the football-loving Nixon that a ‘big play’ was needed to get Team America back on the economic offensive. The president gathered his principal economic advisers for a secret meeting at the Camp David retreat in Maryland on the weekend of 13-15 August 1971 to develop what became known as the New Economic Policy (later designated NEP, after it was discovered that Lenin had called his programme by the same name). It consisted of five elements: tax cuts to boost growth; spending cuts to keep the budget in balance; the first peacetime wage-price controls to restrain inflation; a 10 per cent surcharge (called a border tax) to curb imports; and temporary suspension of dollar convertibility into gold. Despite pre-empting the popular western series, Bonanza, Nixon electrified the nation with his Sunday evening television announcement of the plan. This accomplished his domestic political objectives of seizing the initiative and appearing in command on the economy.

The reaction abroad to what was seen as naked economic nationalism was shock and horror. European stock markets crashed, foreign currency markets closed temporarily and central bankers felt obliged to let their currencies float against the dollar for the first time since the Second World War. Concerned that its postwar economic recovery was under threat, Japan alone tried to defend its currency exchange rate through massive purchase of US dollars, but soon abandoned this as ridiculously expensive.

The Bretton Woods system had pegged the dollar at a fixed price in gold ($35 an ounce) and required other nations to maintain their currency values in fixed relation to the dollar. This provided both stability and liquidity as the international economy recovered from the Second World War, but the dollar had become overvalued as other nations, notably West Germany and Japan, began to operate trade surpluses with the US. In 1958, 1960 and 1968 there had been threatened runs on US gold reserves as foreign dollar-holders began to exchange their surplus greenbacks for gold for fear of a surprise dollar devaluation.

The Bretton Woods system could not have survived for much longer, but the benefits it still offered had hitherto ensured its preservation. For the US, now a balance-of-payment deficit nation, the overvalued dollar hurt exports but lowered import, international investments and foreign war costs. For surplus nations, it meant cheaper exports to the US but the resulting inflow of dollars with no place to go inflated local currencies. Guided by Connally, Nixon had decided that the costs of this disequilibrium now outweighed the benefits for the US, but his unilateral decision to close the gold window was tantamount to economic warfare against its allies.

Nixon and Connally wanted other nations to undertake a substantial upward revaluation of their currencies, but none did so. Japan, identified as the most predatory exporter, allowed a six per cent yen appreciation against the dollar, whereas the US wanted an unrealistic 25 per cent. As the stand-off continued, US tariffs hit international trade, arousing fears of a global recession. In Connally’s calculation, the longer the monetary confrontation lasted, the more inevitable US victory became because it was less dependent on export trade than other industrial nations, but his assurances did little to calm Wall Street. On 22 November 1971, Bernard Lasker, head of the New York Stock Exchange, telephoned the president with the warning: ‘We cannot ride with the impasse Connally keeps projecting.’ Nixon himself was also beginning to realise that he could hardly go to Beijing, and later Moscow, in 1972 as the leader of a western alliance fractured by economic disagreements.

Instructed to negotiate mutual concessions with other nations, Connally found the Europeans and Japanese prepared to drive hard bargains. It was Nixon himself who broke the deadlock in agreeing during a meeting in the Azores on 13-14 December with French President Georges Pompidou to devalue the dollar in effect by 8.6 percent. This laid the basis for finance ministers to negotiate devaluations of their own nations’ currency in a meeting at Washington on 17-18 December, with Japan allowing a 16.9 per cent appreciation of the yen against the dollar and West Germany a 13.5 per cent appreciation of the mark.

The Nixon administration had learned that it could not strong-arm trade competitors into one-sided monetary concessions, but the compromise of December 1971 was built on sand. The private money markets soon challenged the new fixed exchange rates agreed by governments. Currency crises came and went throughout the remainder of the 1970s, stoking inflation in the US and elsewhere. The US never gave serious thought to reopening the gold window in pursuit of monetary stability because the volatile times made it impossible to fix a defensible value for the dollar. The gold standard died on Nixon’s watch, but he was not responsible for killing it, only for determining the time and manner of its passing.

Whatever comes of Donald Trump’s June 2018 initiatives, they are unlikely to match Nixon’s actions of July and August 1971 in historic significance. The China opening helped change the course of the Cold War, while the gold window closure signalled the demise of the postwar international monetary system. After his enforced resignation from office, a disgraced Nixon spent the last 20 years of his life talking up his foreign policy achievements in vain pursuit of rehabilitation. Despite overselling himself as a geopolitical maestro, his China opening is broadly recognised as one of the greatest achievements in 20th-century US foreign policy. In contrast, Nixon did not trumpet his role in ending the Bretton Woods system because it did little to alleviate the broader problems of the US economy. He approached international economic policy with a nationalist mindset similar to Trump’s, as demonstrated by remarks captured on the secret Oval Office tapes. With the recently negotiated monetary arrangements breaking down, Nixon met with economic advisers to discuss the situation on 23 June 1972. Appraised that the Italian currency was in considerable trouble, he responded: ‘I don’t give a shit about the lira.’

Iwan Morgan is Professor of US Studies at the Institute of the Americas, University College London