Revolution on the Black Sea

Sevastopol, Russia’s principal warm-water naval base on the Black Sea, was not immune to the spread of revolutionary sentiment in 1917. 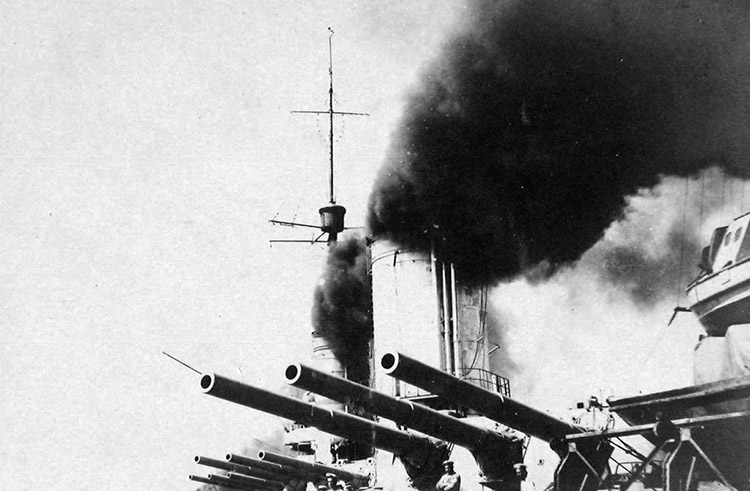 In this centennial year of the Russian Revolution, much interest is centred on events that took place in Petrograd, imperial Russia’s capital city. Yet a significant amount of revolutionary action in 1917 took place in Sevastopol, Russia’s principal warm-water naval base on the Black Sea. The Crimean city, Russia’s Portsmouth, had form in this respect. Honoured in Russia for its 349-day-long valiant defence in 1854–55 during the Crimean War, Sevastopol also became regarded as a hotbed of discontent.

Widespread civil unrest broke out in 1830 in the wake of a plague epidemic and the consequent isolation of Sevastopol. Military action suppressed a brief rebellion of townsfolk against the local authorities. In 1905, when much of Russia was shaken by revolution, sailors of the Black Sea Fleet mutinied on two separate occasions. In late June, the crew of the battleship Potemkin took control of the warship at sea and steered it to Odessa, events which were immortalised in Sergey Eisenstein’s film of 1925.

The second insurrection was a much bigger affair, involving a substantial proportion of the fleet harboured at Sevastopol. It proved to be one of the most violent episodes of the 1905 revolution. On 28 November, Lieutenant Pyotr Schmidt assumed command of the light armoured cruiser Ochakov and proclaimed that if Tsar Nicholas II did not call a democratically elected constituent assembly, he would ‘declare Crimea independent and appoint himself as its president and commander of the Black Sea Fleet’. Unfortunately for Schmidt and his supporters, the army and the majority of the navy remained loyal to their emperor. As a result, the mutiny was crushed. Schmidt and the other ringleaders were tried and executed by firing squad on 19 March 1906.

The defeats and losses at the battlefronts of the First World War, not least mounting economic pressures and food shortages at home, steadily reduced the authority of the tsarist government. When Nicholas II abdicated on 15 March 1917, the creation of a provisional government failed to stabilise the situation. A wave of political activity followed across Russia. Unsurprisingly, Sevastopol did not remain immune from such developments. On 19 March elections to a soviet (council) of deputies took place in the city. At the same time, sailors’ committees were formed on the ships of the Black Sea Fleet, commanded by Vice Admiral Alexander Kolchak.

The Bolshevik cause received a massive boost with the arrival of Vladimir Lenin in Petrograd to popular acclaim on 16 April 1917. He had returned from exile in Switzerland courtesy of a German sealed train. Under his leadership and alluring promises of ‘peace, land and bread’, the Bolsheviks fomented popular concerns and anti-war protests – all carefully preparing the ground for their revolution later in the year. Kolchak sensed the impending catastrophe, predicting that he would soon have ‘to deal with the historical disgrace of a senseless mutiny during wartime’. On 22 April, Sevastopol witnessed mass crowds of people welcoming home former sailors released from either exile or prison, including those who had participated in the mutinies of 1905.

Bending to the demands of the crews, on 13 May Kolchak ordered the renaming of battleships with imperial names such as Imperator Alexander III, which became the Volya (Will). By the early summer, discipline within the Black Sea Fleet was fast breaking down. On 20 June a delegation from the United States navy, headed by Rear Admiral James H. Glennon, visited Sevastopol, an important port of call on a tour of naval bases to determine how best to support the Russian war effort against Germany.

Having inspected a number of coastal defence batteries and other shore installations, Glennon encountered ships ‘full of idle sailors in dirty white uniforms milling aimlessly around’. A mutiny was already well underway. Although the American visitor, at great personal risk, intervened to save the lives of a number of Russian officers, Glennon could not restore them to their positions of authority. Two days later he departed Sevastopol by train bound for Petrograd. A dejected Kolchak, recalled by the provisional government for ‘failing to maintain discipline’, made the same journey. He was lucky to be alive, having survived a violent confrontation with sailors aboard his headquarters ship, the Georgii Pobedonosets.

Bolshevik influence and power within Sevastopol grew steadily during the summer and early autumn of 1917, paralleling events elsewhere across Russia. On hearing the news on 7 November that the Bolsheviks had seized power in Petrograd, the Sevastopol Soviet of Military and Workers Deputies took power into their own hands, sending their colleagues in Petrograd a congratulatory telegram: ‘We welcome the victorious revolution. Soviet has taken power. Waiting for instructions. Sevastopol.’

During November and December the Bolsheviks completed their takeover of the Black Sea Fleet. The anniversary of the Ochakov mutiny on 28 November 1917 provided a propaganda opportunity too valuable to miss. Sevastopol’s Izvestiya (News) declared: ‘Twelve years ago, on this day … the Black Sea Fleet raised the red banner of mutiny, headed by its Red Admiral, P. P. Schmidt.’ But the paper also informed its readers that the rebellion of 1905 was ‘premature’ because ‘the rest of Russia was not ready to support it’. A different situation, however, prevailed in 1917 for the Bolsheviks had seized power across most of the land. Now there would be no turning back. Many of those seen as enemies of the revolution (and hence of the people) were rounded up. At least 30 naval officers, including three admirals, were shot on 28 December 1917 on Sevastopol’s Malakhov Hill, a key bastion of the Crimean War defences. The Red Terror, which would soon become an orgy of death and destruction, had begun.

Crimea and Sevastopol were to assume important roles in the Russian Civil War between the Reds and the monarchist Whites, which lasted until November 1920. Meanwhile, the city would be occupied by a series of foreign powers at the close of the First World War. Peace, stability and economic recovery in revolutionary Sevastopol would all have to wait. As ever, the people suffered.

Mungo Melvin is the author of Sevastopol’s Wars: Crimea from Potemkin to Putin (Osprey, 2017).