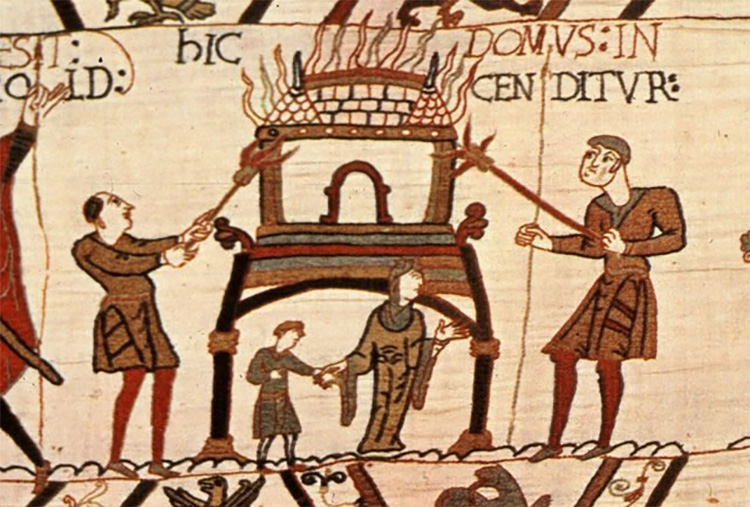 The Battle of Hastings is the most famous event of the Norman Conquest, but it was only the opening engagement in the invaders' consolidation of power in England. For several years afterwards, the country was riven by internal conflict as the Normans fought to extend their rule, climaxing in a notorious campaign known today as the ‘Harrying of the North’.

The Harrying, which took place over the winter of 1069–70, saw William’s knights lay waste to Yorkshire and neighbouring shires. Entire villages were razed and their inhabitants killed, livestock slaughtered and stores of food destroyed. This scorched-earth operation is one of the defining episodes of the Conquest, not just from a military-political perspective but also in terms of how it has shaped modern perceptions of the Normans as a tyrannical and merciless warrior class. But why were such brutal measures considered necessary and why was the north in particular targeted?

By the winter of 1069, the Norman war machine had been active in the field for more than three years. Throughout 1067 and 1068 there had been a succession of localised revolts and incursions by foreign foes in various corners of the country – Devon, Kent, Herefordshire and the midland earldom of Mercia – although each of these was swiftly put down. Castles were established, including in the major towns of Warwick, Nottingham, York, Lincoln, Huntingdon and Cambridge, in an effort to quell the disturbances and impose control. Nevertheless, it is important to recognise that, even by the beginning of 1069, William was still not master of the entire kingdom. His authority extended no further north than York and it was in the region beyond that the greatest threat to his rule lay.

William’s early attempts to bring the northerners under his heel had involved appointing native English earls to govern them: first Copsig and then Gospatric. Both appointments had been dismal failures: the former was assassinated by a rival in 1067; the latter defected in 1068 to the midland rebels. Finally, in January 1069, William sent one of his own men, Robert Cumin, at the head of an army to conquer the region by force, only for them to be ambushed and slaughtered at Durham.

Worse was to come. That summer the Normans found themselves at the centre of a perfect storm, as their enemies all began marching at once.  Foremost among them was a coalition of Northumbrian noblemen, including Gospatric but led by Edgar Ætheling, then around 17 years old and making a fresh bid for the crown, having already been briefly acclaimed king in London following Harold’s death in 1066.

The Northumbrian threat was compounded in August when a Danish invasion fleet numbering some 240 or 300 ships – depending on which source we believe – arrived in the Humber. The two forces swiftly formed an alliance and together attacked York. Meanwhile there was further trouble on the Welsh border, where a rebellious thegn named Eadric had joined forces with the Welsh kings and the men of Chester. In the south-west, the men of Devon and Cornwall were in revolt.

It is unlikely that these risings were co-ordinated; the impression given by the sources is that their timing was coincidental. But the crisis nonetheless tested the Normans to the limit and marked a crucial turning point in the Conquest.

Leaving the problem of the south-western insurrection to his deputies, William first confronted the Welsh and their allies, crushing them at Stafford, before marching north. He eventually reached York a little before Christmas, only to find that, on hearing of his approach, the Northumbrians and their Danish allies had strategically withdrawn: the former to their hiding-places in the hills and woods; the latter to their ships in the Humber.

Frustrated by his inability to meet his principal enemies in battle, William was forced to adopt a new strategy. He secretly approached the Danes, promising them a vast amount of silver and gold if they would leave England in the spring, to which they readily agreed. That accomplished, William then turned his attention to the recalcitrant Northumbrians, who had proven a perennial thorn in his side. Shortly after Christmas in 1069 he divided his army into raiding-parties, which he dispatched to carry out the Harrying.

The object of the campaign was two-fold. First, William sought to flush out and eliminate the Northumbrian rebels. More importantly, by destroying the region’s resources so comprehensively, he sought to put an end to the cycle of rebellions by ensuring that any future insurgents would lack the means to support themselves. The campaign was as efficient as it was effective. William’s armies spread out over more than one hundred miles of territory, as far north as the River Tyne. The 12th-century chronicler John of Worcester writes that food was so scarce in the aftermath that people were reduced to eating not just horses, dogs and cats but also human flesh.

Another historian, Orderic Vitalis – a contemporary of John’s – claims that as many as 100,000 people died as a result of famine in the following months. While we are rightly suspicious of such a round figure, a death toll somewhere in the tens of thousands is not hard to believe: this at a time when the total population of England was probably little more than two million.

The affected region took a long time to recover. Symeon of Durham writes that no village remained inhabited between York and Durham and that the countryside remained empty and uncultivated for nine years. Even by 1086, when Domesday was compiled, one third of the available land in Yorkshire was still recorded as vasta ('waste').

In the course of just a few weeks William had not only clearly demonstrated the punishment that awaited those who rose against him, but he had also snuffed out what lingering hopes the rebels might have had of driving out the invaders. There were further risings in the years to come, but William never again faced a crisis of the same magnitude as he had in 1069. What Hastings had heralded, the Harrying confirmed. The Normans were here to stay.