The Coins of Æthelred the Unready

The changing designs found on Æthelred’s coinage suggest how the prevailing mood changed during his reign.

Far from being ‘unready’ (an unfortunate byname, meaning ‘poorly counselled’), Æthelred was a more capable king than his reputation would have us believe, a theme taken up in the May issue of History Today, in which Simon Keynes reappraises the monarch's career.

Æthelred’s coinage, for example, was the result of a monetary system which must rate as one of the most impressive aspects of Anglo-Saxon royal government. As designs for the coins were changed, old batches were recalled and new batches issued, allowing them to maintain control of the economy. But as well as this advanced system, the designs on the obverse (front, shown here on the left) and reverse of the coins tell the story of Æthelred’s reign. The king’s name, portrait and royal style (the title he was given, e.g., ‘king of the English’), on the obverse, were complemented by the name of the moneyer and the mint who had made it, along with a Christian design or motif, on the reverse.

The hand of God and the presence of Christ (signified by Alpha and Omega on either side as 'A w', just visible) signify divine approval in the early years of Æthelred’s reign. On the reverse can be read the mint's location: London.

A new design retains the explicit emphasis on divine presence, witht the letters C-R-U-X surrounding a cross. Minted in Canterbury.

The adoption of a striking portrait, modelled on a coin-type from imperial Rome, reflects growing confidence in the king. Minted in Cambridge. 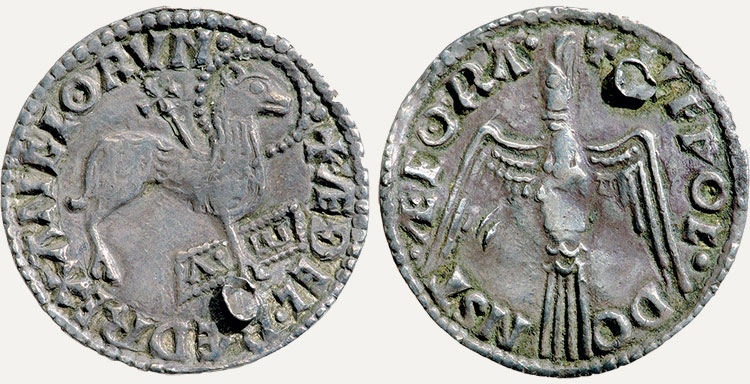 A short-lived design, in which the king’s portrait was replaced by the Lamb of God, and the cruciform design on the reverse by a dove, symbol of the Holy Spirit. The significance of this is unknown.

In tumultuous times at the end of Æthelred’s reign, the Small Cross design recalls the earlier peace and stability of Edgar’s reign. Minted in Lincoln.