The World From on High

A medieval map combined with a view of the Earth from space is a reminder of humanity’s ancient desire to chart the world from above. 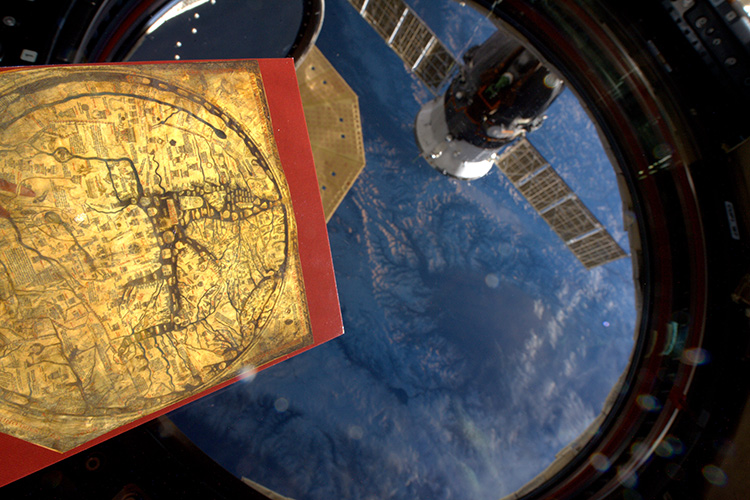 On February 11th, 2016 the British astronaut Tim Peake tweeted a picture from aboard the International Space Station (ISS). Captioned ‘a copy of one of the oldest maps in Britain, now exploring the newest frontier here in space’, it showed a facsimile of the English Hereford map (c.1300), on display at the city’s cathedral, where it has been for at least 400 years.

The 700-year-old Hereford map offers a unique insight into what medieval people thought the Earth looked like. The map, drawn onto a single piece of vellum measuring 5ft 2in by 4ft 4in, is oriented in the true sense of the word with east (Latin oriens) at the top and has Jerusalem at its centre. The map is of the type known as the T-O: the O of the inhabited world is divided into the three known continents – Europe, Africa and Asia – by the watery T formed by the intersection of the rivers Don and Nile and the Mediterranean, whose position in the middle (medius) of the Earth (terra) is clear on Peake’s photograph.

With its 1,091 inscriptions, the map was an attempt to summarise human knowledge in fields as diverse as geography, ethnography, zoology and history. The inscription that shows the location of Hereford has at some point been rubbed away and rewritten, probably as a result of generations of viewers marking their place in the world with their fingers.

What is striking about Peake’s image is how alike the two views of the Earth are. Both show us circles of lands indented with darker bays and seas. Though ‘the newest frontier here in space’ has only recently become accessible to us, the longing for an orbital view of the Earth is not new.

In his Phaedo, Plato, in the fourth century BC, described the Earth from above as a patchwork of terrains and vegetations, stitched together like a leather ball. Another legend, from the fourth century AD, has Alexander the Great build a flying machine – made from a basket tethered to two griffins – which he used to fly to such a height that the Earth looked to him like a threshing floor encircled by a serpent. Mathematical proofs of the sphericity of the Earth have been around since antiquity and medieval people were aware that they inhabited a globe. The English mystic Julian of Norwich (c.1342-c.1416) wrote that she was shown the Earth in a vision: she held it – as round as a ball and about the size of a hazelnut – in the palm of her hand.

The most influential orbital view of the Earth, however, appeared in Cicero’s De re publica (54-51 BC). This dialogue on Roman politics concluded with the dream of the Roman military tribune Scipio Aemilianus (185-129 BC), in which he is visited by his deceased grandfather, the renowned general Scipio Africanus, and taken up to the sky. From ‘a high place full of stars, shining and splendid’ Scipio observes the cosmos and its stellar workings: the Milky Way appeared as a circle of brightest white, the stars were orbs far exceeding the Earth in size and the moon shone with light borrowed from the sun. Scipio despairs at the smallness of the Earth and, even more, that of the Roman Empire, exclaiming that ‘the Earth itself appeared to me so small, that it grieved me to think of our empire, with which we cover but a point, as it were, of its surface’.

Scipio’s cosmic vision became a cornerstone for cosmographical thought in the High Middle Ages through Macrobius’s Commentary on the Dream of Scipio, written in the early fifth century. Macrobius explained Cicero’s literary allusions to the shape and nature of the cosmos, employing a series of maps and diagrams to show the spherical Earth in relation to the celestial sphere – the convexity of the night sky on which the stars appear to turn around the Earth – and delineate the globe into climatic zones based on latitude. The Hereford map belongs to a similar intellectual world: its circle of lands does not represent a flat disk world, but rather the inhabited part of the northern hemisphere.

Peake’s view of the Earth has been anticipated for millennia. Antique and medieval thinkers lacked the technological but not the imaginative means to put themselves into orbit and look down on the Earth. Looking out of the window of the ISS onto a world where, in the astronomer Carl Sagan’s words, ‘everyone you love, everyone you know, everyone you ever heard of, every human being who ever was, lived out their lives’, gives us a share of the breathless wonder with which the ancients mapped their world.

Dale Kedwards is a historian of medieval maps at the University of Zurich.