Do you want to dance? As the 19th century wore on, the Victorians certainly did, requiring new venues in which to mix music and movement, whether a pub or a palace. 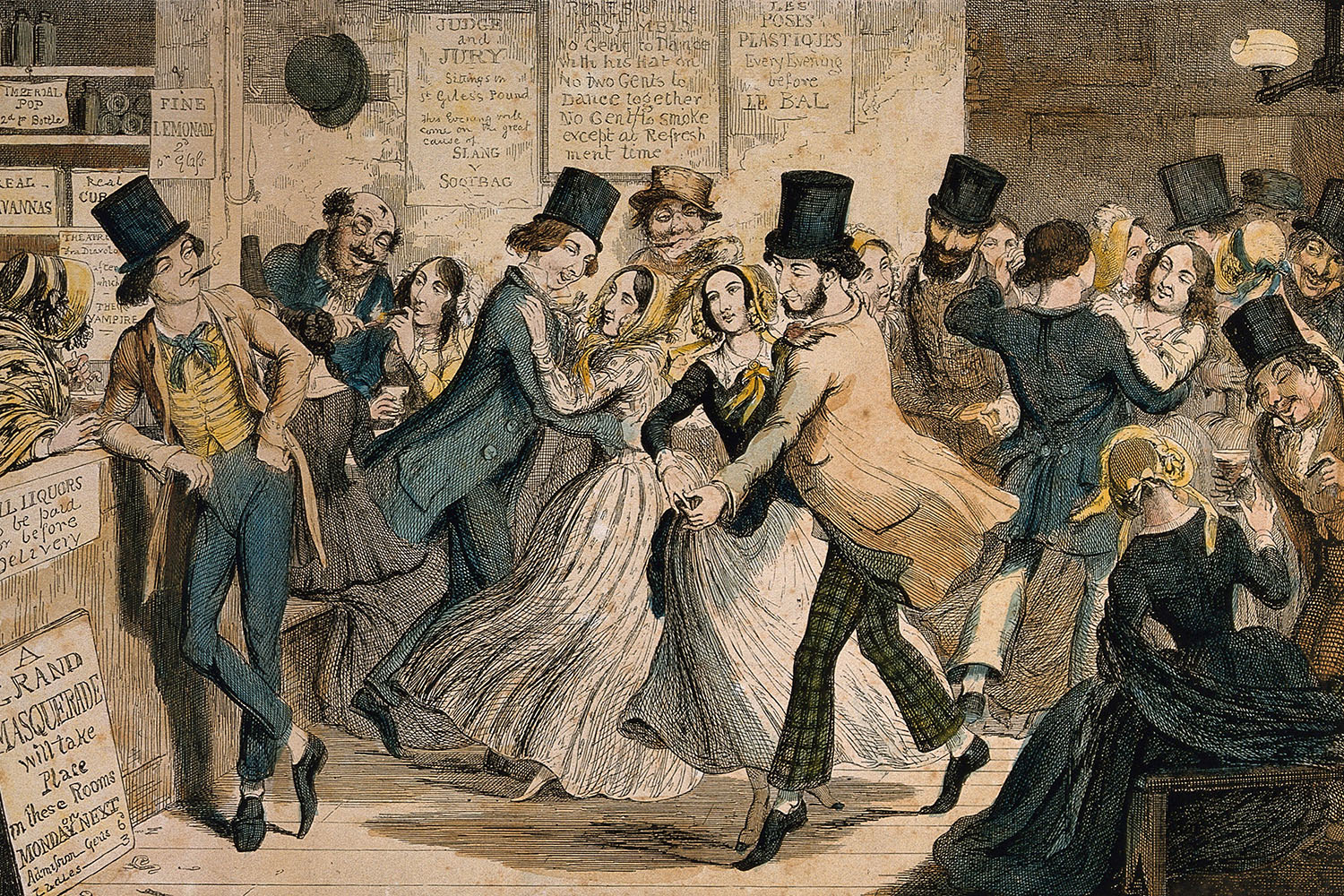 A drunken scene in a dancing hall with a sly customer eyeing a young girl. Coloured etching by George Cruikshank, 1848.

In the 19th century, people danced. We know that Jane Austen’s well-to-do heroines attended Palladian assembly rooms in Regency Bath in search of amusement and eligible beaux. Later in the century, we might call to mind the late-Victorian ballrooms of grand hotels, such as the Langham or the Savoy. At the opposite end of the social scale, Henry Mayhew reported the ‘vigorous laborious capering’ and clog-dancing of the London costermonger. The number of venues in which the average man and woman could ‘trip the light fantastic toe’ is quite remarkable.

Some public houses offered commercial dancing; established venues like the Star and Garter in Richmond hired out their large function rooms to the local gentry, while itinerant fiddlers toured small working-class pubs. The Morning Post describes a blind fiddler working the taproom at the Salmon and Compasses in Brooke’s Market, Holborn, a miserably poor district. Money is collected, tables dragged to one side. Then, to quote a customer, ‘when the fiddler is paid he strikes up and we jump up and dances’. 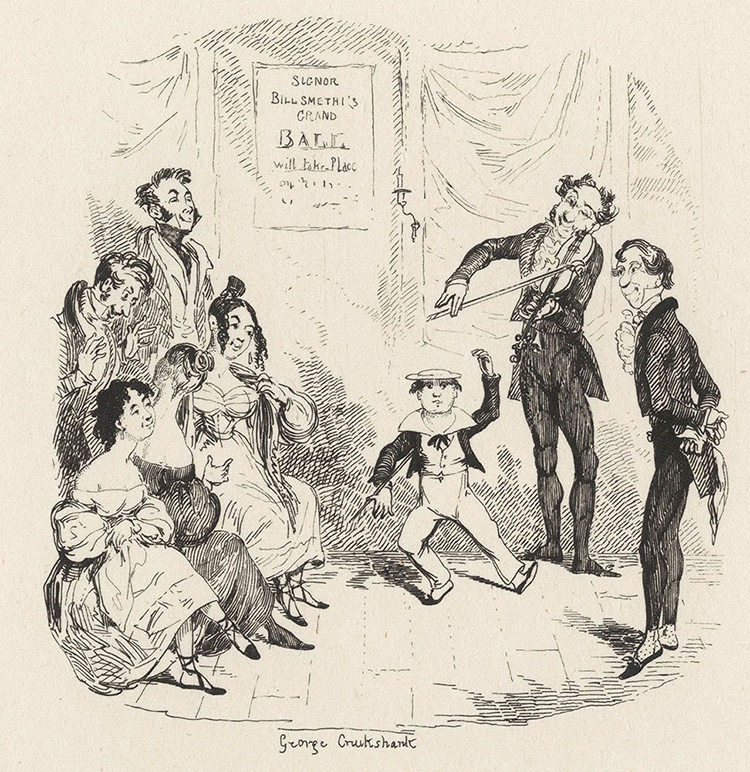 Entertainment licensing was a vexing issue and many establishments tried to avoid the attentions of the magistracy. One Jeremiah Callaghan, a ‘vagabond Irish fiddler’, enterprisingly turned a house in Whitechapel into a weekly club venue, where youths paid a penny admission and a further penny to dance. This ‘juvenile ball’ or ‘innocent hop’ was swiftly suppressed by the authorities. Others portrayed themselves as ‘dancing academies’, offering free instruction and trying to evade the attention of officialdom, while charging for food and drink. Some genuinely offered lessons – of varying quality – but regular balls for members were the main attraction. Charles Dickens described this system in Sketches by Boz, where Augustus Cooper is tempted by the prospect of a ‘grand ball’, only to spend weeks paying for training, which merely amounts to rattling round the dancing-master’s parlour with his daughter.

The summer brought with it new places to dance: outdoor venues at fairs and pleasure gardens. Algar’s Crown and Anchor Dancing Booth toured the fair circuit around London in the first half of the 19th century, a sort of pop-up assembly rooms, complete with wooden flooring. The lamp-lit tent was roughly 60 feet wide and 320 feet long, with several internal rooms, including a bar selling food and drink. Such was its fame that entrance cost a shilling, whereas rivals charged sixpence. Its modest band consisted of two harps, three violins, bass viol, two clarinets and a flute. One Canterbury local, Robert Cowtan, recalled that its arrival in town in the early 1830s attracted ‘almost all the well-to-do male population of my native city . . . [but] no woman with any regard to propriety and decency would be seen at such a gathering’.

Pleasure gardens, from London’s notorious Cremorne Gardens in Chelsea, famous for its late-night carousing and prostitution, to Manchester’s sedate Belle Vue, which closed at 10pm with ‘God Save The Queen’, offered full orchestras playing dance music to crowds on specially constructed sprung dancing platforms. With the growing popularity of the polka in the 1840s, these platforms became increasingly elaborate. At peak times, Belle Vue’s management employed three brass bands, so that dancing could continue throughout the day without interruption. The orchestra was even placed on a revolving platform, which could shift the players’ position to compensate for a strong wind dampening the sound. 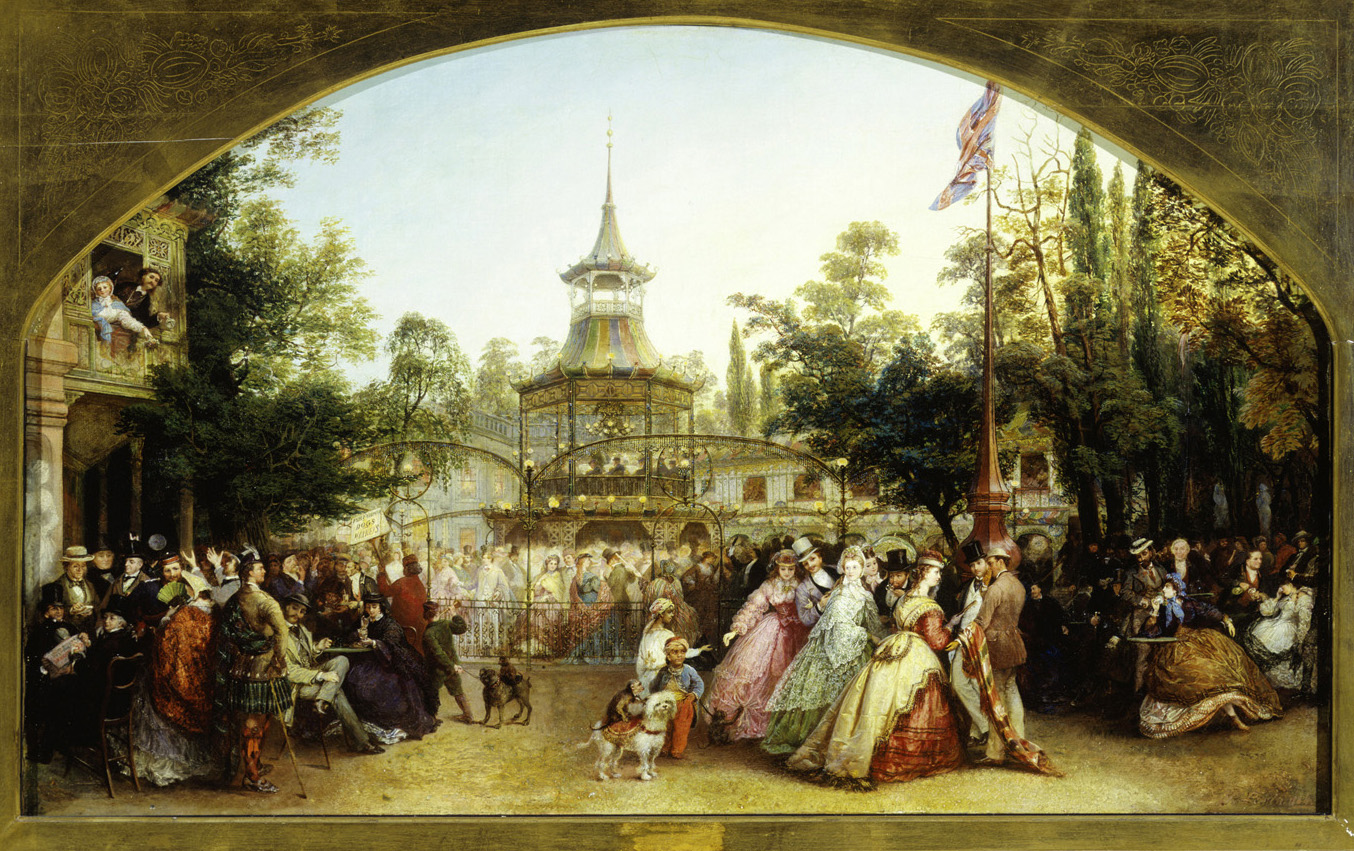 The polka, relatively easy to learn with a lively 2/4 beat, got the nation on its feet. Men, in particular, found it was perfectly possible to ‘jog along comfortably’, without being too fussy about the steps. The polka craze stimulated a novel development in the 1840s: London’s first year-round commercial nightclubs.

The first was Laurent’s Casino (meaning a place of entertainment, rather than a gambling den), which opened in October 1846 in the Adelaide Gallery off the Strand. The gallery was formerly a scientific exhibition hall, famous for its steam-powered machine gun, but was converted into a Louis XIV-themed ballroom with a 50-piece dance orchestra. The Casino was the brainchild of James Ellis, proprietor of Cremorne Gardens, and Émile Laurent, known to concert-goers as a virtuoso soloist on the fashionable new solo instrument, the cornet-à-piston. It was modelled on similar rooms in Paris, providing a winter retreat when outdoor venues were closed. Laurent directed the orchestra in flamboyant style, playing music by the likes of Musard, Strauss, Fessy and Labitzky. Entrance was a shilling. The public danced and drank, including a fashionable new American cocktail, the sherry cobbler (sherry, sugar and lemon, sipped through a straw).

The Casino proved incredibly popular and rivals soon appeared. Coleman’s Casino de Venise and Bal Ridotto, better known, more prosaically, as the Holborn Casino, opened in December 1846, in converted swimming baths. The Walhalla Salle de Valentino, formerly the Walhalla Theatre, followed in September 1848, situated in Leicester Square. Both were equally successful. Indeed, an unbiased observer might have concluded that this was the future of popular entertainment, not the humble pub music hall, which was still in its infancy. The term ‘casino’ was briefly adopted nationwide for any type of popular evening entertainment. Manchester’s Royal Casino Promenade Concert Hall (opened 1848), the Royal Casino in Sheffield (1849) and the Royal Casino in Leeds (1849) were principally music halls, but took their names from the glamorous new London venues.

The casino, however, did not prosper – or, at least, not in its original form. Magistrates were loath to licence such venues, associating them with prostitution. The Walhalla was prosecuted by West End theatre managers for lacking an entertainment licence and swiftly closed. Laurent’s was similarly targeted, only to open again as the Argyll Rooms in Great Windmill Street, backed by a West End bookmaker, Robert ‘Bob’ Bignell.

The Argyll Rooms, however, were a different proposition to Laurent’s original casino. They became, particularly after Laurent’s death in 1857, a haunt for Bignell’s Bohemian acquaintances, including louche aristocrats, who used the gallery as a place to meet prostitutes. Both the Argyll and the Holborn Casino gained a notorious reputation. George Hayman, an unremorseful clerk who stole funds from his employer, wrote to an acquaintance outlining his joyous week-long spending spree, including four trips to the Argyll Rooms:

took a box at the Oxford [music hall]; and had two or three ladies; made them all drunk with champagne. We all went to the Argyll Rooms and then to supper, all jolly and drunk. Tuesday, boosing all day.

Both venues finally closed in the 1870s, as moralists fought to clean up the West End.

But numerous venues for dancing remained. An 1880s report from a church missionary describes a shilling dancehall in Clerkenwell, gaudily decorated with gilt ornaments, wall mirrors and gaslights. A woman stands on the staircase, before a pair of baize-covered doors, to prevent the admission of prostitutes. The dance floor is surrounded by small booths with seating, although no alcoholic liquor is served, due to the difficulty of obtaining a licence. There is also a smoking room with easy chairs and a piano, ‘and it is not unusual to see women of the mechanic class in here smoking, as well as the men’. Such venues, catering to the upper-working-class and lower-middle, as a rule, attracted little notice; they were not racy West End haunts and caused no trouble. 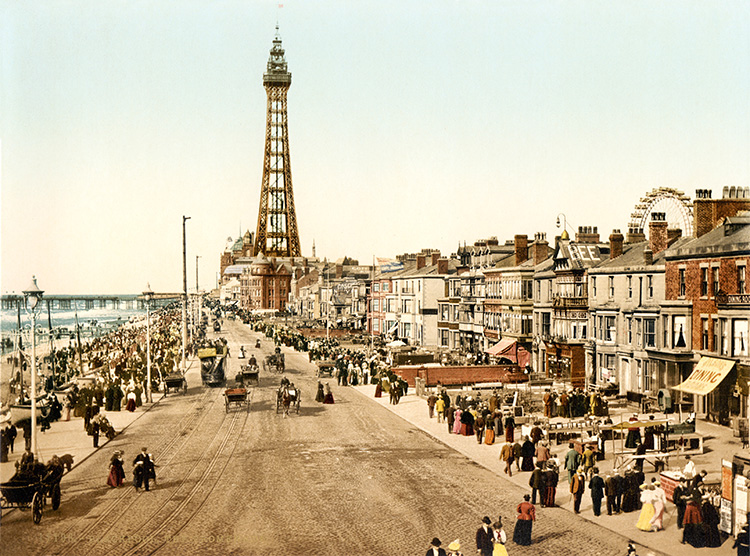 Similarly, new civic buildings often had a ballroom to provide public accommodation for dancing. Holborn Town Hall boasted ‘Cinderella Balls’ (finishing at midnight) every weekend. One contemporary account describes the female clientele as waitresses and shop girls, keen to fill up their dance-cards (and, of course, meet potential husbands). Equally respectable were the conservatory ‘dancing palaces’ of the Isle of Man, which prospered in the 1880s and 1890s. The Castle Mona in tourist-filled Douglas boasted a galleried conservatory capable of hosting more than 1,000 couples. Blackpool, a rival resort, built its own grand ballrooms in the Tower and Winter Gardens to compete.

Dancing would only really become big business in the 20th century with the coming of the jazz age. But the Victorians danced, whether in the pub, the casino or the dancing palace.

Lee Jackson is the author of Palaces of Pleasure: From Music Hall to Seaside to Football, How the Victorians Invented Mass Entertainment (Yale, 2019).