In the late 1800s, a new church promised to reshape human bodies into a redeemed race, transcending biology and ethnicity. Inhabitants of the dirty, sick slums of the world’s recently industrialised cities were increasingly drawn to the call of Zion. 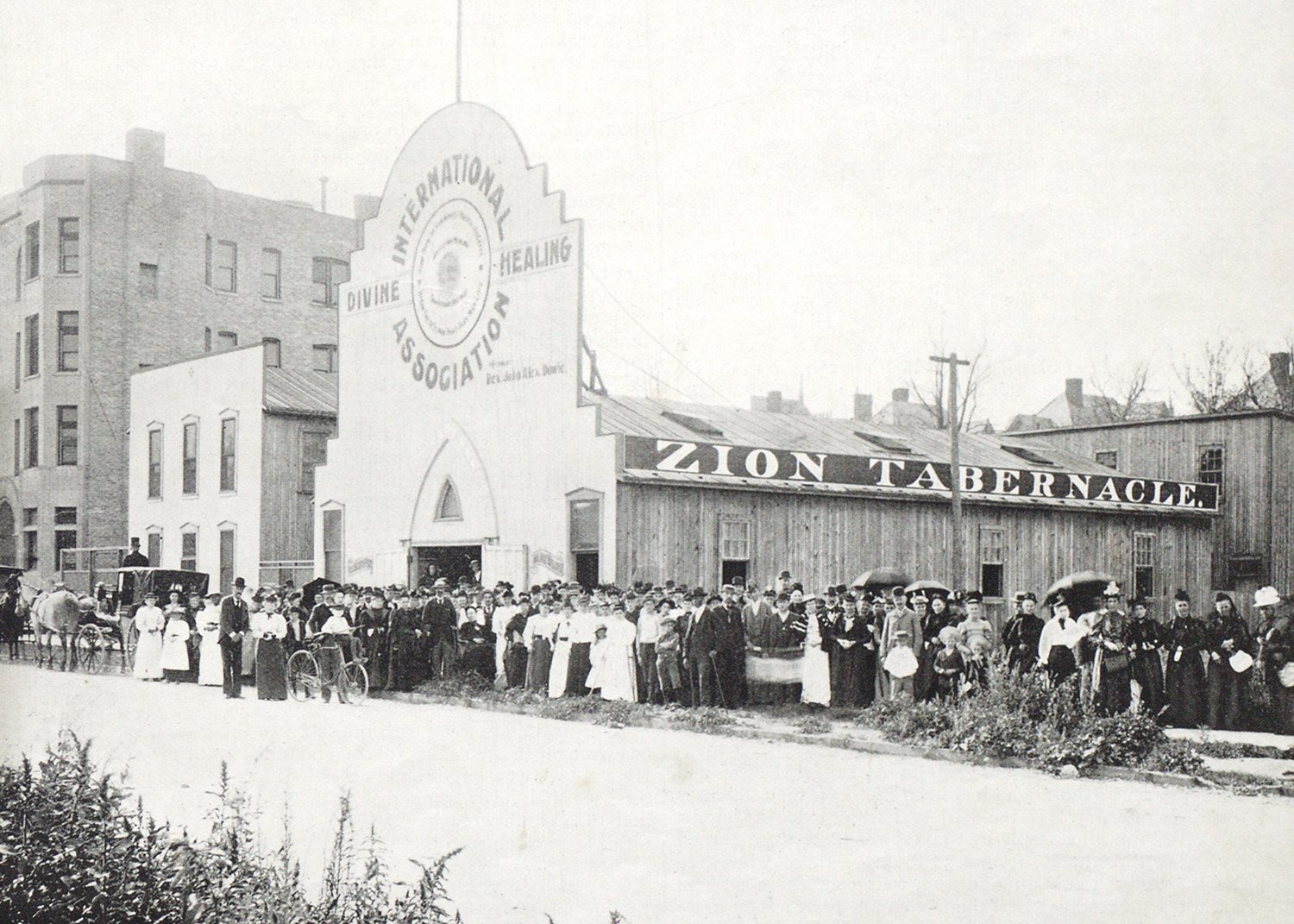 Looking up the rickety stairs of the run-down building on Melbourne’s Pitt Street, Mrs Spinks was deeply afraid. She had been suffering near-uncontrollable vaginal bleeding for months, accompanied by dizzyingly painful cramps in her stomach. She had consulted a number of Melbourne’s physicians – including the notorious Dr James Beaney, whom Melbourne society whispered had murdered a bar-maid when he had operated upon her blind-drunk – but none of these eminent male physicians had been able to help her. They had only prodded her painfully with terrifying metal implements and recommended grizzly sounding surgeries. She was left penniless and hopeless.

At the end of her tether (she had consulted – unsuccessfully – a mesmerist who boasted he could heal her through the power of electricity), Mrs Spinks had unexpectedly received a recommendation from her neighbour in the cramped building she lived in in Collingwood – one of Melbourne’s new urban slums – who swore by a marvellous new ‘faith-healing’ doctor. All of Collingwood was supposedly now seeing ‘the Dr Alexander Dowie’, a charismatic Scot who had left the Presbyterian church to found his own ‘Free Christian Tabernacle’. Any Sunday, and on several evenings during the week, shabbily dressed invalids could be seen pouring into the Tabernacle on Pitt Street in order to experience what the tabloids breathlessly recounted: the electrifying experience of Dowie or his wife, Jane, laying hands on them and praying for their bodily healing in the name of ‘Zion’, or the coming Kingdom of God.

This is the story of the international success of John Alexander Dowie’s faith-healing church among the working-class residents of the newly industrialised cities of the late 19th-century. While Zionism is almost always connected to Jewish promotion of the state of Israel, the experience of individuals such as Mrs Spinks underscores that ‘Zion’ could hold an entirely different meaning for urban Protestants of 100 or so years ago. By the turn of the last century, about 20,000 working-class women and men in worldwide urban centres such as Melbourne, Chicago and Johannesburg had discovered Zionism as a form of highly embodied, profoundly physical Christianity that offered powerful redemption for diseased bodies and their frequently difficult experience of city-living. 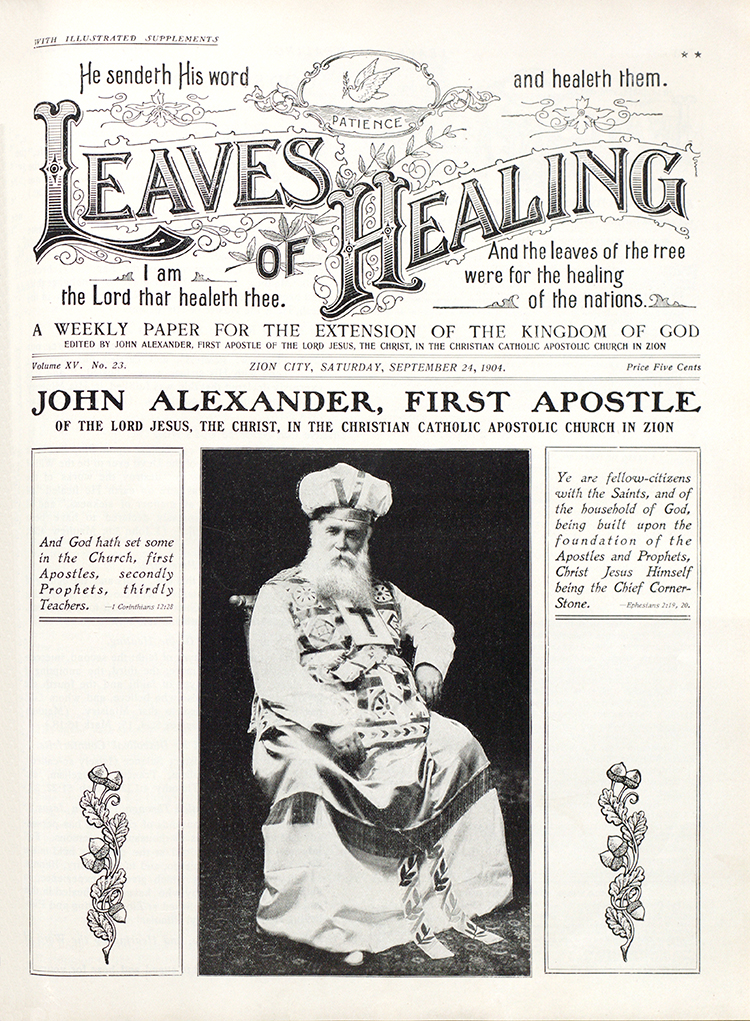 Melbourne – only declared a city in 1847 – had seen new slums sprout up almost overnight, over-crowded and with lamentable sanitation. Disease was a fact of life and Melbourne’s churches and philanthropic associations were vocal in their sanctimonious ‘poor-shaming’ recommendations about what would restore the working poor’s health: abstention from drink and saloons, better hygiene and, above all, increased attendance at church. Dowie, however, founded one of a small group of religious organisations which positioned themselves as more populist alternatives for the city’s working poor. Along with the rambunctious Salvation Army and its infamous street processions, Dowie’s church was part of a broader interest in so-called ‘divine healing’ among late 19th-century Protestants, aimed at saving the body as well as the soul, and specifically responding to contemporary anxieties regarding the perceived unhealthy effects of city life.

But by 1882, Dowie and his wife, accompanied by their two children, had set sail from Melbourne for San Francisco. In common with other Protestant divine healers, Dowie was inspired by missionary zeal; his ultimate goal was broader then merely establishing his movement in Australia and he sought to establish a chain of ‘Divine Healing Associations’ throughout the world. After a brief sojourn in San Francisco (the hostility of the established churches drove him away) Dowie and his family settled in Chicago in 1892. In large part, their move was motivated by the city’s status as the home of the World’s Fair. Along with hundreds of Protestant clergymen who flocked to the city in search of souls among the visitors to the Fair, Dowie decided that the occasion offered an unmissable opportunity for divine healing to take root in the Midwest and North America. Unable to afford an actual site in the Fair, Dowie established the ‘Zion Tabernacle’ in a rickety wooden structure on the Fair’s perimeter, opposite Buffalo Bill’s ‘Wild West Show’. One of his most famous successes was healing Buffalo Bill’s niece, Sadie Cody, who visited the Zion Tabernacle and whose positive publicity in the Chicago Tribune attracted thousands of visitors.

Riding this subsequent wave of success, Dowie’s newly named Christian Catholic Apostolic Church in Zion (‘Catholic’ suggested his interest in an ecumenical church that transcended petty denominational difference, while ‘Apostolic’ underscored his desire to hearken back to the faith-healing days of the early Christian Apostles) became spectacularly popular among Chicago’s working-class. Moreover, by the 1890s, Chicago had earned the distinction of being only second to New York City as a hub for labour migration. Its extensive European immigrant populations along with its sizable African-American community made it one of the most cosmopolitan cities in the world. 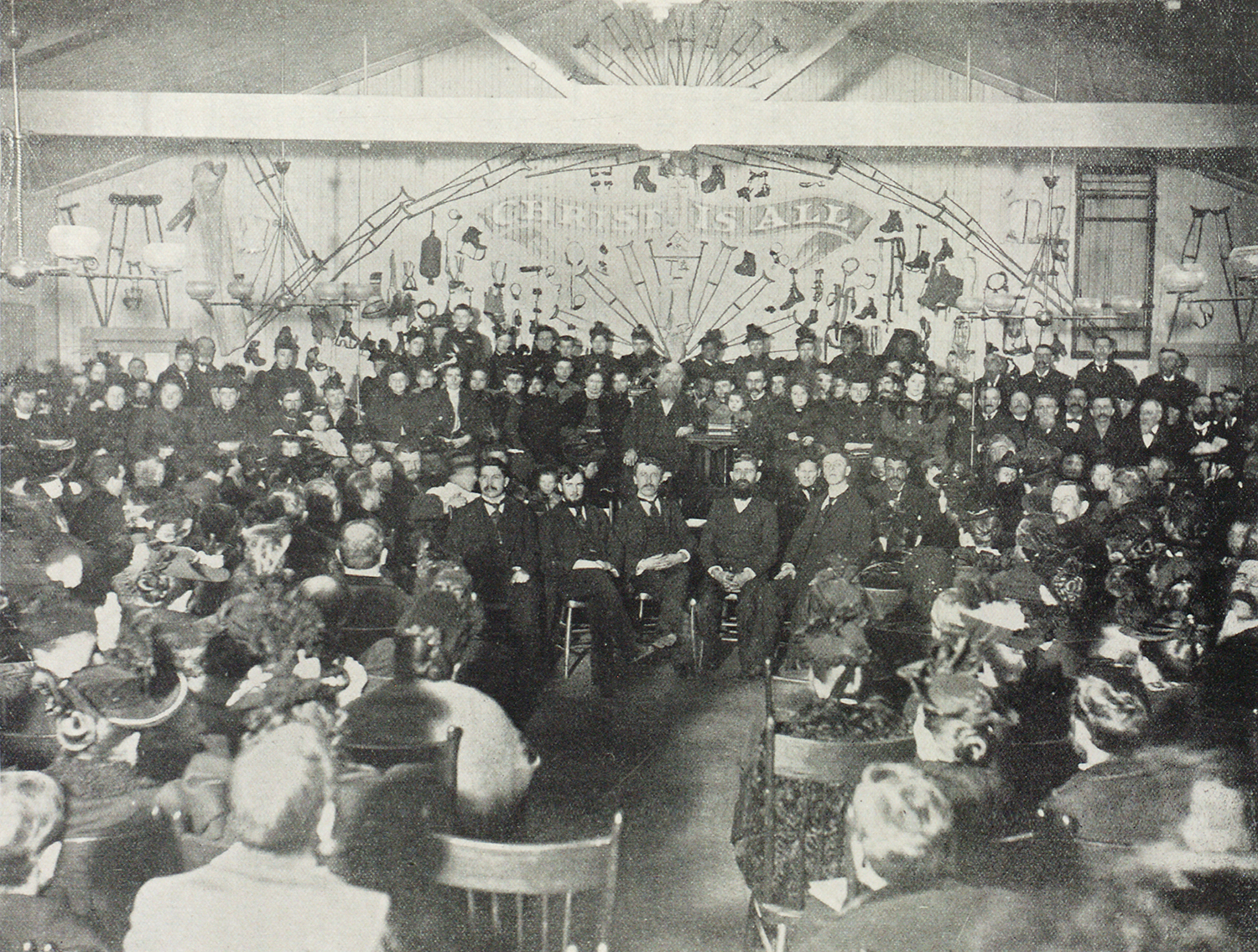 Chicago – with its diverse, polyglot population – offered a new opportunity for Dowie to forge a particular aspect of his message that had been absent in Melbourne. This was the idea that not only did faith healing promise to uplift conditions of the urban poor, but it also offered a way for largely disenfranchised new immigrants to the cities of North America (as Dowie was) to imagine themselves as members of a new cosmopolitan breed of humanity. Working-class Zionists – renouncing doctors and drugs in favour of prayer – would be marked by Christian piety, healthy bodies and temperate lifestyles and were unconstrained by language, ethnicity or race.

By 1900, Dowie had raised enough funds from supporters to buy property 40 miles north of Chicago, on the shores of Lake Michigan. There, he started a utopian experiment in holy living. Dubbed ‘Zion City’, this would be the headquarters of the church, from whose precincts drugs, doctors, alcohol and tobacco were banned. Reflecting the cosmopolitan ethos of the church, Zion City was proclaimed as a ‘home for all nations’ and over 70 nationalities lived there, including numerous African-Americans holding senior positions in the church and marked by an unprecedented degree of interaction with Zionists of all nationalities and races.

Dowie’s ambition was to start a string of Zion Cities throughout the world and, to this end, the church sent missionaries to China, Japan, Mexico, India, Australia and New Zealand. But it was in the South African territory of the Transvaal, in the new gold mining metropolis of Johannesburg (only about 15 years old at this time), that the Zion Church would be most successful. The conditions of Johannesburg were not, after all, so different from those of other new industrialising cities. Like Melbourne and Chicago, Johannesburg’s new working population worried about the deleterious effects of city-living: silicosis from inhaling dust particles from the mines and devastating injuries due to rock-fall and other mishaps were common.

As had been the case with Chicago, Johannesburg acted as a cosmopolitan labour hub, drawing in miners from all corners of the world, including from across the British Empire. Jobbing miners from the tin mines in Cornwall and gold mines in California and Australia all flocked to Johannesburg, as did African labourers from across southern Africa, including from Portuguese East Africa (today Mozambique) and Nyasaland (Malawi). The new Zion Tabernacle in downtown Johannesburg became notorious in the press for its racially and ethnically mixed faith-healing services. It was particularly so in the wake of the South African War (1899-1902), a devastating conflict fought between Boer and Briton for control of Johannesburg’s gold, that Dowie’s cosmopolitan message of reconciliation between the races had particular resonance. Zion healing services often became the site for tearful statements of reconciliation between the two formerly warring white ‘races’.

Nonetheless, despite its early success among the city’s white population, Zionism’s most notable popularity lay with Johannesburg’s African community. The church’s promise to reshape human bodies into a new redeemed race, transcending markers of biology and ethnicity, was especially appealing to South Africa’s black citizens struggling with increasing territorial dispossession and political disenfranchisement. As Johannesburg’s municipal authorities began to create a city hospitable to its white residents and dehumanising for those of colour, Zionist faith healing became a platform for a more equitable humanity. Over the following decades, Johannesburg’s place as a magnet for African labourers from across southern Africa helped transform Zionism into a church with continent-wide reach and millions of members. Today there are an estimated 15 million southern Africans who belong to one or another Zionist church, all of which trace their origins to Dowie’s original Zion Tabernacle on the perimeter of the Chicago World Fair of 1892. 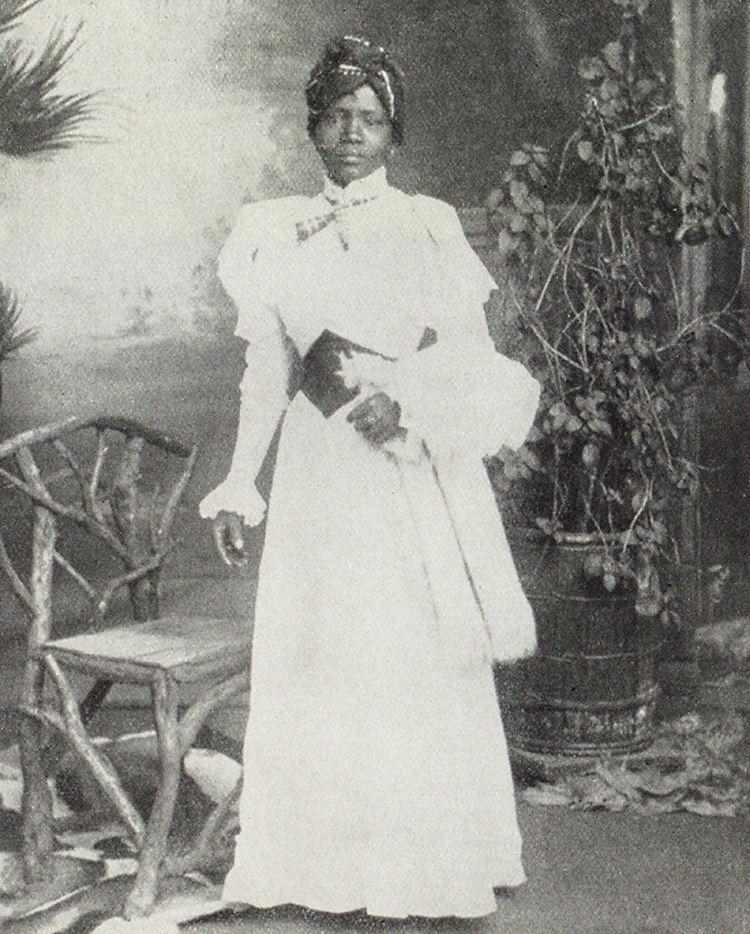 In Johannesburg, another young working-class woman was drawn to Dowie’s Zion Church, who also suffered – as did Mrs Spinks - from what she delicately put as ‘female trouble’. Meta Budalwako was a young South African woman in domestic service to a white employer in the early years of the new century. She was part of the small class of educated Christian Africans who were finding themselves progressively disenfranchised by the increasingly racist legislation of postwar Apartheid South Africa. Budulwako was astounded when her white employer – already a Zionist – laid hands on her in a startlingly progressive act of physical proximity as she prayed for Budalwako’s healing, a move that exemplified the counter-cultural multiracial ethos of Dowie’s church. Her family vigorously opposed her conversion, but so impressed was she by Dowie’s Zion that Budulwako persisted. Her testimony, published and circulated worldwide in 1908 in Dowie’s international divine healing magazine, stated: ‘I am determined by the grace of God to be true to Zion, no matter what others may say or do.’

Joel Cabrita is the author of The People’s Zion: Southern Africa, the United States, and a Transatlantic Faith-Healing Movement (Harvard, 2018).