Ireland, Back to the Future

In medieval Ireland divorce, contraception and abortions were readily available. The country’s recent political and cultural changes take it much closer to its pre-modern past. 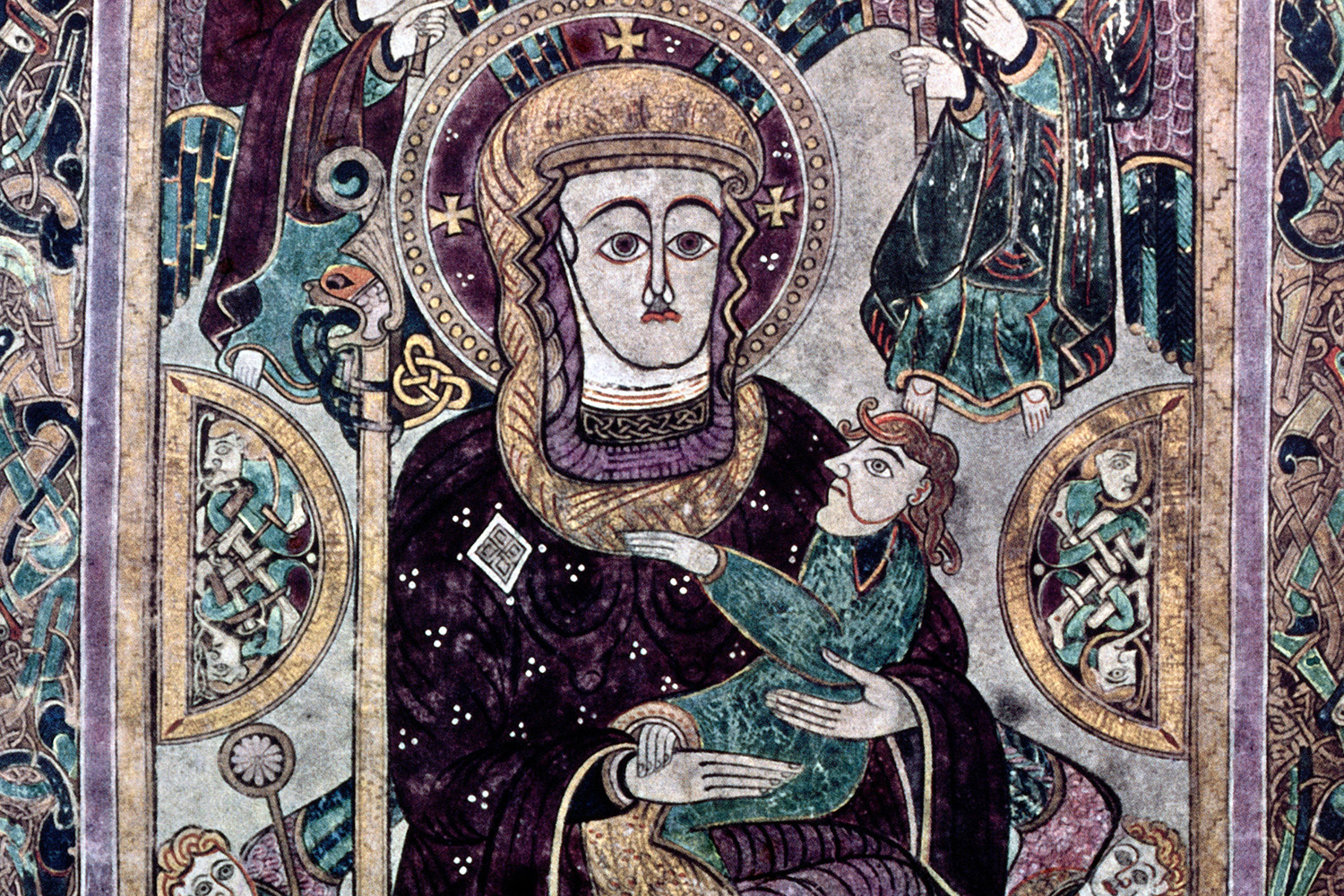 The Virgin and Child depicted in the Book of Kells, 9th century.

On 26 May 2018, after a divisive nationwide referendum, Ireland voted to repeal the Eighth Amendment to its constitution, legalising abortions. The increasing secularisation of Irish society has been rapid and, for anyone who grew up there, astonishing. Just 30 years ago there was no divorce in Ireland. Homosexual sex was illegal, as were contraceptives. Any woman who sought an abortion had to travel outside the state. Ireland was a bastion of intensely restrictive Catholic teaching enshrined within its Constitution, which was established under heavy Church influence in 1937. Father John Charles McQuaid, future archbishop of Dublin, was involved in the formulation of the articles dealing with personal rights, the family, education, private property, religion and the principles of social policy. The Church’s hold on the state was, it seemed, unbreakable.

The reasons for the subsequent demise of Catholic power in Ireland are many. Prominent, though, is the increasingly affluent, sophisticated, well-travelled (including returning emigrants) and well-educated urban populace, who are unwilling to adhere to the diktats of a theocracy which has been enfeebled by numerous high-profile scandals over the last 30 years. The waning influence of the Church might be lamented by the country’s religious conservatives, but this is no new dawn for Ireland. The Irish have been here before, ignoring the teachings of Rome and making legal provision for the complex needs of the many. 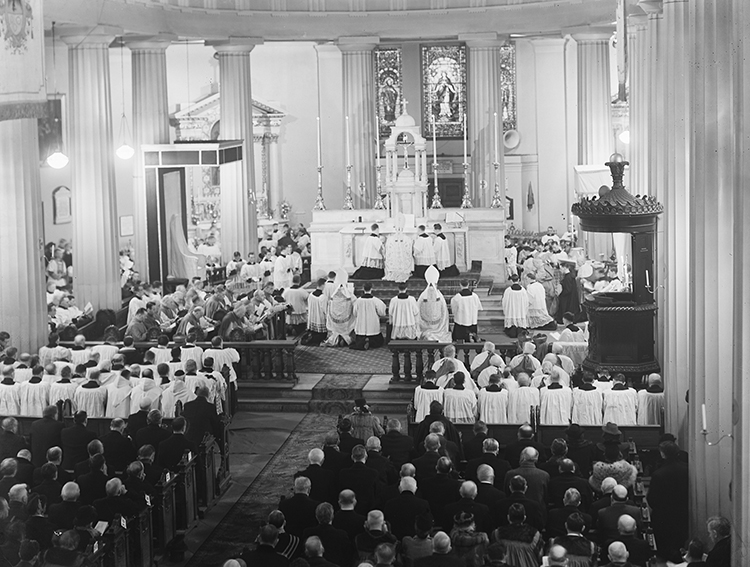 For much of Irish history – from the period when we first encounter written sources in the early medieval era, through to the early modern period – the Church played a relatively minor role in people’s day-to-day lives. In medieval Ireland, marriage was, largely, a secular event both for those living in culturally English as well as Gaelic areas. In many cases neither blessing nor any priestly intervention was needed in order to legitimise a marriage. The Church’s hold on marriage was always far stronger in Anglo-Irish controlled areas than in Gaelic ones – and its influence on Gaelic areas increased as the Middle Ages wore on – but the modern idea of a church wedding conducted by a priest was not the reality for most people. Indeed, within areas adhering to Gaelic Irish legal norms, a contract was drawn up between couples and their families, a party was held to celebrate the union and, if it did not work out, a divorce could be obtained according to the Gaelic legal codes which governed such matters.

The legal tradition of medieval Ireland is immensely impressive. It is the largest corpus of legal texts extant in Europe before the 12th century and its laws show a sophisticated understanding and a willingness to address complex relationships. Among the early texts is the eighth-century law tract, Cáin Lánamna (The Law of Married Couples). Marriage was loosely defined – by this text alone a man could have several types of wife. A woman held differing status depending on whether she was a primary wife of equal status to her husband, a wife of lower status, of higher status, a concubine, or involved in a more casual union. Her status also depended on whether she had sons or not. Concubines figured in the lives of many men and may have been maintained in addition to a wife.

Though the influence of the Church and exposure to attitudes to marriage imported by English colonisers may have affected Gaelic marriage practice, the recognition of different types of relationship was legally enshrined, as was an allowance for ending such relationships. A man could obtain a divorce on various grounds: if his wife persisted in adultery; if she neglected her household chores, or if she killed her children. Irish women could divorce their husbands if they were physically abusive; if they gossiped about their sex lives; if they had concealed their impotency; if they were too fat to satisfy their wives sexually, or if they were homosexual. 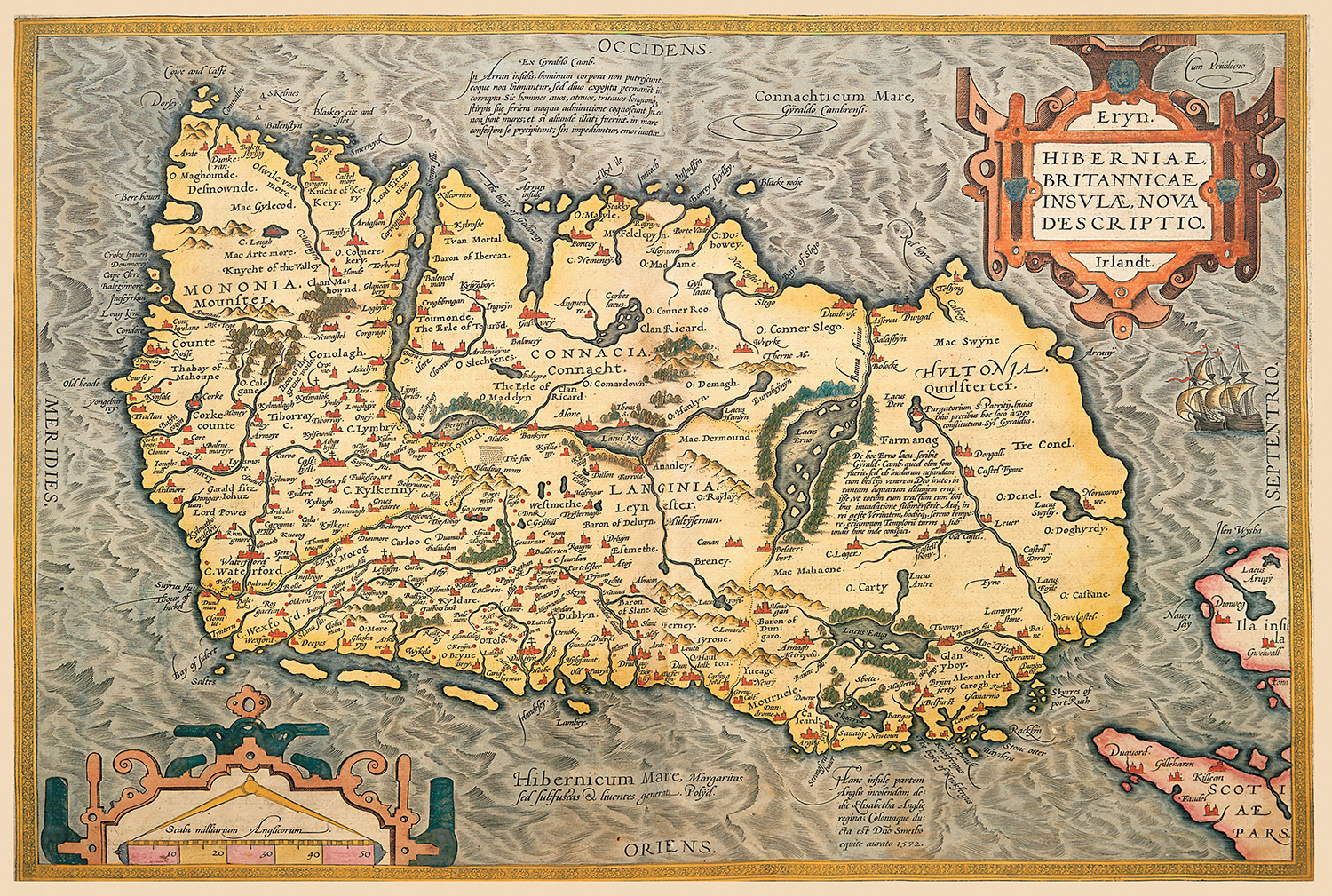 The idea of family was thus dynamic and prone to change. In addition to engaging in multiple marriages and divorcing at will, the widespread use of fosterage meant that people could belong to much bigger family units than a nuclear one. Children could have parents who had been divorced. There were stepchildren, foster children, children born to concubines and raised in a wife’s household, children raised in religious establishments (perhaps raised by many mothers) and so on. The Irish jurists saw that all such situations had to be legislated for and thus produced a complex body of law on familial relationships and how to navigate them. Irish law, for example, drew little distinction in matters of inheritance between the children of men’s wives and their betrothed concubines.

Multiple marriages, casual sexual encounters and divorce at will were not uncommon. Turlough an fhiona O’ Donnell, Lord of Tirconnel, who died in 1423, had 18 sons by ten different women and 59 grandsons. Philip Maguire, Lord of Fermanagh, who died in 1395, had 20 sons by eight mothers and at least 50 grandsons. Moreover, many Irish churchmen were not in any rush to bring Irish marital practice in line with other western countries. They were often involved in relationships with women themselves. These women were classed as priests’ concubines by the authorities and were treated legally as wives.

Acceptance of unorthodox relationships conducted outside of the bonds of a formal marriage is once again being seen in Ireland. According to the Central Statistics Office, until 1980, children conceived outside marriage accounted for less than five per cent of all births. During the 1980s and 1990s, however, the percentage increased rapidly, reaching a figure of 31.1 per cent by 1999. By 2016 almost 4 in 10 births were to an unmarried woman in Ireland. The massive social changes of the last 30 years in Ireland again echo the past.

This is true, too, of birth control, the issue that has recently polarised the country. Medieval Irish women were familiar with the use of abortifacients and tried to control the consequences of their fertility. The roots of lay and clerical anti-abortionism appear to be modern. Medieval sources reveal a country in which the clergy considered abortion a less severe offence than that of engaging in oral sex for example, or so the eighth century Old Irish Penitential – an ecclesiastical text outling the appropriate guidelines for penance – indicates.

Indeed, the medieval Irish clerics’ attitude to abortion was nuanced and more akin, perhaps, to those today whose Catholicism allows for an element of choice in these matters. The Penitential of Finnian, written around 591, reveals the punishment for women who abort:

If a woman by her magic destroys the child she has conceived of somebody, she shall do penance for half a year with an allowance of bread and water.

The mention of this in the Penitential indicates that abortion was common enough that it warranted a set punishment. Far from being a taboo subject, it was among the commonplace societal behaviours that needed addressing by the clerics. 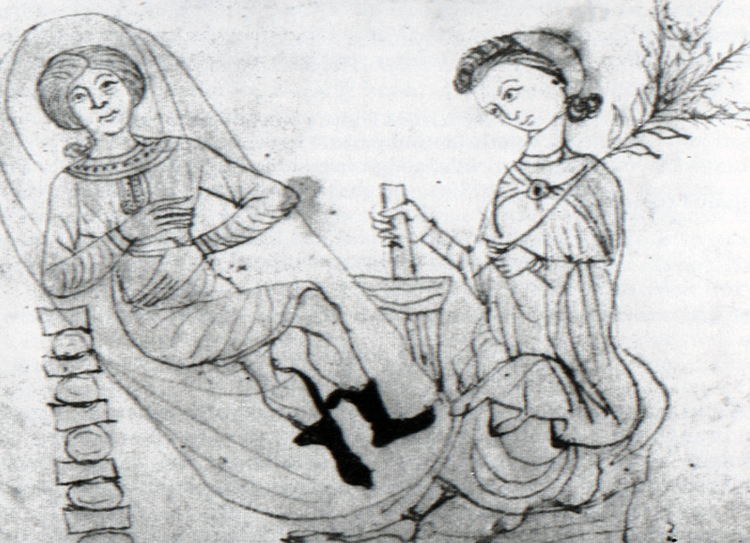 References to abortion are found not only in the penitentials but also in literature, particularly in the hagiographical saints' Lives which emerged in Ireland during the seventh and eighth centuries. These documents reveal saints who colluded in abortion. Ireland has four saints who are recorded as openly and miraculously carrying out abortions: Ciarán of Saigir, Áed mac Bricc, Cainneach of Aghaboe and Brigid of Kildare. The life of Saint Ciarán (ninth century) tells the story of a young virgin, Bruinech, who was kidnapped and raped by King Dimma and became pregnant. Bruinech appealed to Saint Ciarán, who miraculously aborted the fetus. Later versions of this Life told of Ciarán making the fetus disappear rather than aborting it. Áed blessed a nun who was pregnant and the fetus disappeared, as did Cainneach. Brigid was the only female saint reputed to carry out abortions. These Lives aimed to show the power of saintly chastity to intervene in earthly matters and are in no way a pro-choice statement. Still, they perpetuate an important motif in medieval literature that portrays abortion as a miraculous but also practical act.

This tradition of Irish people who practised abortion, used primitive forms of contraception and easily accessed divorce was brought to an end during the 16th and 17th centuries, as Gaelic culture receded in the face of English colonisation. The push by Tudor and Stuart monarchs to bring the culturally and religiously fractured Irish kingdom under the unified overlordship of a hardline Protestant English state resulted in genocidal acts, mass dispossessions and unending warfare across the country. Gradually, as the layered and complex medieval society was brutally repressed, the relaxed attitude of the Irish to the Church’s teachings was replaced by a much stricter, Counter-Reformation approach, in part as a reaction to the identification of Englishness with Protestantism.

Succeeding centuries saw Irishness become a byword for strict adherence to Catholic teachings, reaching its apogee with the creation of the modern Irish state in 1922, whose Constitution, when it reached its final form in 1937, embodied conservative Catholic teaching on social matters. This was further solidified when the Eighth Amendment was passed in 1983. Abortion had been illegal in Ireland since 1861 but, in 1983, anti-abortion campaigners sought to deny the possibility of a judicial ruling in favour of abortion by introducing an amendment which gave the unborn equal right to life as the mother. The myth of an Irish past in which divorce and abortion were taboo gradually became fixed. That is not to say that medieval Irish society was based on principles of equality and social justice: like all medieval societies it was founded on inequality and the benefits of status. However, its jurists were clear-eyed about the sort of laws it required and dutifully produced them. Its clerics were also practical men and provided guidance on the sins of the day. A picture emerges of a society able to legislate for its people in all their needs and wants. 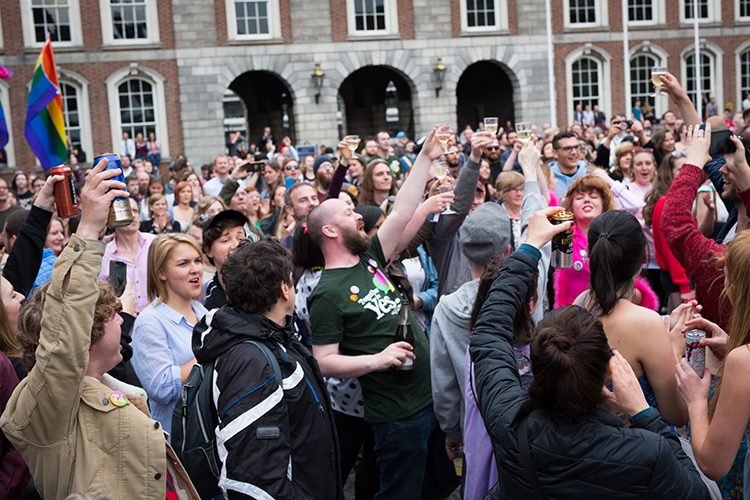 Now, once more, the Irish are legislating for all. Of course, one cannot directly contrast one set of historical circumstances with another, but it is hard not to muse on how much more at ease Irish people of the pre-modern period would be in the Ireland of 2018, where the Church’s power has waned, than they would have been in the more restricted Ireland of even 30 years ago. Ireland's Counter-Reformation Catholicism, built on an identity forged in oppression, which morphed into a nationalism centred on purity, has disappeared. The benign ignoring of a Church whose social teachings seem increasingly irrelevant to the Irish has gathered speed and contains profound echoes of a history that has been ignored for far too long. Ireland has finally caught up with its past. As the contemporary Irish author Anne Enright has written: ‘People do not change, they are merely revealed.’

Gillian Kenny is Research Associate at the Centre for Gender and Women’s Studies at Trinity College Dublin.