The concept of ‘Melanesia’ begins with an 18th-century European theory: that the indigenous populations of the Pacific islands, now called Papua New Guinea, Vanuatu, New Caledonia, Solomon Islands and Fiji, had darker skin and were thus a different race than the inhabitants of the islands grouped as Micronesia (‘small islands’) and Polynesia (‘many islands’). The anthropologist Paul Sillitoe describes Melanesia (‘black islands’) as a ‘historical category’ which, though subject to arbitrary boundaries (Australia is sometimes included, Fiji is sometimes not), has become legitimised by use. The Papuan philosopher and member of the Melanesian Alliance Party, Bernard Narokobi, wrote that, though Melanesian history lacks ‘the binding effect of the written word’ or ‘the naked power of the gun’ (a reference to centuries of foreign intervention reflected in the western gaze of many of the following images), a ‘common cultural and spiritual community’ does exist. 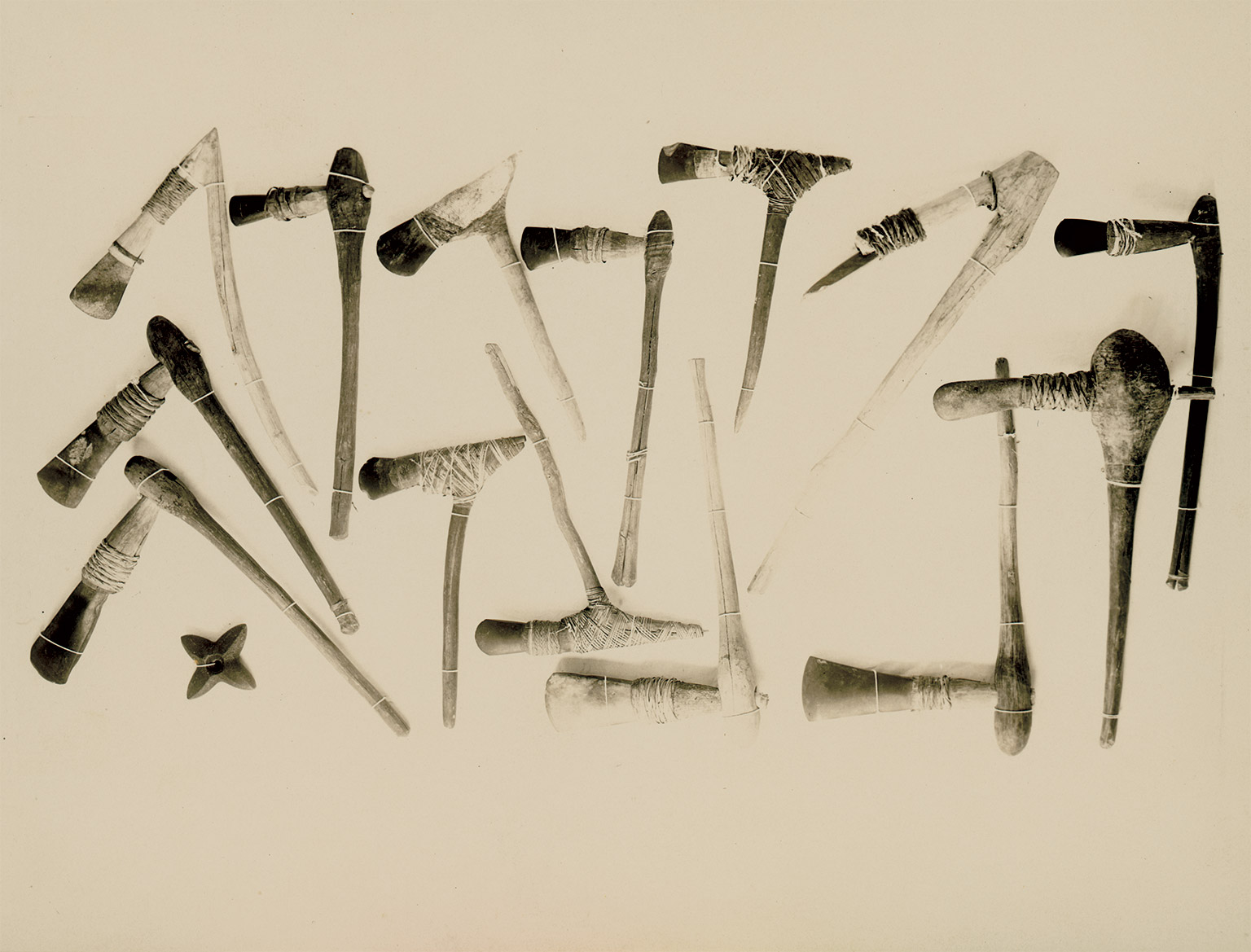 In 1959, a group of French documentary filmmakers arrived on ‘an island where men still live in the Stone Age’. Like various explorers before them, the makers of The Sky Above, The Mud Below found that the past can be a foreign country in an almost literal sense. Across Melanesia, stone tools were still used in the 20th century, which, coupled with the region’s lack of organisation into the type of nations found in Polynesia, led to judgments of barbarity. Yet the region was among the first to develop agriculture. 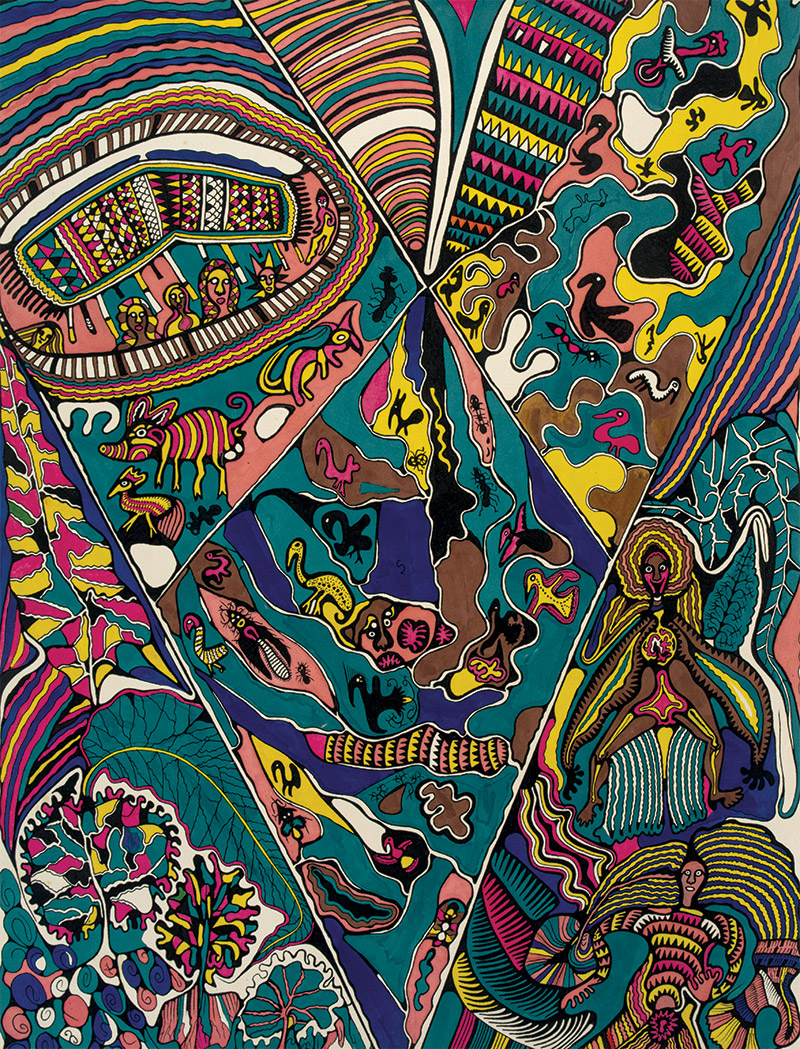 Melanesians may, as Sillitoe puts it, have ‘a certain ill-defined sameness’, but language is not the glue that binds: over 1,300 languages are spoken in the region, not including dialects. Papua New Guinea is considered the most linguistically diverse country in the world. Many of its more than 850 languages are creole: Unserdeutch (‘our German’), for example. This work by the Papuan artist Cecil King Wungi reflects this complexity. 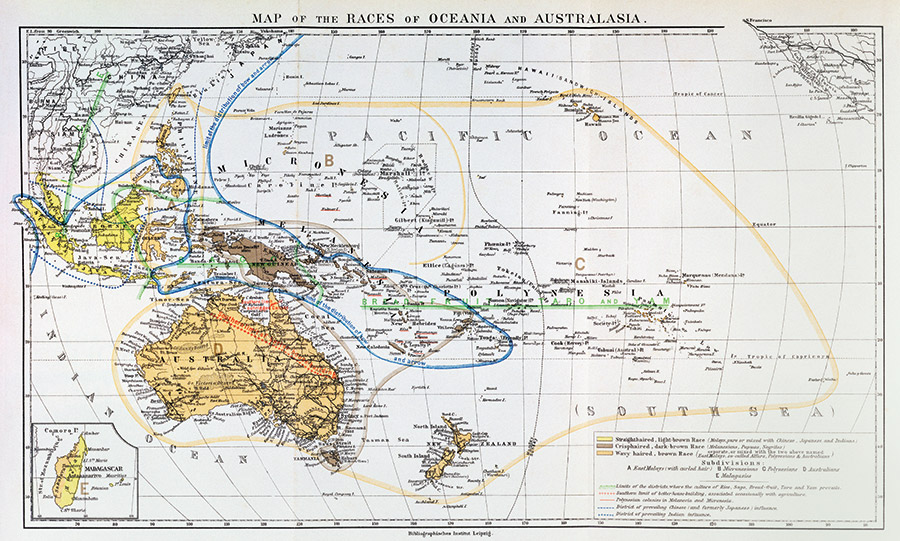 Here, the Pacific islands are divided into broad, race-based subregions, which gloss over the minutiae of cultural and linguistic diversity. Previously, ‘Polynesia’, coined by the French scholar Charles de Brosses in 1756, was applied to all the Pacific islands. Another Frenchman, Jules Dumont d’Urville, first used ‘Melanesia’ in 1832. As the anthropologist Serge Tcherkézoff neatly puts it: ‘The history of contrast between Polynesia and Melanesia is the history of European ideas about “skin colours” between the 16th and 19th centuries.’ On this map the Melanesian islands are coloured brown, indicating a ‘crisphaired, dark-brown race’. 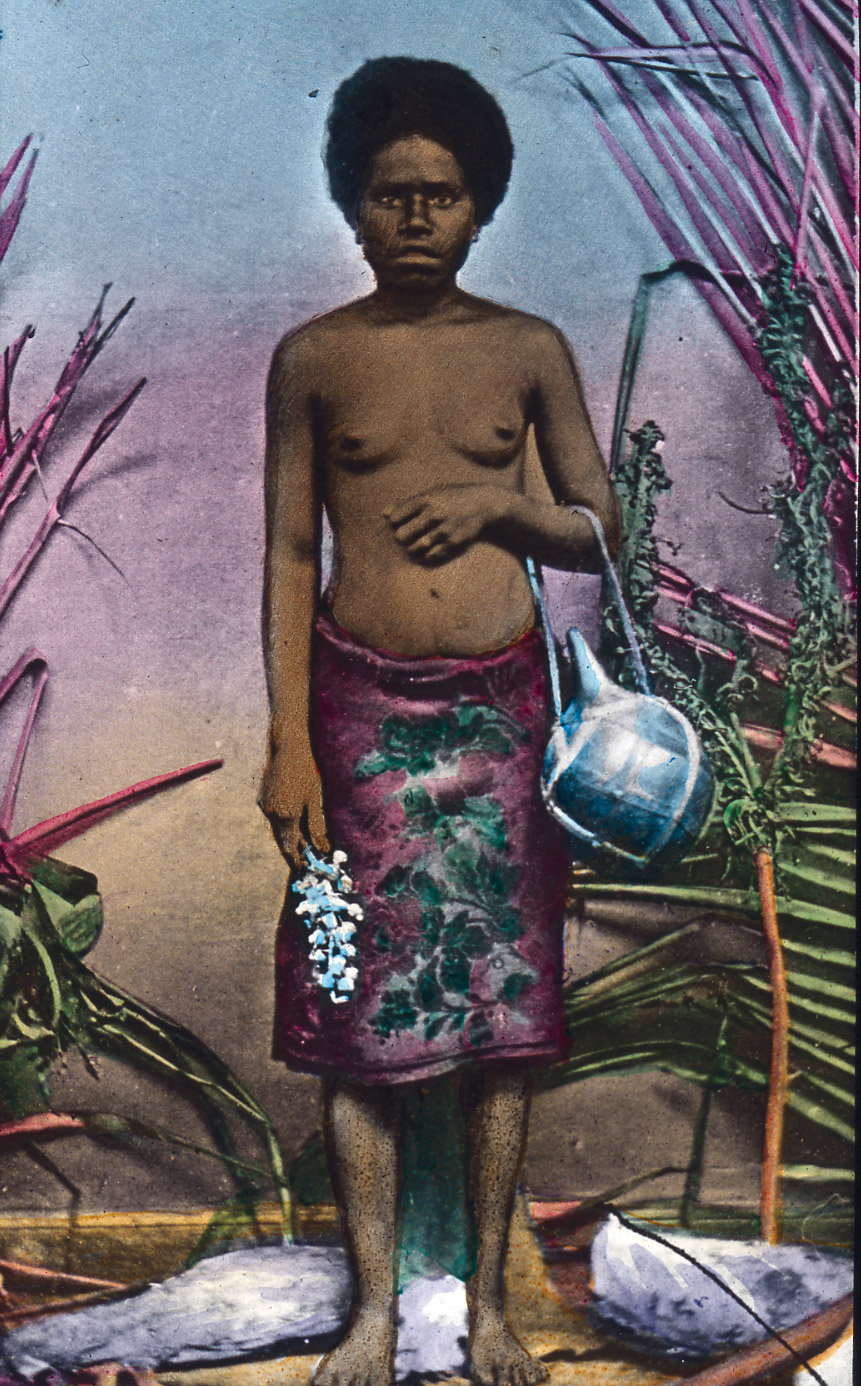 Ideas of racial superiority were inherent in the division between Melanesia and Polynesia. Light-skinned Polynesians were considered more civilised and attractive than the darker Melanesians (described as ‘frizzy blacks’ by de Brosses), furthering an enduring tradition of European romanticisation of Polynesia (in Paul Gauguin’s Tahiti paintings, for example). The Melanesian islands were also ranked according to their perceived similarity to Polynesia, with Fiji often preferred due to its history of contact with Tonga. 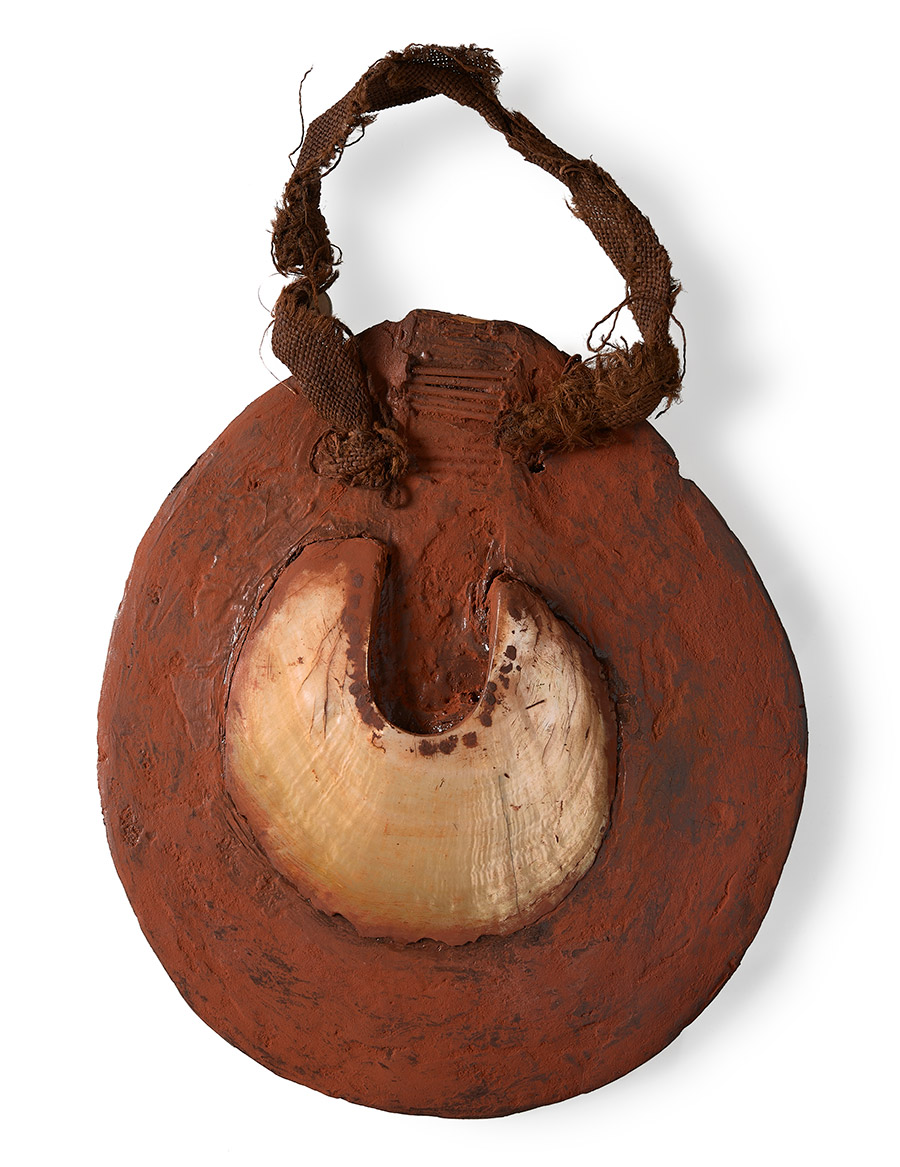 An oyster shell, or kin in the Melpa language spoken in the Western Highlands of Papua New Guinea, is mounted on resin coloured with red ochre. Like the tabua – the polished teeth of sperm whales found in Fiji – kin are an important currency used in trade and diplomacy. Writing in The Melanesian Way in the 1980s, Bernard Narokobi cited ‘intricate trade links’ as proof that Melanesians were ‘moving together long before Western contact’. 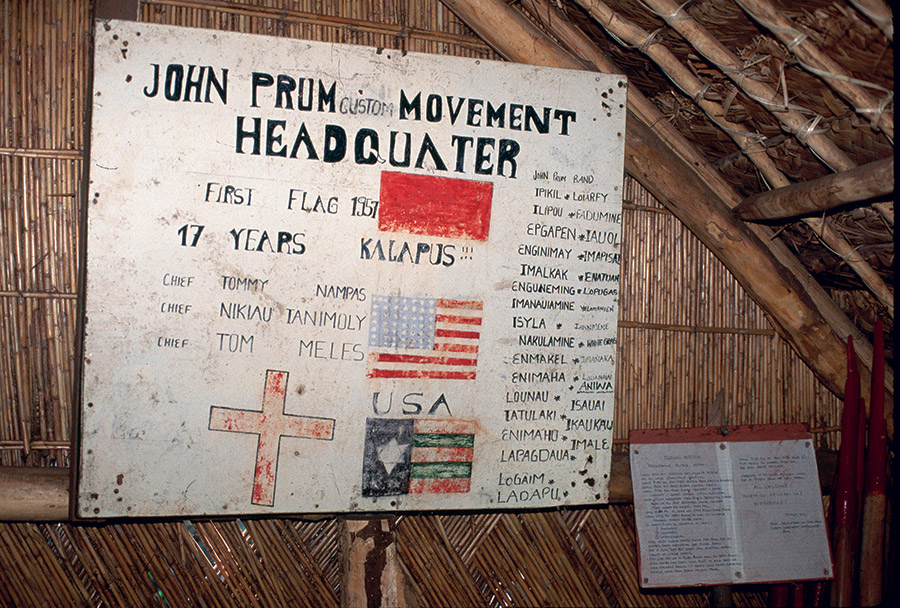 An unexpected consequence of western contact, Melanesia’s ‘cargo cults’ are a form of religion unique to the region. Noticing that westerners regularly received shipments of cargo, a belief emerged among the islanders that performing certain rituals, such as building a runway, would also yield such riches. The exact origins of the cargo cult phenomenon are unclear, but they became well known after the Second World War. Among the most famous cults is the still active ‘John Frum’ cult in Vanuatu. The name possibly derives from a US GI stationed on the island during the war (e.g. ‘John from Texas’). Members of the cult believe that goods meant for them, intercepted by the Americans, will one day be returned. 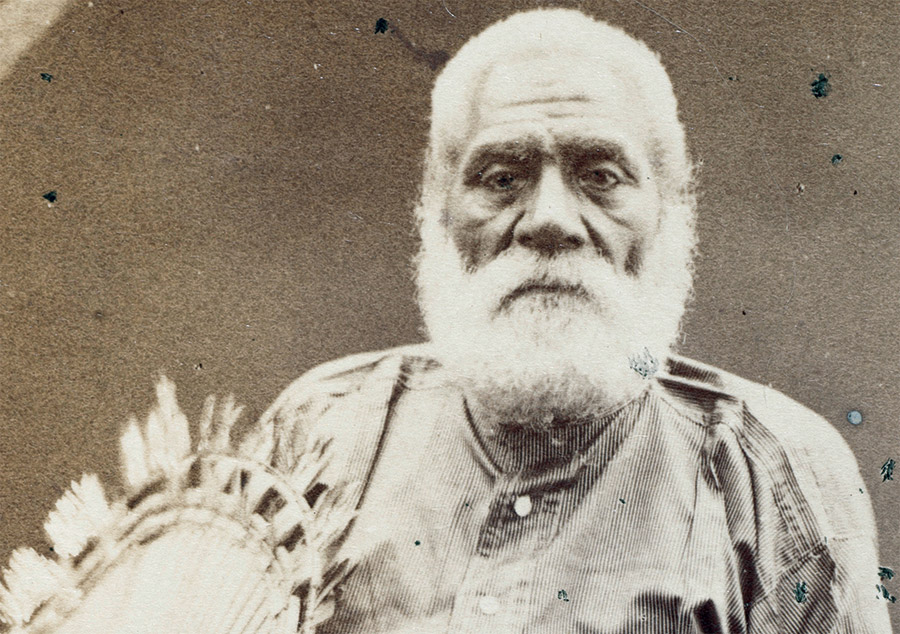 A portrait of Seru Epenisa Cakobau, king of the first united kingdom of Fiji (1871-74). Cakobau (1815-83) was a cannibal warlord who declared war on Christians before converting in 1854. Beset by problems, Cakobau repeatedly asked the British to establish Fiji as a colony. Britain agreed in 1874 having previously thought Fiji too isolated to warrant colonisation. 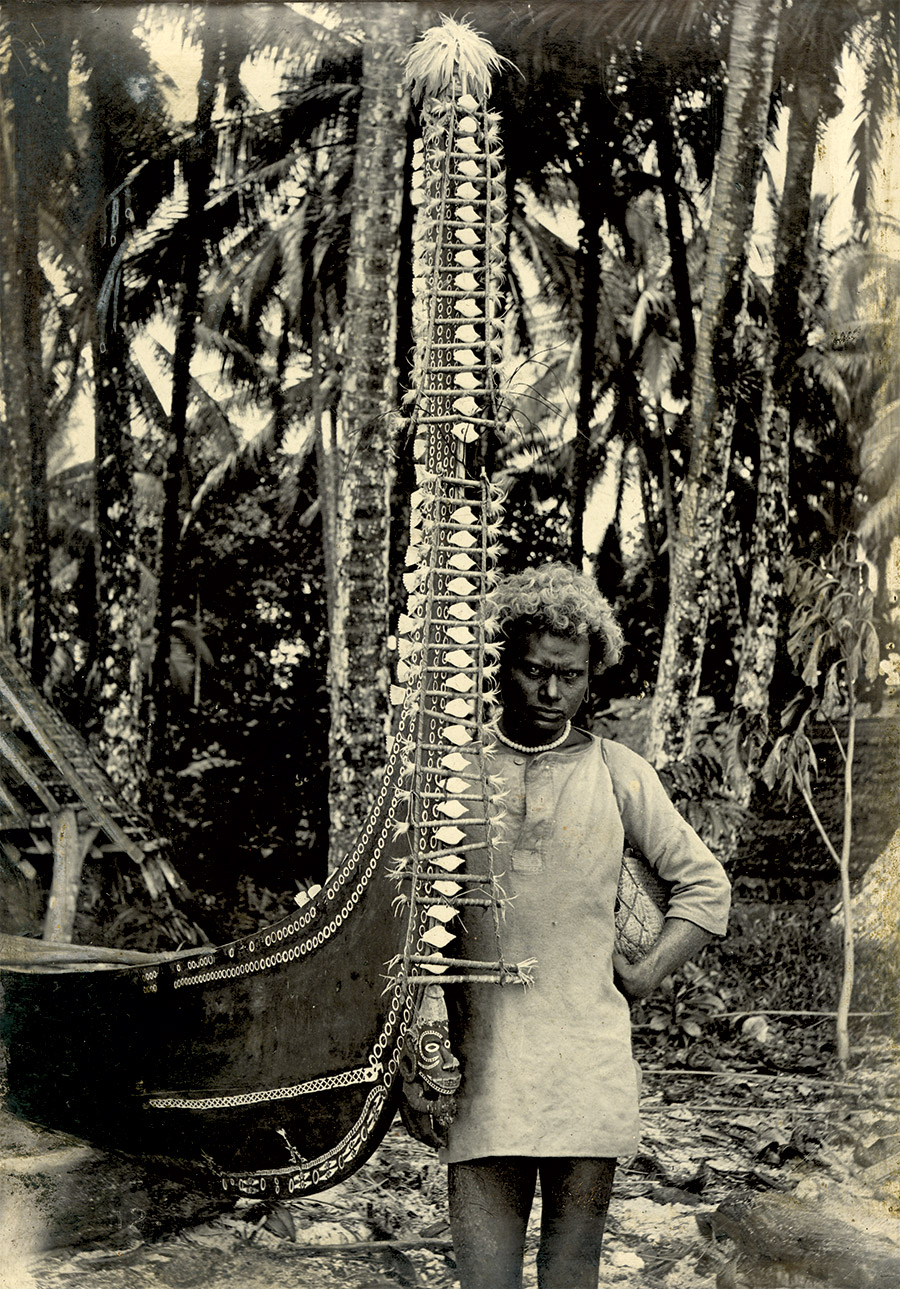 Islands in a vast ocean, canoes and boats play a big role in Melanesian history. In Fijian folklore, kaunitoni was a canoe that carried ancestral founders to the island. Pictured here is a decorated canoe in the Solomon Islands (named by the Spanish, who, finding gold on their arrival in 1568, thought they had discovered the source of King Solomon’s wealth). From 1865, boats facilitated the colonial practice of ‘blackbirding’, the transport of people through deception or force for the purposes of labour. Large numbers of Solomon Islanders and Vanuatuans were taken to Fiji to work on cotton plantations. 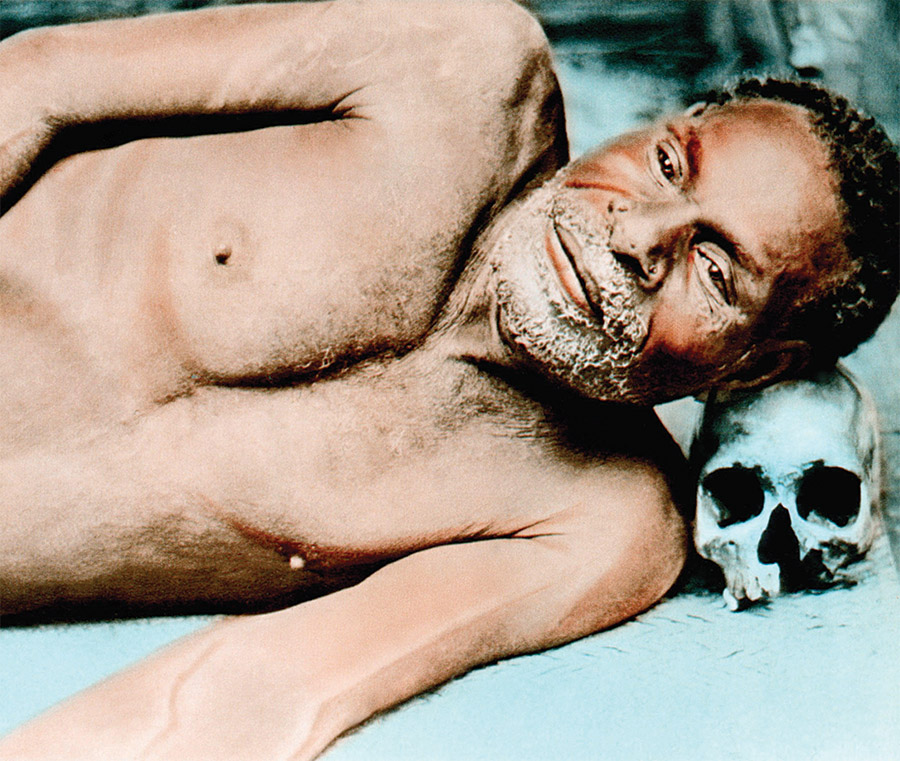 Though not unique to Melanesia, the widespread practice of ‘headhunting’ has long repulsed (and fascinated) foreigners. In 1901, a British missionary, Harry Moore Dauncey, estimated seeing 10,000 skulls while accompanying a punitive raid of the Papuan island Goaribari (itself a reprisal for the islanders’ murder and consumption of missionaries). In his 1914 study of Melanesian society, the anthropologist W.H.R. Rivers noted that the ‘skull-cult’ was particularly prominent on the Solomon Islands: ‘As the symbol of a person … skulls of enemies have become the chief object of warfare.’ As seen here, veneration of skulls was still ‘alive’ in the late 20th century. 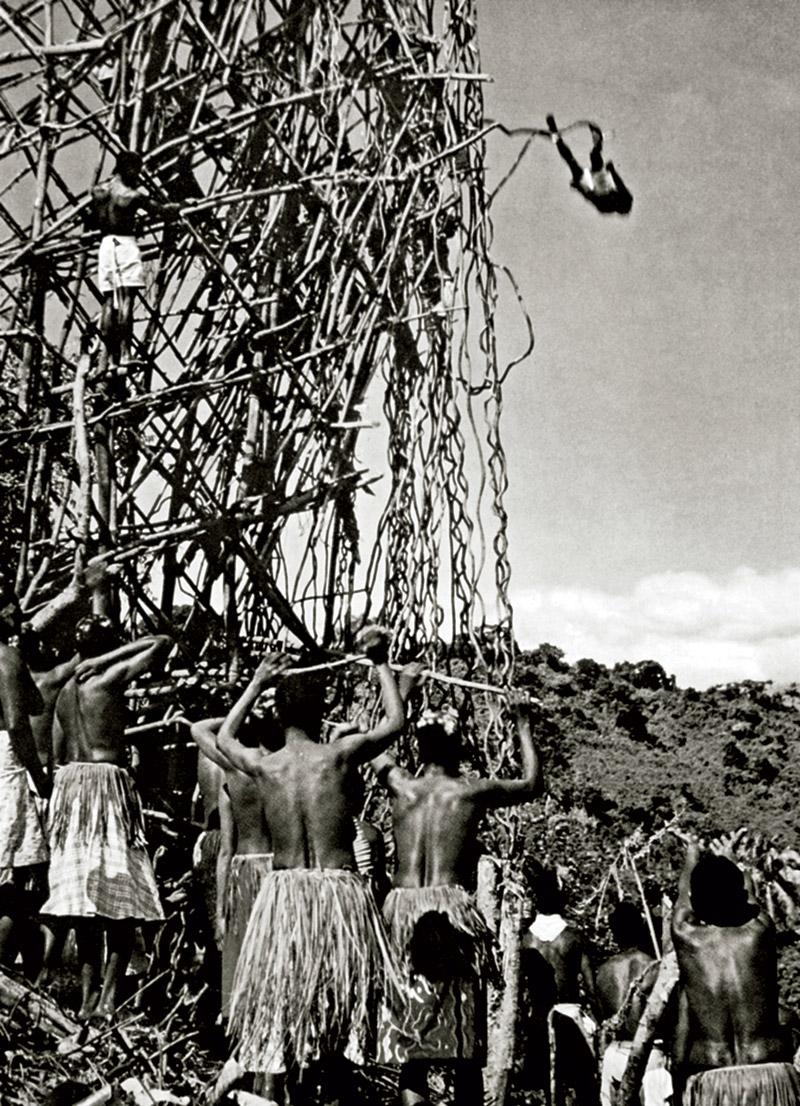 Based on obsolete ideas of race, why is ‘Melanesia’ still used? Fiji, Papua New Guinea, Solomon Islands and Vanuatu became independent in the late 20th century, while New Caledonia will vote on independence in 2018 and Western New Guinea was annexed by Indonesia in 1962. For some Melanesians, the term has become a positive term of identity. Seen here, the ancient Vanuatuan ritual naghol (vine diving) survived the colonial era (despite attempts to eradicate it)and is now emulated worldwide as bungee jumping. 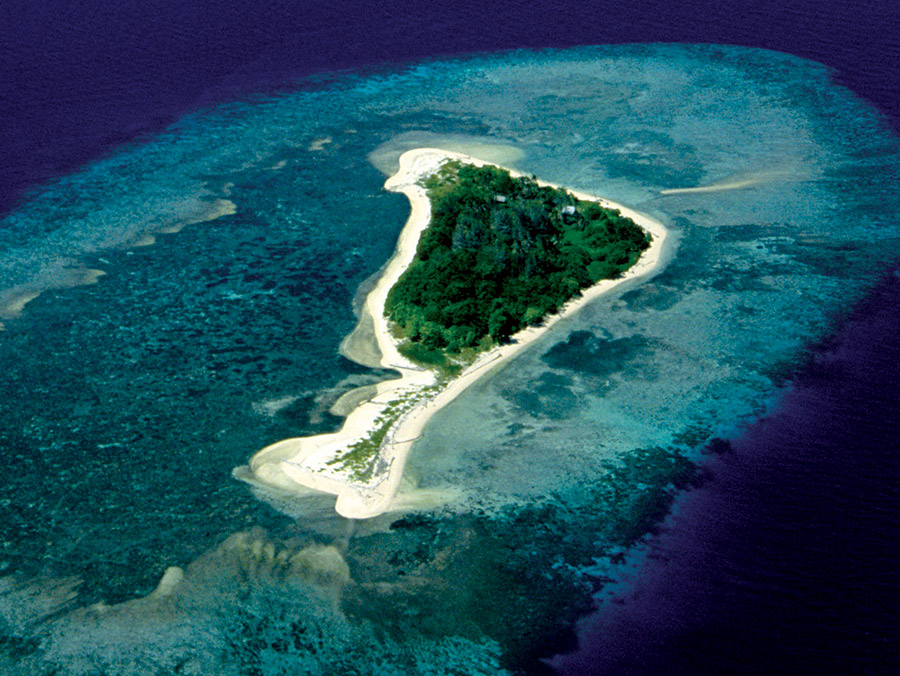 Named for a British royal in 1767, the Duke of York Islands hosted German trading stations, a nudist colony and Methodist missionaries in the 19th century. It was a period in which, as Bernard Narokobi writes, Melanesia was ‘invaded by a huge tidal wave from the West in the form of colonisation and Christianity’. But the islands also face literal climatic disasters; in addition to earthquakes, tsunamis and volcanic eruptions, Melanesia is on the frontline of rising sea levels: 1,000 Duke of York islanders were evacuated in 2000. The islands continue to sink.