‘Where is Uzbekistan?’ The question was asked in a Newsweek headline of 31 October 2017, after Sayfullo Saipov, an Uzbek national, had just carried out the worst terrorist attack in New York since 9/11. Jadidism – an Islamic modernist reform movement – had provided Uzbeks with a form of resistance to Soviet occupation in the early 1900s. Today a more extreme, less progressive form of Islam seems to be providing some young Uzbeks with a sense of identity, possibly in response to years of religious restriction under the regime of Islam Karimov. In answer to the opening question, as home to some of the oldest, wealthiest Silk Road cities, Uzbekistan was once at the centre of the world’s trade network; if Xi Jinping’s ‘Belt and Road Initiative’ to reconnect China and Eurasia with trade succeeds, it may become so again. 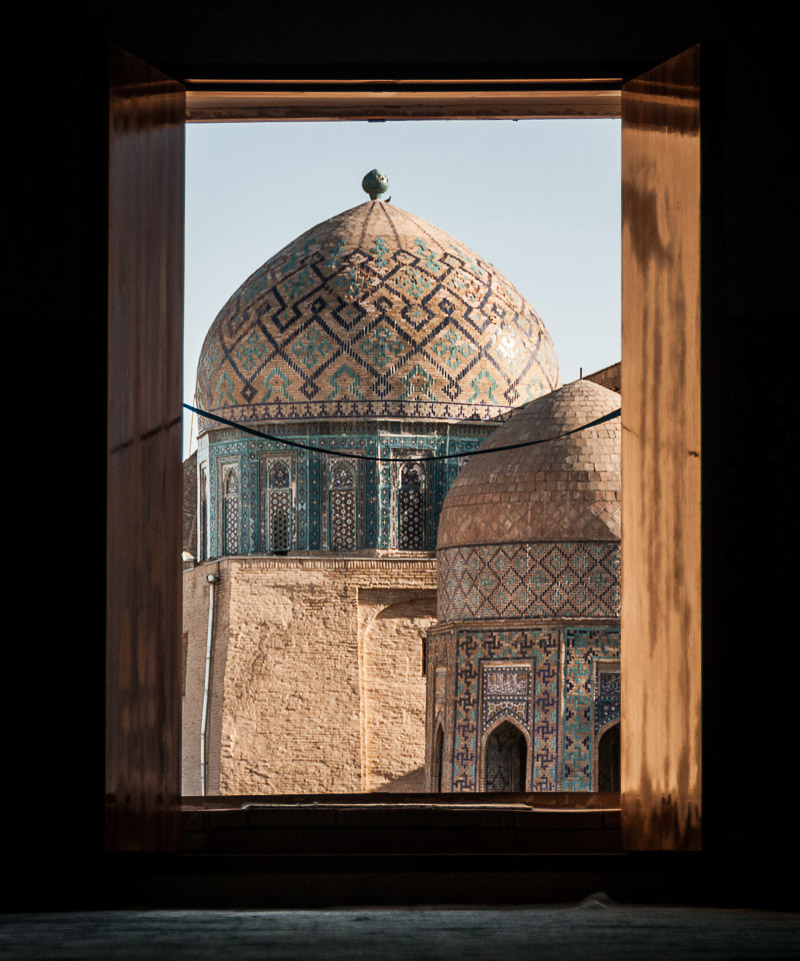 Occupying a prominent position on the ancient network of trade routes stretching between Japan and the Mediterranean known as the Silk Road, the impressive architecture of Samarkand and Bukhara – two of the oldest cities in Asia – reveals the wealth and status they once held. The development of ocean travel later circumvented the traditional Silk Road route, leading to inevitable decline; Uzbekistan is one of only two double-landlocked countries in the world. 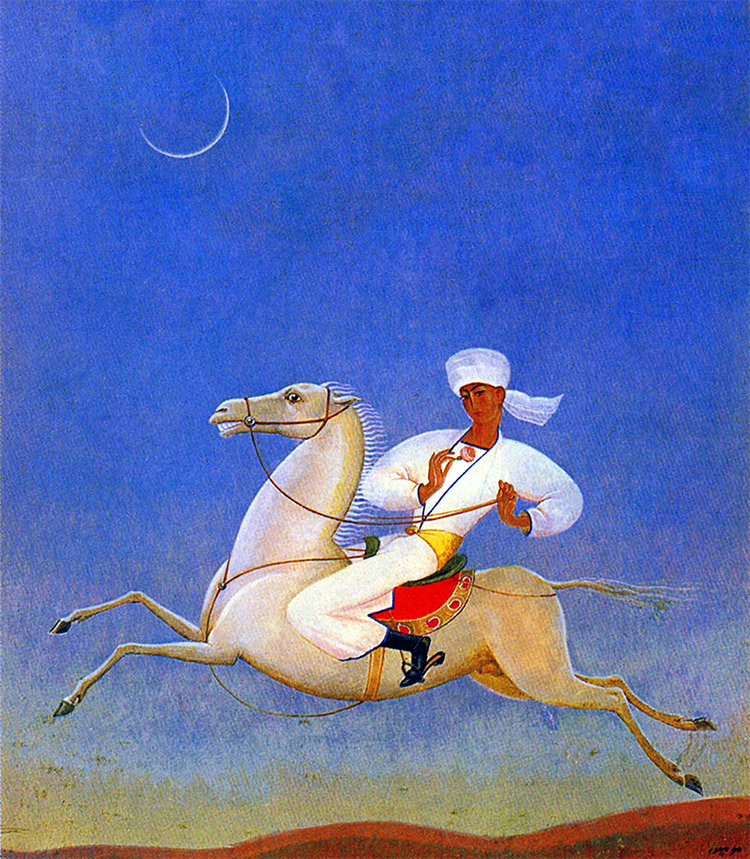 Russian by birth, the artist Aleksandr Nikolayev was sent to Tashkent in 1920. He became enamoured of Uzbek culture, changing his name to Usto Mumin and, possibly, his religion to Islam. Mumin’s adoption of Uzbek identity bucks the trend of the region’s Russification under Soviet control. Yet as with Mumin, Uzbeki nationalism was forged in response to Russia. Angry nationalist feeling accelerated after the Moscow authorities used a scandal over cotton production to paint the country as inherently corrupt in 1986. 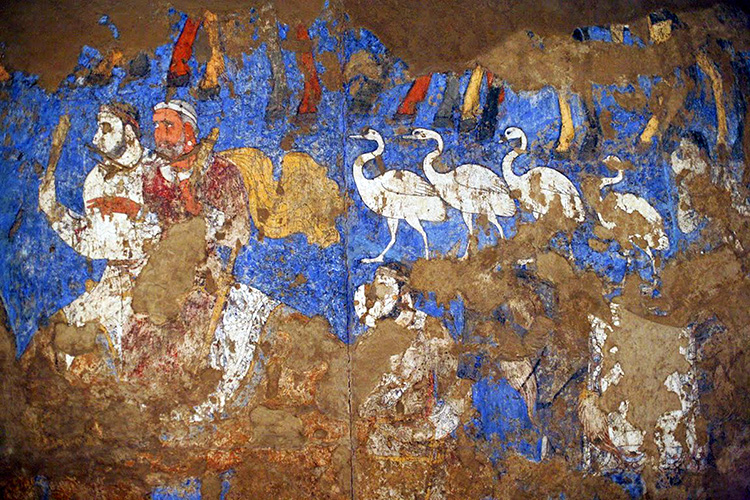 Rediscovered in 1965, the Afrasiab mural covers a room in an ancient Sogdian site north of Samarkand. The painting reflects the wealthy, networked culture of the Silk Road city, depicting envoys from Persia and as far away as Korea, as well as Indian scenes and a Chinese boat, possibly carrying a Chinese princess to Samarkand. 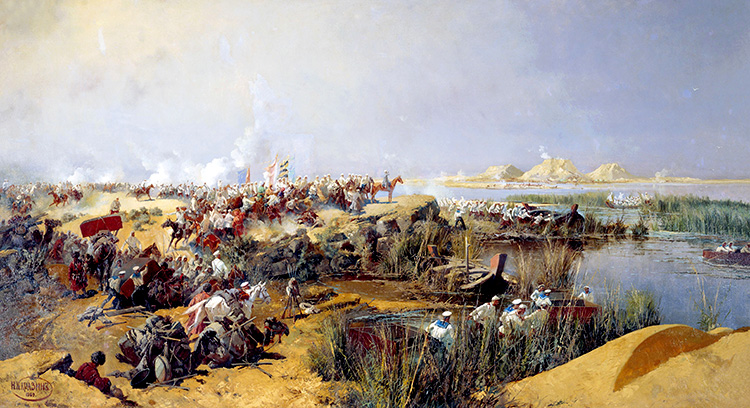 Having conquered the khanates of Tashkent, Bukhara and Samarkand, Tsar Alexander II’s army crosses the Amu Darya (river Oxus) to take Khiva and complete its conquest of Central Asia. It was not the first army to cross the river; Uzbekistan covers part of the historical region known, after the conquests of Alexander the Great in 328 BC, as Transoxiana (‘land beyond the Oxus’) and, after the arrival of Arab forces, as Mā warā’ al-Nahr (‘what is beyond the river’). 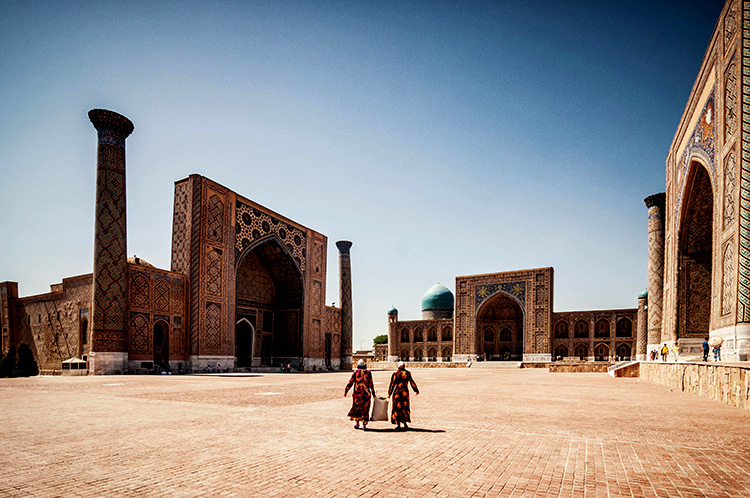 The Muslim conquest of Transoxiana took place between 673 and 751, led initially by Qutayba ibn Muslim, commander of the Umayyad Caliphate. After the Umayyad was overthrown in the Abbasid Revolution, Islamic control over the region was secured with the defeat of Tang Dynasty China at the Battle of Talas River in 751. Bukhara and Samarkand became great centres of Islamic learning, shown in the impressive architecture of the three madrasas pictured here. Uzbekistan remains a Muslim country. 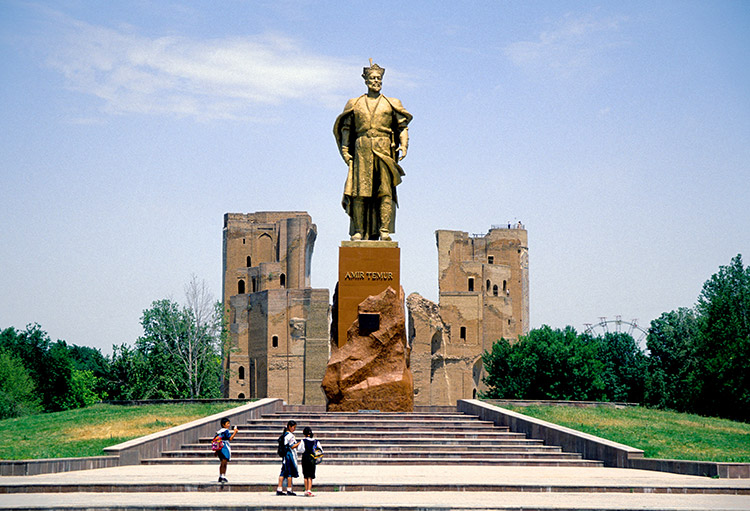 The Mongol Empire spread across Central Asia in the 13th century. After Chinggis Khan’s death, Timur (or Tamerlane), originally a sheep rustler, seized Samarkand, married a descendant of Chinggis and, in 1370, established the Timurid Empire, slaughtering millions in the process. His notoriety does not seem to have affected his status as a national hero: in 2000 President Islam Karimov addressed the nation saying: ‘You are descendants of a great people – you have in your hands the might of Tamerlane.’

Pawn In The Game

In the 16th century, Uzbek nomads invaded the region that today is Uzbekistan, establishing khanates. Preoccupied by internal battles, they were conquered by Russia as part of the ‘Great Game’ between Britain and Russia for control of central Asia. Following the Russian Revolution, the Uzbek Soviet Socialist Republic was established in 1924. 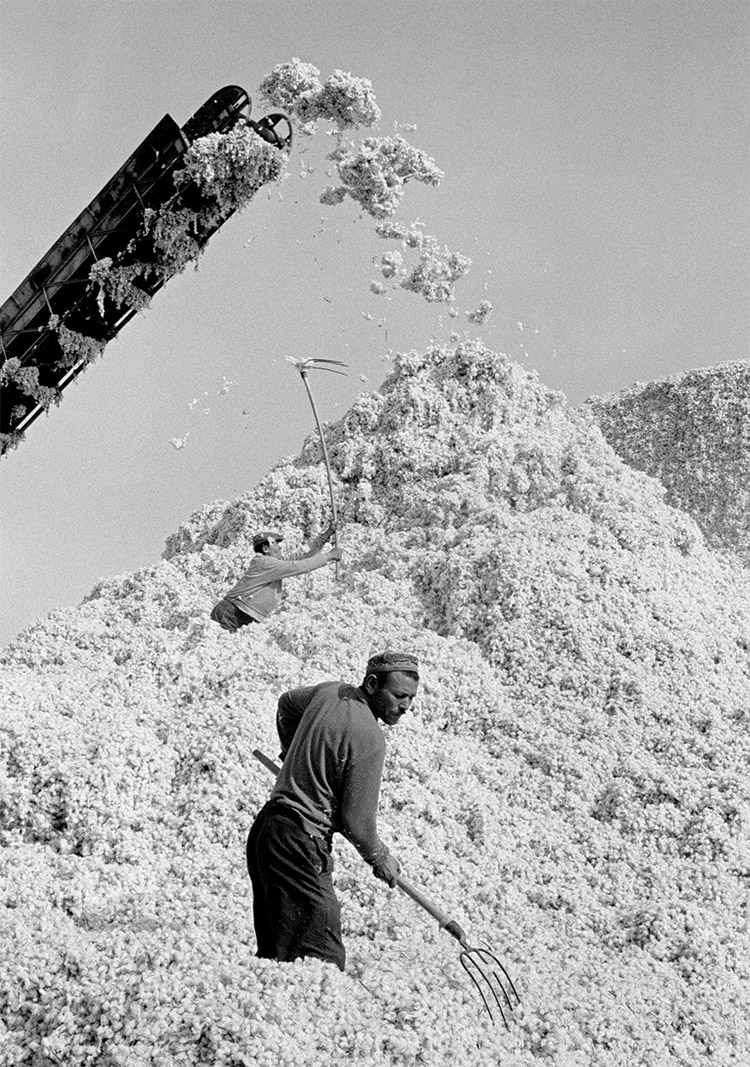 Uzbekistan was the chief cotton-growing region in the Soviet Union. Under Soviet control, the entire agricultural economy of Uzbekistan was dedicated to the crop’s production, most of which was transported immediately to Russia by railway. The ecological effect of the ruthless drive to produce cotton was disastrous (see following page). The region’s ability to produce cotton piqued Russia’s initial interest in the mid 19th century, as its other major source of the product – the US – had dried up due to the Civil War. 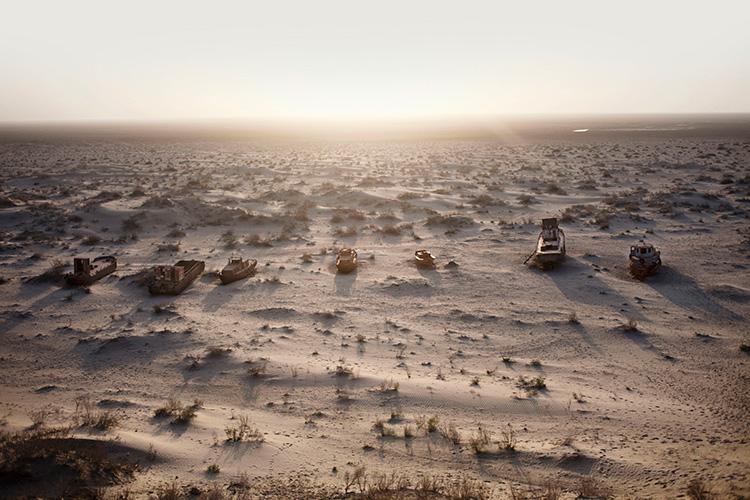 Here the long-term effect of diverting the Amu Darya for cotton cultivation in the 1960s is made abundantly clear. Once the world’s fourth largest inland sea, the Aral has suffered a process of desertification that has seen the disappearance of around 60,000 square kilometres of water. Only ten per cent of the original sea remains. Karkalpakstan – an autonomous region in the country’s north-west and one of the poorest parts of the former Soviet Union – has been particularly badly affected, but decades of relentless cotton production have produced less visible disasters, too: chemicals have contaminated the country’s water supply. Salt and dust storms are common. 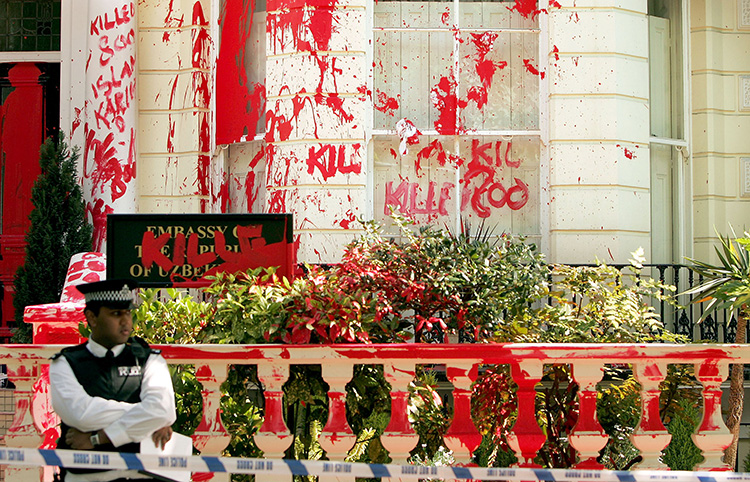 Islam Karimov became head of the Uzbek Communist Party in 1989 and the country’s first president on 31 August 1991, when Uzbekistan gained independence. The country had not sought independence, fearing the curtailment of subsidies from Moscow. Karimov served until his death on 2 September 2016, running a brutal authoritarian state accused of numerous human rights abuses, including the 2005 Andijan Unrest, in which government troops killed hundreds of Muslim protestors, burying many of its victims in mass graves. Protests against the brutality, such as the one pictured, would have been impossible in Karimov’s Uzbekistan. 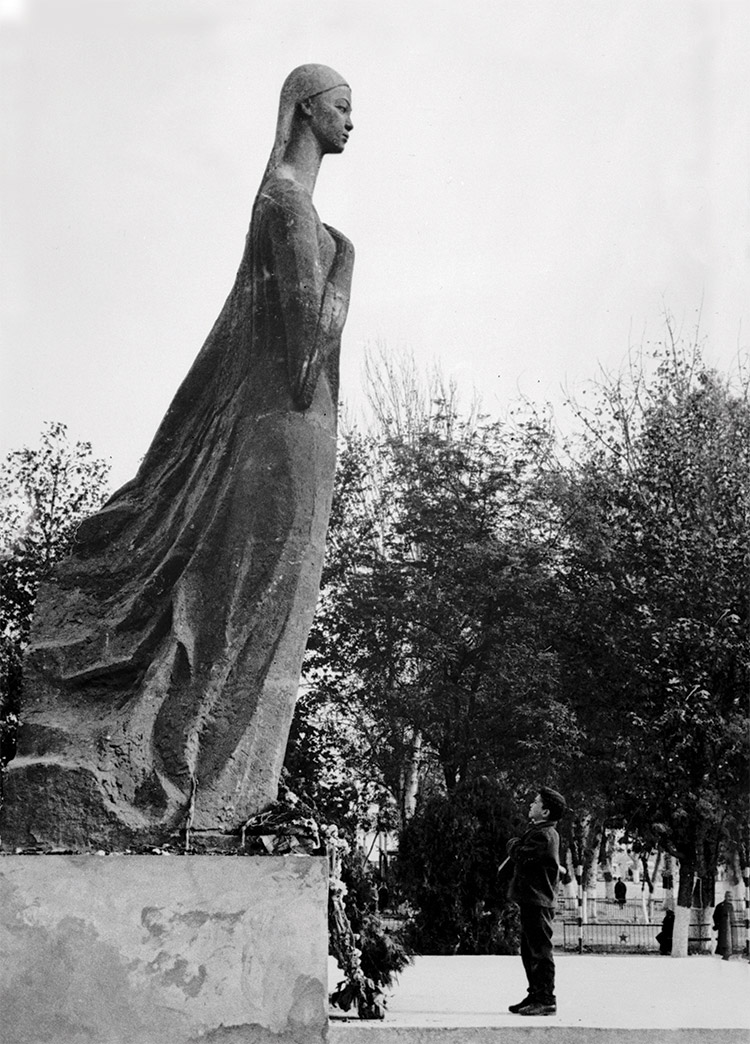 The Soviet regime brought with it Stalinist purges, the Cyrillic alphabet and hundreds of subversive exiles, but it also brought literacy campaigns, land redistribution and the emancipation of women. This statue is of Nurkhon Yuldasheva, an Uzbek dancer, who was among the first women to remove their Islamic veil and was murdered by her brother for doing so in 1929. Soviet authorities declared her a role model and erected this statue in her honour. After Uzbekistan gained independence, the statue was taken down as part of a process of symbolic desovietisation. In the 21st century, the Karimov regime has been accused of the forced sterilisation of women. 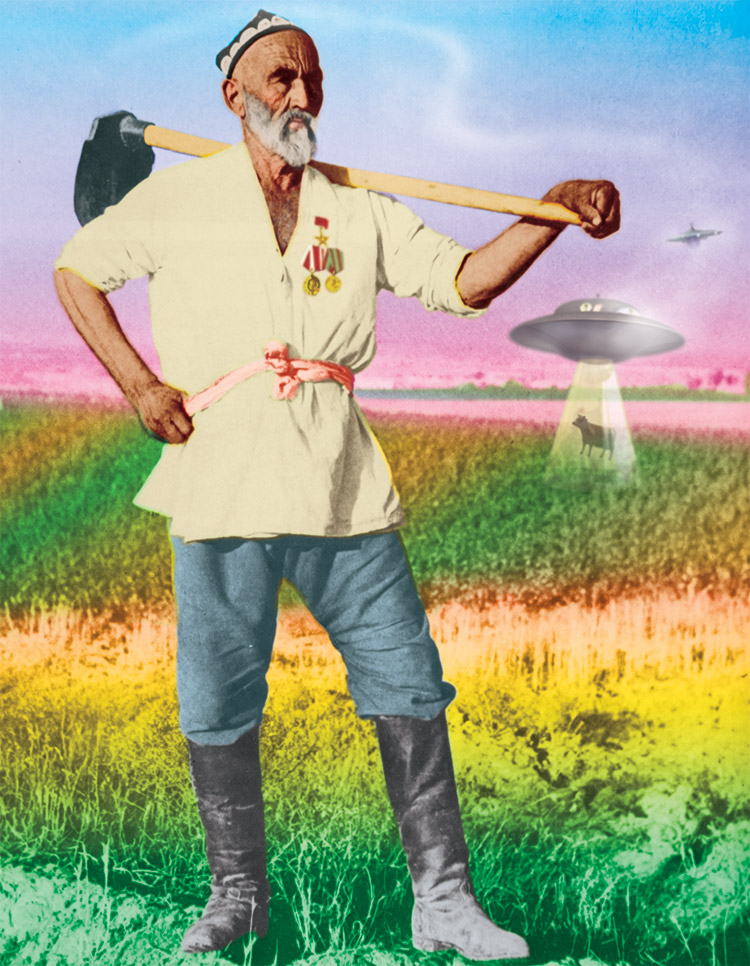 Writing on Uzbekistan’s future in the post-Karimov era, Foreign Affairs magazine concluded that ‘The prospects for positive change are slim ... In many respects, today’s Uzbekistan is in the same condition as it was after the Soviet Union’s collapse.’ This collage by Uzbek artist Alexandr Barkovskiy features a well-known Uzbek socialist figure, N. Niyazov and is taken from a series in which the artist depicts Uzbek society as coloured by his fantasies of western society growing up in Soviet Uzbekistan. 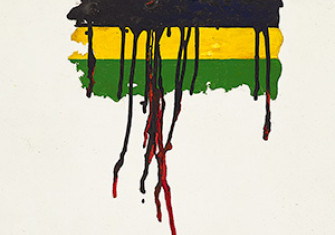 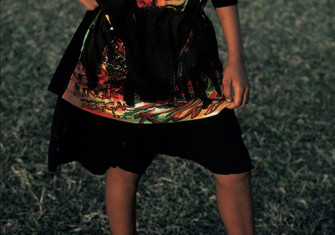