The Monopolisation of Monopoly

As a game, Monopoly is a valuable historical document reflecting the era in which it came of age. 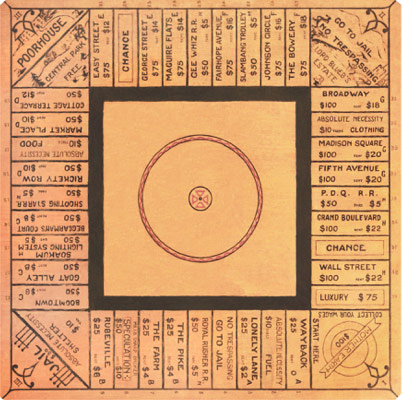 The 2010 documentary Under the Boardwalk: The Monopoly Story follows, in part, lawyer Ken Koury’s attempt to win the 2009 Monopoly World Championship. Koury, having meticulously prepared by assembling a team of Monopoly coaches (including a former tournament winner) crashes out in the opening stages. Why? Because, as anyone who has played the game knows, Monopoly is based almost entirely on luck and common sense; training will improve your chances only slightly more than it would a game of Snakes and Ladders.

Later in the film, a representative of Hasbro, the company who acquired Parker Brothers (and thus its most famous product) in 1991, describes the game as a ‘great way to connect with people’, a tenuous statement at best; Monopoly brings people together as only an activity the objective of which is to wipe out your opponents can. ‘How much did Hasbro pay for this infomercial?’ asked one unimpressed film reviewer. Hasbro was happy to be involved with the documentary, but not with Mary Pilon’s new book, The Monopolists: Obsession, Fury, and the Scandal Behind the World’s Favorite Board Game  – possibly because they anticipated its contents.

Monopoly gets a tougher assessment in Going Cardboard, a 2012 documentary charting the rise of strategic ‘German-style’ board games (of which Klaus Teuber’s The Settlers of Catan is the best known). Monopoly is unfair and early bad luck is often irremediable; it is terribly designed, lament serious board gamers, to which the game’s original designer Elizabeth ‘Lizzie’ Magie might have responded: ‘Exactly!’ In The Monopolists the game we know as Monopoly is analogous with a classic American anti-establishment folk song that, having been subject to various versions and enjoyed in the public domain for years, is monetised by big business. Decoded, the game is a valuable historical document reflecting the era in which it ‘came of age’, in the 1930s against the backdrop of the Great Depression. The dilapidated shoe playing-piece represents a common sight during the Depression; the top hat a symbol of Jazz Age elegance.

Monopoly originated, however, in the early 1900s as The Landlord’s Game, designed by polymath Lizzie Magie as a way of teaching the ‘Single-Tax’ theory proposed by economist Henry George. Georgism holds that land should belong to everyone. Those who own land should be taxed for the privilege, but other goods should be exempt. Magie designed her game to demonstrate the evils of land-grabbing, optimistically opining:

‘Let the children see clearly the gross injustice of our present land system and when they grow up […] the evil will soon be remedied.’

For the players on the losing end of contemporary games of Monopoly, this ‘evil’ is keenly felt today.

The Monopolists is essentially a gripping write-up of the legal case pursued by economics professor Ralph Anspach in the 1970s. Having independently invented a game called Anti-Monopoly and incurred Parker Brothers’ wrath, Anspach set out to prove that Monopoly had existed in the public domain long before Parker Brothers started selling the game in the 1930s. Parker Brothers’ version of events (formerly included in every box) held that Charles Darrow, a down-on-his luck Pennsylvanian salesman invented the game in his basement. He didn’t. Darrow, like many others, played a version of the game Magie had invented years before and sold it to Parker Brothers, something the firm was aware of, shown in their willingness to buy up the rights to all other variations of the game, effectively ‘monopolising Monopoly’. The false origins story stuck, one commentator suggested, because it conformed to the ‘Eureka School of American industrial legend’.

Incredibly, Anspach’s detective work allows Pilon to trace Monopoly’s evolution almost exactly from player to player. ‘Pretty’ Ruth Hoskins, a teacher, is identified as bringing the game to Atlantic City in the 1920s where it would gain many of its notable features. Atlantic City was a ‘hotel town’, for example, with clearly definable neighbourhoods of varying desirability defined by race and economic status. There are gaps in Pilon’s history – how, for example, was Charles Darrow able to patent Monopoly in just four months when Magie had patented The Landlord’s Game years before? The truth may or may not be out there; Parker Brothers’ founder George Parker’s diaries are in possession of Hasbro, who are unwilling to share the contents with investigative journalists.

Pilon writes that she often questioned the point of pursing the history of a board game, but she needn’t have; how many leisure activities produced in the early twentieth-century that demonstrably reflect their era hold mass appeal over 80 years on? Unlike other enduring pastimes – cinema, for example – Monopoly has barely changed since 1935. Despite its mass popularity, the game divides players: its moral message lies in the eye of the dice thrower. Yet reflecting on its current popularity its interesting to note that Parker Brothers initially rejected the game in the 1930s. ‘Who would want to play a real estate game when housing was at the root of so much distress for many families?’, they reasoned. Monopoly has been among the world’s best selling board games in every year since our own Great Recession.

The Monopolists: Obsession, Fury, and the Scandal Behind the World's Favorite Board Game is published by Bloomsbury.