Monetising the Past: Medieval Marginalia and Social Media

Medieval marginalia have found an unexpected second life on Twitter. But why have they been so successful, and how should we treat them? 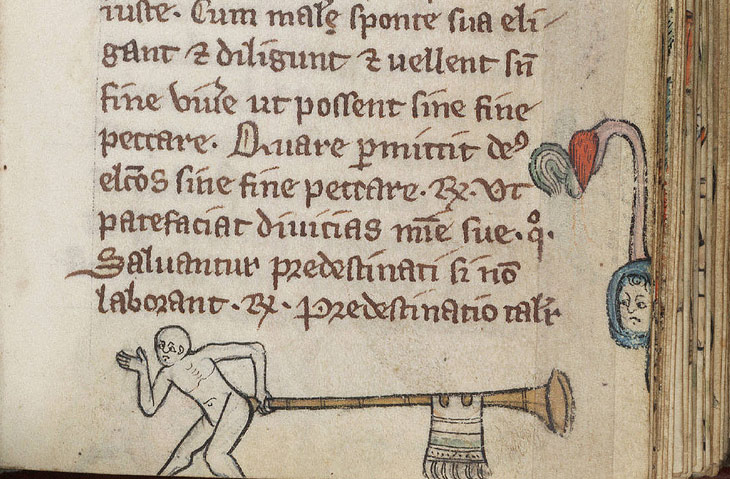 Our view of the medieval world is a mixed one: it is austere and vehemently religious, dominated by dour, moralising ecclesiastics, and it is wild and lawless, with widespread barbarism and strange, incomprehensible beliefs.

Manuscript marginalia sit perfectly at the intersection of the two.

We know that manuscripts are incredibly valuable and time-consuming productions requiring many hours of manpower, countless animals farmed and fed for their skins and inks made from pigments imported from across the known world. And they contain texts worthy of such effort: biblical works, psalms, homilies and great scientific treatises. Yet to decorate these books the illuminators chose to paint, often very beautifully, snails jousting knights, monsters with faces on every joint and cats with snails’ shells. It seems to undermine the endeavour.

A series of posts by Mallory Ortberg at The Toast (Two Monks Inventing Things) perfectly captures our imagined mindset of these artists. Even the comparatively mundane images show a different aesthetic, one in which scale, perspective, proportion and naturalism are not as important as imagination and message.

Debate over the purpose of these illustrations has continued, seemingly from the very beginning of their use. In the 12th century, St Bernard of Clairvaux wrote,

What profit is there in those ridiculous monsters, in that marvellous and deformed beauty, that beautiful deformity? To what purpose are those unclean apes, those fierce lions, those monstrous centaurs, those half-men…

Many marginalia are the artist’s response to the text they surround, either as straightforward illustration or as commentary upon it. In the Luttrell Psalter, a 14th-century book of psalms, for example, many of the illustrations portray the message of the psalms they accompany, exemplifying Christian behaviour: alongside one a rich man demonstrates charity by donating to a leper child in a wheelbarrow; in another, a rich man ignores the poor person he is riding past and promptly falls off his horse – this accompanies the line ‘I become like them that go down into the pit’.

Where they are not obviously illustrating the text, scholarly thought ranges between believing that these marginalia are purely decorative and that their every aspect is symbolic. A persuasive argument can also be made for their having a mnemonic function. In the Luttrell Psalter, certain marginal images can be found alongside every occurrence of certain words: for example, where nocte, ‘night’ appears in the text, a black bat is drawn in the margin; where floreat, ‘flourish’ is written, a rose in bloom is drawn. However, this interpretation is dependent on both artist and readers understanding the images’ meanings. Alternatively the mnemonic purpose could simply come from making the manuscript memorable and meditative: a reader is far more likely to remember a text bordered by weird and wonderful figments of the imagination than by something more prosaic.

As recently pointed out by Matthew Sweet on Free Thinking, medievalists are particularly active on Twitter, and book historians like @Erik_Kwakkel have reached huge audiences posting beautiful, strange and fascinating manuscript images. A large part of this current success is the recent move towards digitising archives: the British Library, for example, has put its Digital Catalogue of Illuminated Manuscripts in the public domain and is steadily producing new, high-quality digital facsimiles of its collections, available for research and study purposes. This move is changing the way historical resources are being studied in new and exciting ways.

Images of marginalia seem to flourish on Twitter and blogs, where bitesize ideas and images spread like wildfire across vast communities of readers. While they were created with reference to known and understood mythologies, symbolism and narratives, as well as to the texts they accompanied, to a modern viewer they can stand alone, independent of these contexts. Unlike medieval writing, they are immediately accessible, if inexplicable. In many cases, their inexplicability, borne from their lack of context, only makes them more intriguing. It is not necessary to be an art historian of the Middle Ages to appreciate them.

The inevitable conclusion of the success of marginalia on Twitter seems to have come with @MedievalReacts – an account which pairs manuscript images with captions and jokes – the brainchild of Cathal Berragan. The success of this account (it currently has over 269,000 followers) lies in juxtaposing a common and obviously modern experience with a medieval image that seems to perfectly encapsulate that moment.

When you come home and haven't seen your dog in ages pic.twitter.com/Pg9hnfAfmm

In itself this is merely an extension of what medievalists have been doing: sharing a picture and giving it a light-hearted caption, where the humour often lies in the author being an expert wilfully misunderstanding the material. But where medievalists are sharing their passion, @MedievalReacts is making money: it is part of a marketing group called Social Chain which, according to its website, '[owns and manages] almost all of the biggest social media pages in the UK'.

In a recent interview with Vice Berragan says he considers it fair game if people appropriate his material as, once it is on the Internet it cannot be controlled. However, he also adopts this attitude in acquiring his material, trawling it from blogs, Twitter accounts and libraries, without acknowledgment or credit. Even a cursory glance through recent posts shows that many of the images he uses were not made available for commercial use by their holding archives and there is debate as to whether his use counts as parody or commentary. Legality aside, good practice dictates that sources be acknowledged, be they the person or institution who shared the image or the manuscript from which it came.

However, the issue many medievalists have taken is with the appropriation of their work, out of context and without any of the passion they feel or the research and discussion they share, with the sole purpose of profit.

Considering this, it seems of little concern that he frequently posts non-medieval images.

A veteran and his wife, circa 1860s. pic.twitter.com/x3WBLU1tdq

On the subject of the historical picture accounts, which have also come under fire for their lack of sources and slapdash approach to historical facts, Sarah Werner writes

Feeds like @HistoryinPics make it impossible for anyone interested in a picture to find out more about it, to better understand what it is showing, and to assess its accuracy … These accounts capitalize on a notion that history … exists for us to look at and exclaim over and move on from without worrying about what it means and whether it happened.

This is as true of ‘Two Monks Inventing Things’ as it is of @MedievalReacts. Conversely, a recent British Library publication by Damien Kempf and Maria L. Gilbert, Medieval Monsters, works through some of the more popular monsters to appear in the margins of medieval manuscripts. While they are shown in isolation, the book shows the myths and legends of the medieval period portrayed in fantastic variety through the monstrous: Alexander the Great, unicorns, cyclops, Jonah and the whale. Through them we glimpse the medieval mind-set, their sense of humanity and their fear of and fascination with the unknown: the marginal. It shows the insight to be gained from even the slightest bit of context.

Perhaps the success of these accounts would be lessened if a tweet were busied with shelfmarks, dates and sources, but wouldn’t it be nice if these huge audiences had the choice between investigating them further or not, and if libraries and archives received due credit for making this wealth of material available. Understanding these images does not make them any less fantastic. 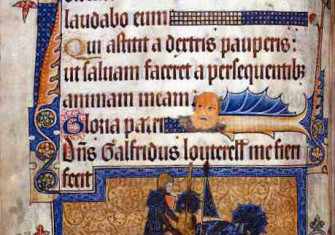 The Luttrell Psalter and the Making of ‘Merrie England’