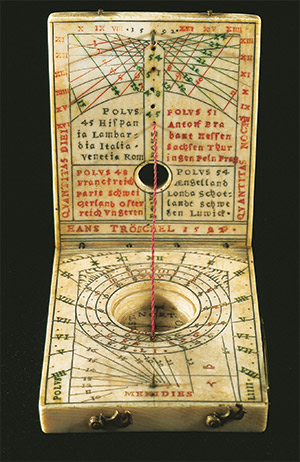 If we think of time at all it is as a dimension: something we travel through, an abstract and universal measure against which we mark our progress and against which we are judged, from minute to minute, from hour to hour, from day to day, from birth to death. It dominates our lives and, like life under all tyrannies, we are so immersed in the ubiquity of its oppression we don’t notice the constraints. From where I sit now, I can see the time in three places. If I cared to, I could find it in four more without moving from my chair. The computer on which I am writing this can, with a little effort, be made to measure time in microseconds.

I can think of no practical use for that level of knowledge; but it is difficult not to feel the anxiety of its influence. Quick is good. Fast is better. Speed is everything. Most of us mark out our working days – and too much of our private lives – in the fine-sliced minutes of deadlines, alarms, appointments and schedules.

The ability to dissect time in such detail is a relatively recent phenomenon. Clocks did not have minute- or second-hands until the late 1600s. Hence there are no seconds in Shakespeare and minutes are mostly metaphor. The shortest practical unit of time in his plays is the quarter hour, as in the length of time Lady Macbeth has been seen trying to scrub the imagined blood from her hands, or that Prince Hal boasts it would take him to learn how to speak like a tinker.

But what was it like to live in a world so heedless of the passage of time? One answer is that one’s relationship with it becomes far more subjective and personal. The Greeks recognised two kinds of time: chronos – the scientific measurement of its passage – which is the sense we have retained; and kairos, which is more epiphanic, opportunistic and experiential. It was, and remains, also the Greek word for weather.

Even Renaissance science had to resort to more ad hoc, human measures, a quality of experience we can savour in a weather-related story. Among the papers of Thomas Harriot, the English mathematician and sometime scientific adviser to Walter Ralegh, is the record of a rainy afternoon in his room up beneath the leads in Durham House, Ralegh’s magnificent London home on the Strand, overlooking the Thames. Presumably at a loose end, Harriot decided to calculate how much rain would have fallen in his room over a 24-hour period were it not protected by its roof.

He had no means of measuring the passage of minutes or seconds, so he used his pulse, assuming that each beat of his heart equated to a second.

This was poor science but it points to an understanding of the world which we can no longer share. Time wasn’t only, or even principally, an external measure but also something to which our bodies and our experience of our bodies, our sense of ourselves, could be wholly aligned.

There is a similar story about the Counter-Reformation Cardinal and Jesuit, Robert Bellarmine, one of the judges who sentenced Giordano Bruno to be burned at the stake and the man who told Galileo to abjure Copernicanism. He was not in any sense anti-intellectual and had always had a deep personal interest in astronomy and science, but simply refused to accept that it could not be reconciled with doctrine.

On one occasion he set out to measure the speed of the sun’s rotation about the earth by sitting on a beach in south-west Italy – most likely Calabria – and timing the sunset. With no means of measuring time, however, he fell back on an intensely familiar, regular, unvaried unit of time, the recitation of Psalm 51, the miserere: ‘Have mercy upon me, Oh God.’ It is an acutely poignant image, the very measure of time he used embodying both the futility of his actions and the devotional passion of his certainties.

On some level, then, the emerging tension between chronos and kairos was also the struggle between empiricism and, for want of a better word, spirituality. The shadow of these tensions fall across Henry IV. Prince Hal’s destiny, his royal inheritance, is the arrow of time pulling him forward towards history. Falstaff is all kairos, life in the moment, to whom the measure of minutes and hours is superfluous. ‘What a devil hast thou to do with the time of the day?’ Hal asks him in their first scene. Falstaff – no one’s idea of spiritual – has no answer. But then, what is the answer to the demands of chronos?