The Complex Origins of the First World War

If one is looking for a single definitive cause for Europe’s collective decision to fight in 1914, the only certainty is disappointment, argues Sam Fowles. 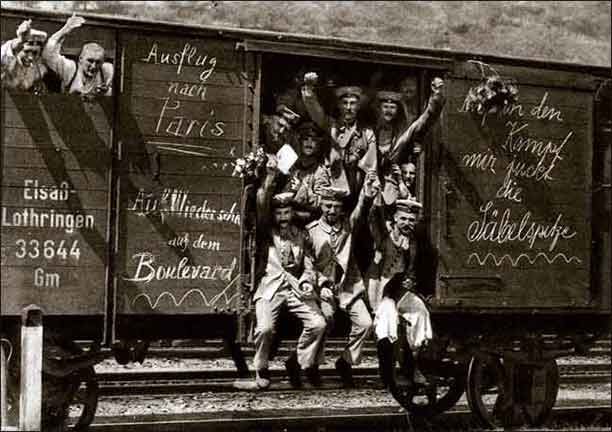 If one is looking for a single definitive cause for Europe’s collective decision to fight in 1914, the only certainty is disappointment. Yet the ready availability of sources and, until recently, first hand accounts has facilitated a plethora of theories. Michael Gove and Boris Johnson exemplified just one when they claimed that the First World War was a “just war” brought about by German expansionism. The danger of the public debate that has followed is its fundamental reductionism. To up the historiography of the years leading to 1914 as the “conservative view” (it was all Germany’s fault) versus the “left wing view” (it was the fault of the elites) ignores the complex politics, not just of the origins of the war, but of attempts to analyse them. Few periods so dramatically exemplify E. H. Carr’s dictum that a history reveals as much about the historian as the subject of his study.

The classical reading, espoused most recently in the  work of Max Hastings, was conceived before the war itself was over: The aggression of the un-democratic German imperium forced the Entente powers into war to defend, not just the balance of power, but their way of life. The German historian, Fritz Fischer, unearthed records of a German “plan” for war in 1912, postponed until 1914. But Fischer’s sources lack context, one perspective of one meeting does not a world war make, and they ignore the impact of the actions of those beyond Germany. Internal competition for power between Austrian and Hungarian elites contributed to the development of a significant “pro war” party in the Habsburg empire, France’s desire to recover prestige (and territory) lost in the Franco-Prussian war increased the belligerence of its diplomacy (and efforts to secure a guarantee of Britain’s involvement). Meanwhile Douglas Hurd describes the fear of German rearmament and colonial expansionism which was the primary concern of the British foreign office. Yet these same actions were seen in Germany as simply a defensive effort to mitigate Britain’s naval and territorial superiority. Britain had followed a policy of excluding rival states from swathes of Africa and Asia in order to protect its commercial interests. Meanwhile the, supposedly aggressive, German naval development never yielded a fleet even half the size of Britain’s. Fischer’s own research shows that Germany’s preemptive strike on France was motivated by fear of Russia’s massive rearmament programme from 1912.

By contrast, revisionists of the Marxist school contend that by 1914 war was inescapable. Not because of the actions of any single state, but because the structure of an imperialist global order and capitalist economic system made war inevitable. With juggernaut industrialisation necessitating continuously escalating appetites for natural resources, European states grasped for ever more extensive imperial possessions. Eventual conflict was unavoidable. Yet the underlying determinism of this analysis ignores the impact of individual decisions. European states had been clashing over imperial possessions regularly since the scramble for Africa, yet war was averted many times before 1914. As Margaret MacMillan points out, for the individuals involved, “there was always a choice”.

The analysis of those choices defines the “multiple culprit” school. Seminally espoused in the 1960s by Barbara Tuchman and more recently reinvigorated by Niall Ferguson and Sean McMeekin, this interpretation focuses on the failings of political and military elites. Tuchman blames “overwhelmed, misguided and occasionally mendacious statesmen and diplomats who stumbled into a catastrophe whose horrors they couldn’t begin to imagine”, for McMeekin those in power were simply “not up to the job”, except for Russian Foreign Minister Sergei Sazonov who manipulated diplomats to drive Russia towards war. Ferguson focuses on the internal politics of the belligerents, particularly Britain, where Liberal politicians’ fears of losing office propelled them into escalating a “European war” into a “World War”.

But this focus on purely on decisions themselves can come at the expense of the wider context of those decisions. This is remedied in the work of Christopher Clark and Margaret MacMillan, who employ analytical methods closer to those used in International Relations than traditional history. For them the decisions taken during the crisis were important but should be seen in the context of the institutions in which they were taken, the ideologies and psychologies which framed them and the complex histories which made them necessary. Clark’s exposition includes a detailed account of the development of the ultra nationalist movement in Serbia which facilitated the assassination of Franz Ferdinand (tragically one of the most powerful voices for peace in Austria) and examines how multiple interlocking decisions, none of which caused war in its own right, contributed to a “Black Swan” event that was the First World War.

But this debate could equally be read as a story of different historians as of different interpretations of history. The origins of the Classical school are political (the “War Guilt” clause of the Versailles Treaty) as much as academic. Fischer’s work bears the scars of a German academy still dealing with the guilt of the Second World War, while Hastings, the Daily Mail columnist, appeals to a specific and politically charged audience. Revisionist historians openly wrote for a dual purpose; the advance of historical understanding went hand in hand with the advance of a prescriptive political ideology. The work  of Tuchman and McMeekin reflects their own historical contexts. Tuchman wrote at the height of the Cold War when, just as it had in 1914, blundering by political elites could lead to global slaughter, while McMeekin is a creature of the 21st century’s news-media driven craving for a clear culprit. Similarly Ferguson’s conservative politics are clearly visible in his work.

This contextualisation does nothing to invalidate the work it seeks to analyse. It is, itself, inevitably the product of my own context and inevitable preconceptions. This is what makes history such a rich and vital discipline. The historian must master multiple meta analyses and the ultimate goal is not truth but understanding.

Sam Fowles is a Researcher in International Law and Politics at Queen Mary, University of London