For 200 years, the House of Commons Library has guided politicians and policy. 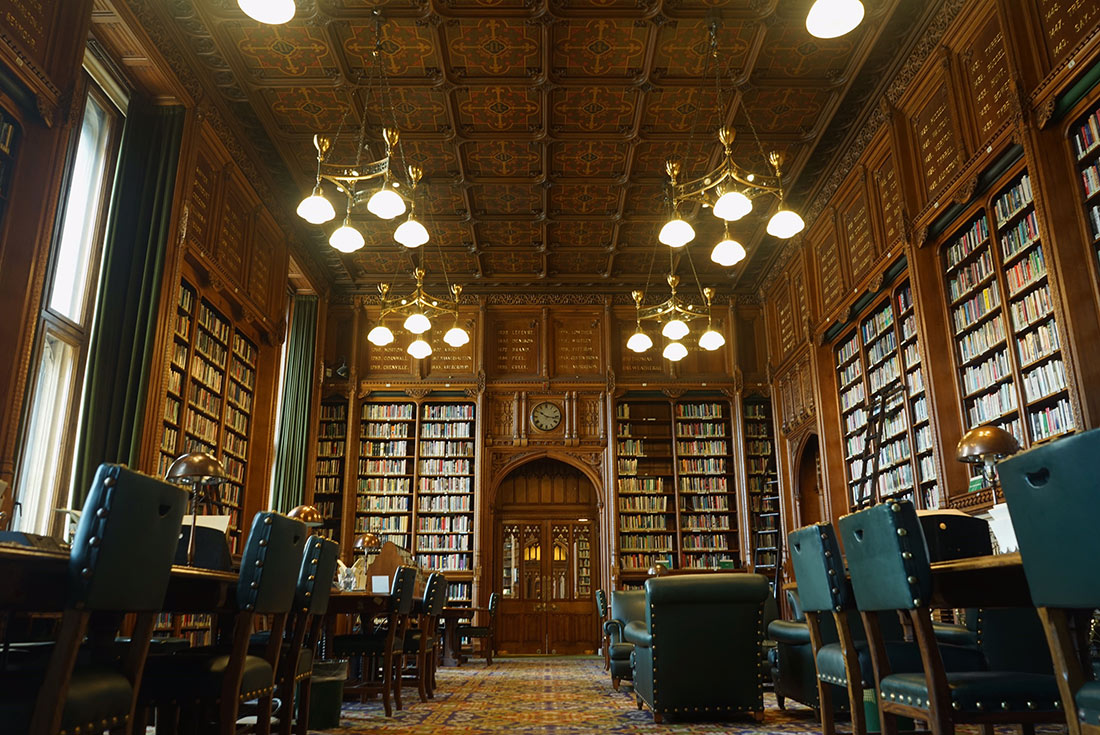 What began as a collection of journals and Victorian bookshelves has evolved into a major source for politically impartial information on matters affecting the UK. For 200 years the House of Commons Library has been a rich archive for MPs and, increasingly, the public.

In 1818, 22-year-old Benjamin Spiller became the first House of Commons Librarian. A newly designed suite for a collection which had outgrown a small room was completed by the architect John Soane in 1828, but was to last less than a decade.

While attempting to dispose of disused tally sticks on the evening of 16 October 1834, the Clerk of Works accidentally set the Palace of Westminster ablaze. The library and two thirds of its collection were destroyed, including a set of Commons records dating back to 1547. Staff inside saved what they could by throwing books out of the window.

The new building, designed by Charles Barry and Augustus Pugin, opened in 1852. The new six-roomed suite was one of splendour, overlooking the Thames, with gothic Pugin furniture and towering windows of the ‘Oriel Room’ marking the entrance which is still used today.

As for its role in Parliament, a discovery of minutes of the Library Committee from 1850 reveal that an intervention by Sir Robert Peel shaped its future. On 16 April, the chairman Sir Robert Harry Inglis, proposed: ‘That the Library … should be a Library of Business and of Reference; and not a Library of mere Reading; and still less, a Library of Amusement’. In response, Peel successfully argued it should, instead: ‘Be useful for the purposes of study and of reference upon subjects immediately connected with legislation and Parliamentary business generally.’ He thus allowed the library’s output to have a much wider remit.

World wars and globalisation compelled MPs to be better informed on foreign affairs and, by 1946, at the behest of a select committee, a politically impartial research division was established.

The library’s demographics began to change, too. The first female library clerk is thought to have been Dorothy Elizabeth Dusart, appointed 15 October 1946. However, Jane Fiddick, a junior library clerk who joined in 1963, is likely to have been the first woman officer of the House of Commons – a title bestowed on clerks of both the library and the House of Commons – giving her access to the Chamber and Members’ Tea Room, where she was ‘constantly and embarrassingly challenged’.

By the late 1960s, the Research Division was publishing ‘reference sheets’: a boxed collection of briefings and background to legislation. MPs could consult the papers in the library but only one at a time. However, when Parliament was recalled following the Soviet invasion of Czechoslovakia in 1968, the head of the Science and Defence Research Section, John Poole, commissioned the production of a coherent analysis of how the situation had arisen, introducing ‘background papers’ to the library’s output. These led to what is today known as a ‘research briefing’, available online for anyone to read.

The vote to join the European Community (EC) on 28 October 1971 is a marker in the library’s history. When the vote took place, Helen Holden, an information specialist in the International Affairs Section (IAS) from 1971 to 1976, was newly appointed. ‘The atmosphere in the House in October 1971, especially on the 28th, was tense’, she said. ‘Much was at stake and there was a degree of cross-party voting on the motion.’

Holden was involved in compiling foreign press cuttings, official documents and treaties and tracking the progress of EC legislation:

Some, especially former ministers, knew exactly what they were looking for and had detailed specialist knowledge in subjects, and then for complete laymen, because MPs can’t be expected to know about everything, we tailored the information to individual people ... It was a subject which divided parties and there was cross-party activity. Very often that happened in the Library ... It was quite a private, safe space.

During the invasion of South Georgia and the Falklands by Argentina, the library’s role in monitoring international affairs was once again used. Following the invasion on 2 April 1982, former senior library clerk Carole Andrews remembers a Commons debate the following day:

I was in the chamber for the opening speeches in the Saturday debate by Margaret Thatcher and Michael Foot. It was a very tense and sober atmosphere. MPs were coming into the Library beforehand, asking ‘Where are the Falkland Islands?’ and we had to obtain detailed maps from the Ministry of Defence. During the war, we hurried home every evening to hear the news, which was carefully controlled.

Richard Ware, a library clerk, was the only researcher covering the Falklands at the time: ‘The sudden lurch towards war was a shock’, he said. ‘Some MPs knew about the Falklands but needed to refresh their memories, and many others had barely heard of them, but wanted to take part in the debates. Some of the most demanding were the Labour opposition frontbenchers who spoke on foreign affairs and defence.’

In the digital age, the library publishes its findings for public consumption. Its guiding principle of impartiality not only holds weight behind debates in the Chamber and policy decisions but ensures it plays the role of fact-checker when necessary.

As an opposition MP, Gordon Brown used library findings to successfully argue that the system used to administer ‘cold weather payments’ hit his Scottish constituents harder than those living in the warmer south. Labour MP Yvette Cooper’s gender analysis of government budgets, in particular the impact on women of changes to taxes and benefits, is also based on research commissioned from the library.

And so, just as Peel intended, the library’s remit to delve into ‘Parliamentary business generally’ allows researchers to examine all areas of life affecting the UK and its international relations. Yet historic junctures, such as the decision to leave the EU, continue to present new challenges, requiring new expertise and a demand for answers.

Along with providing briefings on issues affecting home affairs, international relations, the economy, statistical data and social policy – which in turn aid effective legislation and policy changes – it is to the library that MPs, academics and political researchers are turning for answers on how the historic vote for Brexit could affect people’s lives.

Eleanor Davis works at the House of Commons Library. The author would like to thank Alexander Bellis, Richard Cracknell and Richard Kelly for their contributions and the works of David Menhennet, Dr Mari Takayanagi and Chris Pond.