Citizenship and the Statutes of Iona

Sarah Fraser considers how the Statutes of Iona were an early answer to the problems of citizenship and integration. 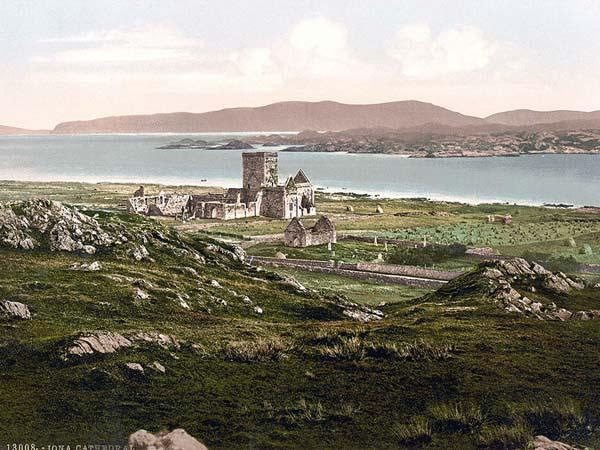 The recent announcement by Home Secretary Theresa May, that the government is to re-write Britain's citizenship test, brings to mind the year 1609 and James VI and I’s response to the limited submission to his rule by his subjects on the Celtic fringes. James’s answer was the Statutes of Iona. They were a test for membership of mainstream Scottish and British society, severely limited though that concept was.

The king’s representative tricked nine clan chiefs into boarding a navy vessel, kidnapped them and sent them to the island of Iona, and did not release them until they signed up to the Statutes. The document dealt with aspects of Gaelic society where the Gaels seemed most separate from the rest of the Scots.

Hence, one Statute set out to break the connection between language, education and home – chiefs’ sons should be sent to Lowland schools to be educated to read, write and speak English, not Gaelic. Increasing comfort with the English language strengthened identification with the values of this acquired language community, and weakened emotional and cultural bonds to home. As this habit grew, the elites and those they left behind shared less and less.

Within Gaeldom, another Statute tackled religious divisions, ordering Presbyterian ministers to be appointed to Highland parishes. Eliminate dissident clerics, put in those who would teach that the national religion was Presbyterian Christianity, and what duties that laid on young Christians in Scotland. The minister was often the schoolmaster, and certainly the catechist, hence a vital element in forming young minds.

Yet another Statute attacked insular Gaelic culture as expressed in traditional hospitality. It placed limits on how much strong drink a chief could buy. The outlawing of bards and sennachies reduced the narrative of how clans were different from other Scots and Britons. Such tradition bearers had reinforced the clans’ distinct culture, as they repeated and disseminated the stories, songs and history of their society at social gatherings. The Statutes were assaulting an abiding and primary virtue of clanship – mutual protection, in part through mutual defence, and in part through reinforcing bonds to each other by feasting and socialising.

Statutory limits were therefore placed on the carrying and use of arms. This was to restrict the clans’ ability to resort to violence in order to attack enemies (including state representatives of law and order) and defend themselves. From now on, Gaels should seek protection from their king. In addition, Highlanders should use national legislative structures and officials to resolve disputes: the law courts and lawyers, instead of resorting to their own long-established clan regulatory and legislative structures. The unresolved issue of the status of Sharia law within Britain is an obvious analogy here.

The results of enforcing the Statutes of Iona are fascinating and illuminate the present, but it would take too long to go into that here.

Sarah Fraser is author of The Last Highlander: Scotland's Most Notorious Clan-Chief, Rebel and Double-Agent

The Myths of Iona

The island of lona became the centre of Celtic Christianity in Scotland with the arrival of St. Columba in 563. Yet the monuments remaining there, argues Ruth Hildebrandt, are representative of another age and do not reflect the beliefs or practices of the Columban church.