Recent episodes in Russia paint a disturbing picture in which the Little Father’s actions and legacy are undergoing rehabilitation, says Emily Whitaker. 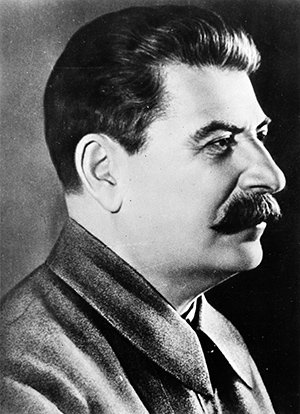 Since Josef Stalin’s death in 1953, and especially following the fall of the Soviet Union in the early 1990s, historians and the public worldwide have been united in condemnation of the Soviet leader and his regime. His ruthlessness, the purges, gulags and famines that left millions of his own people dead have meant that at best he has been viewed as a necessary evil, in recognition of his drive to modernise and industrialise the USSR. Yet, in spite of the millions who suffered and died as a result of his policies, Stalin has long been revered in Russia for leading the country to victory against the Nazis in the ‘Great Patriotic War’, an achievement which was remembered during 60th anniversary celebrations in 2005.

Since then the movement in Russia for Stalin’s rehabilitation appears to be broadening and a more disturbing picture is emerging, one in which the Little Father’s actions, character and legacy are being reconfigured and given altogether different attributes. In 2007 the Putin government directed an initiative to restructure the national curriculum, teaching schoolchildren that Stalin’s actions were ‘entirely rational’. In the same year the archives of the eminent human rights organisation, Memorial, were raided. Police confiscated images of Stalinist atrocities, along with 20 years’ worth of oral testimonies chronicling everyday life under his regime. Most remarkably, when a television station held a national vote for the ‘Greatest Russian Ever’ in 2008, Stalin came third, even after the station had made pleas for the nation to vote for other candidates.

Stalin has been re-introduced to the physical and cultural landscape of Russia. He has become a consumer icon, with a proliferation of watches and other paraphernalia for sale bearing his image. In 2009 a Moscow subway station was refurbished with large inscriptions reading ‘Stalin reared us on loyalty to the people. He inspired us to labour and to heroism’ – a direct quotation from the pre-1977 version of the Soviet anthem.

The mythologisation and resurgent popularity of Stalin goes hand in hand with changes in the way Russia is being governed. Concerns have been voiced both within and outside the country, prompting questions about the politics of memory against a backdrop of controversial legislation, currently being fast-tracked by the government. Proposals include increased penalties for violation of protest laws, non-governmental organisations receiving foreign funding being labelled ‘foreign agents’ – a term synonymous with Stalinist terminology for ‘spies’ and ‘dissidents’ (the NGO bill recently approved by Putin and adopted by the Russian government is explicit in insisting that NGOs describes themselves in this way) and the government being granted permission to censor certain Internet pages.

Russian response to this paradigm shift is conflicted. Battle rages over the interpretation and representation of the former USSR’s difficult past and for every new monument to Stalin erected, another is pulled down.

Ambivalence about the Stalin era is harboured not only by older generations, who still remember Stalin with fear, but also increasingly by the young. Recent opinion polls show that only 46 per cent of people under 30 would definitely not vote for Stalin were he running in an election now. Similarly some of those who remember his rule miss the stability it offered, the country’s superpower status, not to mention its world-leading public transport system.

Putin’s authoritarian actions have not gone unchallenged. After June 2012 saw police raids on opposition leaders’ Moscow homes, the hashtag #hello1937 began trending on Twitter in Russia. The rehabilitation of Stalin’s image has led to protests in Kazakhstan. Meanwhile Ukraine views such images as damaging its chances of being perceived as ‘western.’

Ambiguity pervades at every level. Prime minister Dmitri Medvedev is anti-Stalin and debate continues within the still large Russian Communist Party over how to ‘deal’ with Stalin. In 2010 the Russian State Duma voted in favour of blaming him for the Katyn Massacre of 1940, in which 20,000 Polish officers died. The year before, Stalin’s grandson bought to court a libel action against a Russian newspaper’s description of Stalin as a ‘bloodthirsty criminal’. His claim was rejected.

As the wider academic world engages in these shifts new books more sympathetic to Stalin have begun to appear, though many historians, including Orlando Figes, openly criticise the process of rehabilitation and the historiographical debate continues.

The recent trial of the Russian female punk band Pussy Riot for their protest performance in Moscow’s Cathedral of Christ the Saviour has hinted that political opposition to Putin is gathering in Russia, though their subsequent sentencing to two years in prison indicates that Putin is not afraid to rely on authoritarian methods to deal with it.

The Russian government is not the first to attempt to reshape the narrative or to re-invent its history for current political use. Its variation on history is in this case sanitised, polished, rehabilitated and used as a template for a modern version of centrally controlled leadership. But, given the sheer scale of Russia’s Stalinist past, issues of selection and interpretation, of memory and representation are all the more problematic.

Despite the fact that their controversial performance violated no laws, a recent Levada Centre poll showed that only five per cent of Russians believed that Pussy Riot deserved no punishment; in times of economic and political uncertainty nostalgia for the past and a yearning for strong leadership emerge and so the legacy of Stalin becomes a cause for celebration rather than anxiety.

Emily Whitaker is completing a masters degree in Public History at Royal Holloway, University of London.