Sarah Searight highlights the problem of pillaging for those trying to piece together Mali’s rich heritage. 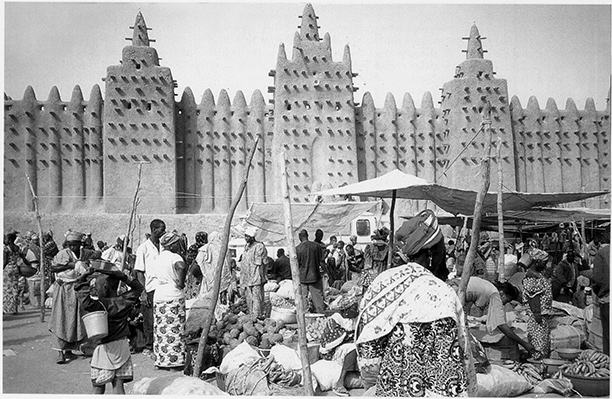 The looting of Iraqi treasures has been much in the news since the occupation of that sad country, in spite of the fact that it had been going on for years. The appetite of the international art and antiquities market is insatiable. For a much poorer country, with a long history but few funds with which to preserve it, looting, or pillaging, means the irretrievable destruction of that history. This is the case in Mali.

Mali is one of the poor countries of Africa. Most of its 1.2m sq km consists of the Saharan desert and the sub-Saharan Sahel. Yet it has one of the longest continual histories in sub-Saharan Africa, much of it focused on the extraordinary Inland Delta of the so-called ‘Niger Bend’. Here the Niger does a huge curve northwards and later southwards. The river divides into two main branches and innumerable smaller waterways which during the rainy season cover the flood plain with several feet of water. It is the most fertile part of the country and much of Mali’s history lies buried beneath the mud of ages.

At the heart of the Delta is the vast low mound of Jenné Jeno. Archaeologists from Rice University in Houston working in the 1980s dated that city’s foundation to around the third century bc, making it the oldest city in sub-Saharan Africa and flourishing through the first millennium ad. Current opinion favours the gradual abandonment of the site for the present nearby city of Jenné whose medieval prosperity probably coincided with the foundation and flourishing of Timbuktu, on the north-eastern edge of the flood plain.

The coming of Islam from the ninth century led to the development of cross-Saharan trade routes. Written descriptions of the country and its people followed. These are the descriptions of outsiders – including Arabic accounts of travellers, Muslim pilgrims, geographers, the early sixteenth-century history of Africa by Leo Africanus and later European accounts. There are also strong oral traditions often preserved by ballad singers. Between them the history of the medieval empires that flourished in Mali are chronicled – the empire of Ancient Ghana, destroyed by Almoravid invasions from the north, the Mali Empire from the thirteenth to late fourteenth century, the Songay Empire to the late sixteenth century and so on up to the arrival of the French in the later nineteenth, coinciding with a final imperial flourish with the Tukolor Empire based on a revival of Islam.

But of objects to bring that history to life there is a paucity. The archaeologists at Jenné Jeno found a few remarkable examples of early medieval craftsmanship, some of which are in Mali’s National Museum in the capital Bamako. The site museum itself has three or four objects, and a large warning poster drawing attention to the problems of pillaging. However, neither display can compare with the superb array that featured in the Mali section of the Royal Academy’s 1996 exhibition, ‘Africa: the Art of a Continent’. Most of those came from private collections. Pillaging at Jenné has been much reduced by the recruiting of local guards and local interest in the museum. But elsewhere the problem remains widespread. As the catalogue to the Royal Academy exhibition pointed out, ‘illicit pillaging is doubly harmful; it not only removes the objects but also conceals or destroys the evidence’ as to provenance, age, context and historical associations.

Between the twin commercial hubs of Jenné and Timbuktu, lies the medieval history of Mali. The director of Mali’s National Museum maintains there are thousands of ancient sites throughout the Niger Bend, and at least seventy officially noted in the Jenné region. All but a handful of these have been excavated yet most have been pillaged over the years. The unexcavated sites are pockmarked with holes dug by locals in the hopes of unearthing an antiquity they can sell.

One dealer approached a friend with a jar that she recognised as potentially ancient; she bought it for the National Museum in Bamako whose director, Dr Samuel Sidibe, was delighted to receive it. ‘We have several similar but none with quite this decoration’, he said, dating it to between the twelfth and fourteenth centuries. The jar is divided into seven sections by sacred serpents and perforated with many small holes; a large hole in the base he reckons was made recently by someone hoping to find treasure inside. ‘The only way we can prevent this pillaging is by official excavation. We can then go to the locals, point out what we’re trying to do and ask for their help. Often it’s forthcoming’. In the museum storeroom are stacks of huge funerary jars which locals at one site, Natamato, excavated with the help of the French. They had been persuaded to bring these out of their houses at the urging of archaeologists. ‘Too big to sell,’ said Sidibe. ‘But statues, metalwork, woodwork are gone forever. And our excavations are extremely limited: we just don’t have the funds.’

Most notable in its sparseness, however, is the ‘medieval’ room of the museum. I write medieval in quotes because dates of the objects on display are only approximate; provenance is unknown. And there are few objects. ‘Our people are poor,’ says Sidibe, ‘how can I expect them to resist dealers whose pockets are stuffed with CFAs [local currency]?’

The written chronicle, an invaluable source for understanding Mali’s history, is somewhat less at risk. In 1468 a man named Ali ibn Ziyad al-Kati decided that life in Muslim Andalucia was under threat from the Christians reclaiming the Iberian peninsula. So he headed south to a more sympathetic environment. In his luggage was a priceless collection of Arabic documents; and he had the funds to add to the collection on his way, including an Algerian Qur’an. Eventually he reached his goal in Timbuktu.

The documents - some 7,000 of them - are now in the possession of his descendant Dr Ismail Djadié Haidari al-Kati. This is one of several collections to come to light in Timbuktu in recent years. The documents are housed in a room with no glass on cupboard doors nor in the window; this is opened every morning to air the room. Yet the sand of the Sahara which is always threatening to engulf the city is not the main enemy, neither are the termites against which the room is fumigated once a week. The number one enemy is Man. A burglar alarm cannot be installed because Timbuktu’s electricity supply is so erratic.

Dr Kali is luckier than Dr Sidibe, however. His al-Kati forefather claimed descent from the Visigothic rulers of Iberia whose internecine squabbles had facilitated the Muslim invasion of the peninsula. His ancestors had converted to Islam in the eleventh century and subsequently moved to Granada when their city of Toledo was captured by the Christians. Now Granada, reviving its Muslim heritage, has supplied personnel and finance for the cataloguing and conservation of the manuscripts, hence the Spanish title, Fondo Kati, for the collection.

Unfortunately it isn’t so easy to help Dr Sidibe and his museum. When I left the country there was no attempt to search bags at the airport. Go to Mali – it needs tourists and is most welcoming – and if someone tries to sell you an antiquity, buy it and give it to Dr Sidibe. This would be a small but much appreciated gesture.