Many historical analogies have been drawn to explain the Trump phenomenon. Few have pointed out that the 45th president has something in common with his great predecessor, Abraham Lincoln. Both sought to shape an economy that benefited white working men. 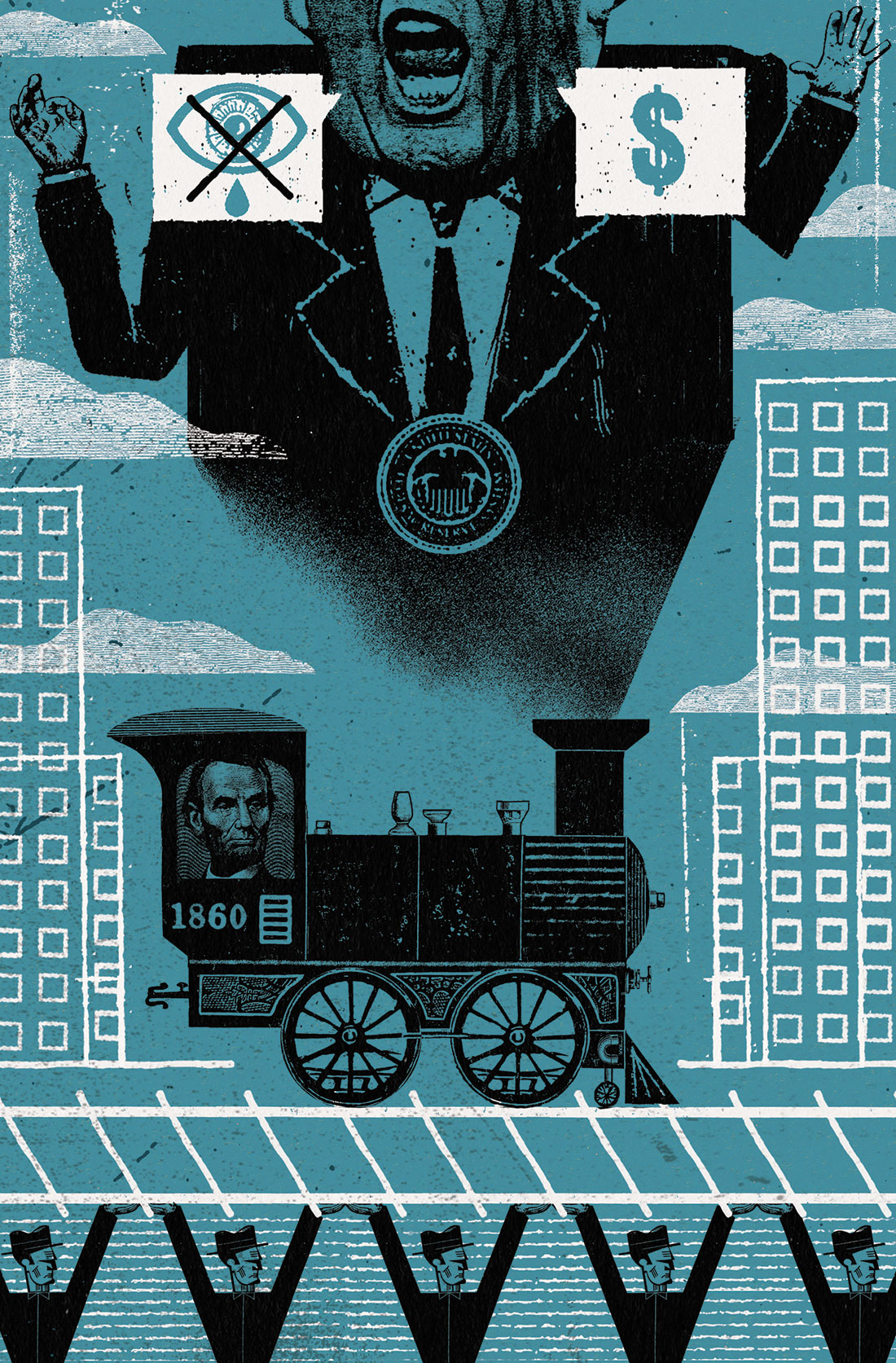 Standing against a glossy backdrop on the stage of the Economic Club of New York in September 2016, Donald Trump, then a candidate for president, promised to ‘put new American metal into the spine of this country’. It was a strange pledge to make to Manhattan’s boardroom elite. Instead of invoking the slick sheen of corporate America, Trump conjured up the grit and dirt of heavy industrial labour, an economy that seemed distant both in space and time.

In the run-up to the election, pundits viewed this dissonance as a shrewd tactic: a way of convincing the working class – and out of work – that this billionaire candidate had their best interests at heart. But all agreed that this was a promise that could not be kept. No politician could return the Rust Belt to its former glory. Trump’s call to restore US industrial might was an example of yet another politician, writing cheques he would never be able to cash.

There is another way to read this campaign slogan. Trump was not making false promises. Instead, he was speaking to a different set of concerns, engulfing communities from Wisconsin and Michigan, West Virginia and Pennsylvania, North Carolina to Tennessee: the fear that they were living in a nation that no longer allowed men to be men.

Trump’s promise was not simply that his protectionist policies would promote the US as a competitor on the world stage. It was a pledge to reinvigorate the body politic, literally stiffening the backbone of the nation, with the power of male labour. It was a guarantee that America could stand strong against foreign competitors, certainly. But it was no accident that Trump chose to highlight his stance against China and Mexico, two nations that have been cast historically as effeminate and indolent in American political discourse. Trump understood that it was not that there were no jobs to be had in the US. They were, rather, the ‘wrong’ jobs; pink collar rather than blue. His speech was a clarion call: a vote for him was a vote for a vision of masculinity that had been eroded and undercut by the vicissitudes of the 21st century.

Such rhetoric was not designed solely for men. Women also heard a promise of something better in his vision of an invigorated masculine role. ‘It used to be that cars were made in Flint and you couldn’t drink the water in Mexico. Today the cars are made in Mexico and you can’t drink the water in Flint’, Trump announced in the same speech. The contamination of the water supply in Flint, Michigan had resulted in miscarriages, lead poisoning and children afraid to drink water in their own homes.

In linking the loss of manufacturing jobs to a public health crisis, Trump connected the deindustrialisation of the US to the idea that men could no longer keep their families, especially their children, safe. Job theft and the loss of traditional male occupations had resulted in a breakdown in the social order and a violation of the sanctity of home. Men in post-industrial America could no longer protect their women and children.

The details of tariff policies are rarely reckoned with as the blood and guts of an election, much less a presidency. But Trump has continued to pursue a protectionist agenda. He killed the Trans Pacific Partnership, took the US out of NAFTA and has waged a trade war with China over tariffs. Despite the fact that economists warn of the consequences of such moves, Trump has not relinquished the policy goal to resurrect trade barriers and craft a new vision of ‘Fortress America’.

Trump has tied such policies to a powerful political legacy. In a speech to Congress in June 2016, he invoked the talismanic force of Abraham Lincoln to justify his protective policies. ‘As the first Republican President, Abraham Lincoln, warned’, thundered Trump, ‘“the abandonment of the protective policy by the American Government [will] produce want and ruin among our people”.’ As others have noted, Lincoln’s policies were products of a different political moment. On one level, the analogy was empty. But in some ways Trump was right to invoke Lincoln. At the core of both of their ideologies was a shared sense of how the nation had a responsibility to shape a political economy for the benefit of white men.

When Lincoln ran for president in 1860, he laid out a political agenda for the US. In a speech in Chicago, which became the platform for the Republican Party, he commended the tariff as the policy which would ‘[secure] to the working men liberal wages … to mechanics and manufacturers an adequate reward for their skill, labour and enterprise’. Unlike Trump, Lincoln could draw on his own experience in advocating this plan. He had lived the trajectory from log-splitter to presidential candidate. Hard manual labour had been his ticket to opportunity. Instead of being ‘fatally fixed for life’ in a condition of dependency and poverty, he had benefited from just reward for his labour. But Lincoln feared that hard work would not be enough. Americans needed to transform their economy to protect those who laboured within its borders. For Lincoln, the tariff was the way to ensure that working men would not be the victims of free trade.

Lincoln was not attempting to protect Americans from imports coming from Mexico and China. But he was trying to protect the nation from the depredations of globalisation in a different sense: he sought to limit the power of a slave economy. In 1860, pro-slavery advocates were among the most vocal proponents of free trade. Rooted in an economy that depended on its ability to export staple crops, especially cotton, to a global market, planters in the South relied on cheap imports for both their necessities and luxuries. Slave owners sought an expanding cotton kingdom that profited from the free movement of goods across the globe.

Lincoln’s constituents did not live in this kingdom. As manufacturers and labourers, they could not afford to be undercut by the flow of cheap goods in to the nation. No wonder they sought to protect themselves from the ‘raw head and bloody bones’, the ‘monstrous prices and murderous profits’ that came from unchecked global trade. In the wake of the Panic of 1857, there had been renewed interest in finding a way to limit and regulate the market. Protection was perceived to be a way to enable men to prosper as a result of their own labour, rather than the fluctuations of the market. It made them masters of their own destiny.

Such mastery was contrasted with the type of men who lived in the Cotton South. Frederick Law Olmstead, a writer, social reformer and Republican, toured the ‘Cotton Kingdom’ in the 1850s and chronicled the ways in which the political economy of slavery destroyed American manhood. His descriptions revealed a world where men were made lazy, uncultivated and weak-willed, in a system that did not prize the learning of a trade or the habits of hard work and industry. Such indolence led to a society where men did not create homes fit for their wives and children. They lived in shacks and shanties, scantily furnished, with no comfort or propriety. Women were afforded no opportunity for modesty. Olmstead wrote that he had slept in more than one room where the lady of the house had to undress right in front of him. ‘I hardly know whether to chronicle it as a border barbarism or a Creolism’, he wrote.

For men like Olmstead and his readers, that fact alone illuminated their truth: that the free trade South was a hotbed of weakness and immorality. Lincoln’s call for tariffs then, like Trump’s, was not economic calculation alone. It was a vision of America, where hard working white men could prosper and create homes for their families that would safeguard the moral values of the nation.

Olmstead’s critique also revealed the racial dimension of this ideology. The vision of a nation peopled by hard working, wholesome men was also that of a white man’s world. It was no accident that Olmstead called those men who did not work and could not provide for their families Creoles and barbarians. These were the identities of racial others: black, Asian or simply outsiders. Men and women from across the political spectrum believed that those outside the white race could neither work hard enough nor create a home virtuous enough to claim their place in the protected political economy. In the decades after the Civil War, the belief that hard work and prosperity were the white man’s alone to claim became deeply embedded in the political rhetoric of the day. Protectionism became a way of safeguarding not only the nation’s trade across borders, but also the heartlands, the livelihoods and homes of white men. These are the deep-rooted links that exist in the US between a protected economy and racialised masculinity

Trump’s presidency has been a moment of reckoning for American manhood. From his comments about ‘grabbing pussy’, to his support for Brett Kavanaugh, many see his leadership as an endorsement of a ‘toxic masculinity’ that revels in asserting a violent power over women. But this is not the only brand of manhood Trump is selling. It is a masculinity that purports to offer white men power over their own lives: Trump has connected to the resurgence of a protected economy and an attack on global free trade, that has caught the attention of many Americans. For these men and women, this is not toxic masculinity. Unable or unwilling to see its racist foundations, supporters of Trump’s economic policies envision the return of mastery to the hands of men. In Trump’s vision, they see the legacy of the morally righteous power that built the nation of Lincoln and which confronts the perils of globalisation. Trump’s critics will have to reckon with that past if they want to convince Americans that free trade is the future.